It’s fascinating to know that British director Christopher Nolan—who today, after the success of his Batman trio, Inception, and Dunkirk, is able to fetch a budget of $200-225 million for his most recent work Tenent—first gained critical attention from a “no-budget film” Following which he accomplished basically alone, with the help of his wife Emma Thomas, and just a few supporters for about $6,000.

The 1998 film, released in 1999 in the United Kingdom, was carefully and artfully directed in black-and-white in part to cover the fact that he didn’t have the proper lighting fixtures to shoot in color and using high-grade sound systems only in a couple scenes, including the opening to alert the viewer that he was intentionally featuring an inferior sound product later when one might hear the whir of the camera itself.

The most important thing was the use of his own intelligent script based on some of the conventions of film noir and the rehearsal of his actors so that there would be few if any second takes.

But it is the wit of this film as well as its numerous use of intercuts and a breathtaking confusion of character motives that help to make this film far superior to what it might otherwise have been— a kind of knock-off of noir conventions where we can never quite be sure who is deluding who and who precisely are the villains.

We certainly would never suspect the film’s rather grubby (critic Eric Villa-Boas calls him “schlubby”) young man (Jeremy Theobald) who a bit like Knut Hamsun’s would-be novelist in Hunger, also without a name, begins suddenly to follow different people he encounters on the street. Unlike Hamsun’s starving journalist, however, The Young Man (as the script names him) has never written anything and does not necessarily follow women for the potential of romantic adventures—although that does later happen—but simply, pretends an interest in people, to discover who they might be by exploring where they go.

To rid himself of any idea of voyeuristic associations with these acts, The Young Man applies rules. At first he cannot follow the same person more than once, and he must stop following the person if he discovers in the process where they work or live.

The first rule alters a bit, but the second and other rules he holds himself to change only when he is caught in the act by a rather well-dressed man he has followed several times who confronts him in a restaurant about is observed actions. The man, Cobb (Alex Haw), interrogates the guilty “writer” at length—are you bored, lonely, a faggot?—before finally explaining that he is a house robber, who randomly breaks into people’s homes not to obtain money (although he does sell anything worth money to a fence), but simply to find out about their personal lives, stealing the secret trinkets that most people have in a hidden-away box, just to remind them of what they had and have now lost, as if he were a kind of immoral moralist. And he now offers our schlubby hero a chance to join him. 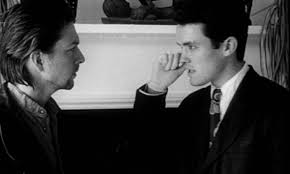 If Cobb’s activities sound innocent—the only things of value he steals being CDs, a few books, or an occasional piece of inexpensive jewelry—it truly represents a kind of voyeuristic intrusion upon his victims’ lives, since he uses these mementos and curios to assess who they truly are. He is experienced enough to know where they might hide a key, their age(s), their level of education, and if they are living with someone and if so, for how long. What do their photographs suggest about them? Do they own pornography?

Obviously, it doesn’t take long for our poor witless “writer” as I will call him, to be hooked. And Cobb quickly offers him the chance to track down their next “hit.” We also know that the young “writer” has already become intrigued by a young woman he has followed, The Blonde (Lucy Russell), who we see him encountering and talking to in a bar owned, we soon find out, by The Bald Guy for whom she was once his mistress and of whom she is still terrified. But that scene, which occurs outside of the narrative logic of our story, will force us to begin questioning our sense of what is truly going on in the “plot.” 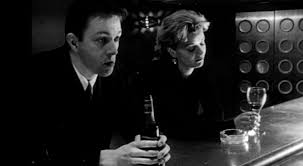 The young writer actually chooses his own place as his first choice of a hit. Cobb, recognizing that the tenant is clearly a starving would-be writer, angrily scuttles the robbery, describing our young friend as a failure for not having properly scouted out the victim. In fact, we much later discover—just to show you how unreliable Nolan’s narrative truly is—he has known it was the “writer’s” abode all along; as he later jokes to another figure, “the key was even under a mat that he probably went out and purchased just for the event.”

In short, no one is quite to be trusted. The next apartment they burgle is The Blonde’s rather swanky place, where while our hero chooses to take a few CDS and her candelabrum, Cobb seems more interested in her sexy undies and her box of secret possessions consisting of a few childhood photographs, a seahorse, etc. He takes one pearl earring while hiding another in the piano bench. 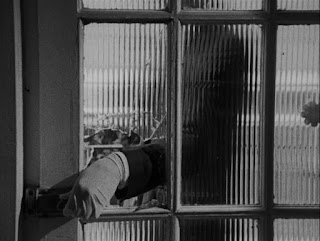 Not only is our boy now addicted to danger, but Cobb suggests he stop going around looking like he’s a potential burglar, that he cut his hair and dress up, the advice of which The Young Man takes to heart.

Cobb has risen a step or two in affecting that transformation, for he is no longer anymore a mere nosey voyeur and perverted moralist, but a kind of reformer, a sort of Pygmalion able to transform this dirty boy in his Galatea. Having queried the “writer” whether or not he was a faggot, he now hints that their may something a bit queer about his continued interest in his protégé. 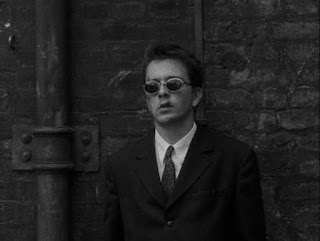 The Blonde tells the Young Man of this robbery when he earlier meets her at the bar. In other words, the viewers themselves have already been set up for this particular event, which helps us believe in her credence. What a surprise, accordingly, it is that soon after we see Cobb and The Blonde together in the same apartment, obviously having both enticed the unknowing hero into some kind of trap.

We soon discover that the real trap may be connected to The Blonde’s request that the “writer” burgle the safe at the bar where The Bald Man is evidently holding some intimidating photographs of her as blackmail. She, conveniently, has the code for the safe, within which our stooge finds not only the envelope of photos which he has promised not to open, but a great deal of money which he duct-tapes to his body. In the process of wrapping himself up a bit like a mummy, someone shows up whom, in his fear, he bludgeons-to-death with the hammer he has brought along (Cobb having advised him to carry a claw-hammer or a just a simple hammer on every job).

Terrified by the turn of events, The Young Man is ready to turn himself into the police, but first receives a call from The Blonde asking him to come over immediately. With suspicion finally creeping into the crevices of his muddled head, he opens the forbidden envelope he has retrieved from the safe only to discover ordinary modeling pictures of her.

Arriving at her apartment if for other reason than to confront her, he perceives that she is in the company of Cobb, who is worried, so he tells the young hero, because he has been seen in the apartment of an elderly woman who he discovered to be dead. Obviously, The Young Man has been set up for the murder, even primed for it, without any obvious alibi. He now even looks somewhat like Cobb.

But Nolan has one more terrible secret to spring upon the hero and his audience. Earlier in the work, when The Young Man has asked The Blonde just how dangerous The Bald Man is, she described an instance when he brought a man who owed him money to her apartment with a couple of his criminal thugs. When the debtor couldn’t pay up, they took a hammer to each of his fingers before applying it to his skull.

The Bald Man, suggests Cobb, tired of The Blonde’s exorbitant blackmailing, has ordered him, as his closest henchman, to take The Young Man’s hammer and perform the same acts she previously detailed upon his beautiful blonde friend.

A continuation of the interview with police from the first scene of this movie reveals that there has been no old woman found and no evidence of a previous murder in The Blonde’s apartment; but there there is plenty of proof that the young nameless one has been in contact with the now murdered Blonde, the blood of her body being one of two kinds discovered upon the hammer, as well as a box of her curios found in The Young Man’s apartment, and the photographs containing his fingerprints. He even have, so they report, discovered one of her earrings in his room.

There is no one named Cobb, no evidence of what The Young Man has described as his hide out. Meanwhile they have traced a stolen credit card—given him earlier by Cobb—with his signature upon it. If the young would-be writer has never yet written a word, he, nonetheless, has been very actively involved in a criminal life without his knowledge.

In the boy’s slavish belief in Cobb and readiness to be manipulated by the stranger perhaps there is something queer about him after all. Having just watched Tom Kalin’s Swoon from 7 years earlier, I learned that there is perhaps nothing a weak man might not do to keep on the good side of evil.

The 1997 short by Nolan, Doddlebug, which appears on the same Criterion disk, seems in its tory to have come straight out of one of the episodes of Rod Serling’s The Twilight Zone. A man besieged by some crawling insect keeps trying to kill it by splatting its body with the heel of his shoe. Time and again he misses, or the wily bugger is no where to be seen.

Finally, he sees a piece of cloth moving and quickly removes it only discover a tiny version of himself hovering in fear beneath. He takes up his shoe and brings it down hard to kill his other, while in the background we notice a giant replication of him about to repeat the same act upon him.

Posted by greenintegerblog at 1:49 PM