Daniel Mann | Lost in the Stars

Alfred Hayes (libretto, based on the play and lyrics of Maxwell Anderson), Kurt Weill (music), Daniel Mann (director) Lost in the Stars / 1972

At a certain point in high school—I don’t remember the year—anyone who read books (and in my class I believe there were very few us) was asked to read Alan Paton’s 1948 novel, Cry, the Beloved Country. I did, probably feeling very righteous for doing so, as I did in performing James Weldon Johnson’s “Go Down Death” and, a year later Yevgeny Yevtushenko’s “Babi Yar” the following year at the Iowa State Speech contents; I won blue ribbons on both occasions.
I probably even cried after reading Cry, the Beloved Country, although I don’t believe we had a single black family in our town of Marion, Iowa, just somewhat enlightened teachers. Yet, strangely, I don’t remember anything today about Paton’s book, even after seeking out the opera based on it Lost in the Stars by Kurt Weill and Maxwell Anderson (1949), filmed as the eighth and last part of the American Film Theater’s series, with Daniel Mann directing and a revised libretto by Alfred Hayes.
Nearly every critic agreed that the film was a disaster, and I was certainly not impressed with it, set as it was on-site in Johannesburg, South Africa and elsewhere in a small Zulu tribal village and a Johannesburg shantytown all in bleached out colors common in badly-lit early 70s films, this from 1972. 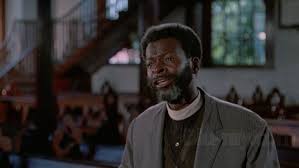 “From the way that Daniel Mann has directed this film version, it seems to be a work completely dependent upon the conventions of the stage.In the theater we accept illiterate characters who sing Broadway-type lyrics and we pretend that the lyrics are poetry. We also accept startling narrative coincidences because, after all, the stage is so small that the most unlikely people might well bump into one another—and often do when dancing. Mr. Mann has apparently had no idea how to create an equivalent reality in a film that appears to have been shot mostly on exterior locations meant to simulate those in South Africa, where the story is set. One result is a kind of aimlessness that pervades the film. The camera doesn't seem to know quite what to do when a character bursts into song over a real washtub in a real backyard. It seems almost embarrassed, as you might be if the person next to you in the subway suddenly launched into a full-throttle ‘Some Enchanted Evening.’”

When the film appeared on DVD, Time Out New York dismissed it as “a series of well-meaning clichés,” Film Threat argued that this was not the classic gone missing that one had hoped for.
Almost all critics lay the blame on Daniel Mann’s shoulders, and there is a great deal of reason to do so. Mann, acclaimed by some as a major Hollywood director, was the kind of 1950s and 60s craftsmen who generally put rather overwrought if well-constructed soap-operaish dramas such as William Inge’s Come Back, Little Sheba, Tennessee Williams’ The Rose Tattoo, Peter Shaffer’s Five Finger Exercise, and John Patrick’s The Teahouse of the August Moon on film. All were significant dramatic hits of the day which are now recognized by most younger playwrights as the kind of theatrical warhorses they have long struggled to topple, mostly with success. These dramas all creak with their well-meaning intentions about speaking out about the hell of unloved matrimony, adultery, alcoholism, and the inability of US Americans to comprehend cultural differences, just the kinds of concerns which might attract Mann to this musical and, in turn, convince producers that he might be the perfect match for the subject.
The new librettist, Alfred Hayes, moreover, was of the same ilk, most noted as an uncredited writer for The Bicycle Thief, one of the most sentimental of all neo-realist Italian dramas, and screenwriter for Nicholas Ray’s The Lusty Men in which Arthur Kennedy and Robert Mitchum duke it out over Susan Hayward. The critics of the Weill musical were particularly dismissive of his decision to delete the final reconciliation between Reverend Kumalo and the South African white bigot James Jarvis. 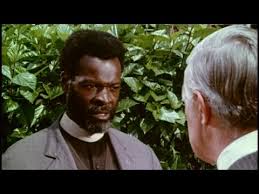 Actually, I believe Hayes was correct in making that cut. In 1948 such an unexpected intersection of black and white division might have been seen as redemptive set against the bleak picture of the racial divide Paton presented, but by 1972 when Apartheid had settled into become part of the very fabric of that country’s political and social reality (it would ultimately last for 50 years), any attempt for the father of the son who unintentionally killed the bigot’s son might only seem as condescending if it were at all to be believable. Even in the movie, the remnants of such a reconciliation, when Jarvis argues for Kumalo to remain the pastor to his church smacks of an attempt to keep his black neighbors’ minds on the spiritual instead of seeking out political solutions for their plight. In short Jarvis fights for the status quo when Kumalo, in rejecting his pastoral role is also proudly, if painfully, breaking with all that has come before the hanging of his Absalom.

The real problems with this work, I would argue, go back to Paton’s own writing and, more particularly, with Maxwell Anderson and Weill’s adaptation. 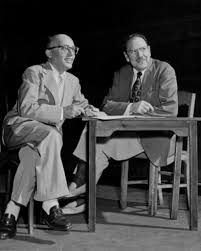 Writing in the late 1940s and 1950s, Paton was one of a generation who felt that by transforming the larger problems of historical racial and other social divisiveness into the specific, and contextualizing those issues into the framework of biblical and highly literary conceits they could bring everyone to comprehend the basic issues. It was noble and idealistic viewpoint which one cannot help but admire. But the problem was not that people, particularly South African whites—just like US whites who continued to adhere to racist views—couldn’t perceive the horrors and chaos they had wrought on people of color, the most right-wing believers are still convinced, that it was necessary and justified in order to protect the society as they imagined it should be: white, patriarchal, class-structured, and conservatively religious, and that anything and anyone that got in the way of those values simply had to be destroyed at any cost.
The synecdoche that Paton and used to speak for his concerns had little effect on those who could care less about the specific in their demand of their general ideology of hate. And all the semi-religious and literary trimmings that came about with titles such as Paton’s and numerous other such lesser high-minded writers, while attractive to the bourgeois, only further alienated the convinced bigots who had no use for flowery language in the first place.
It was the time of dozens of such aspirational as well as just romantic conceits. I need only call up my memory of the Book-of-the-Month Club titles my mother had collected on her reading shelf during those years:  From Here to Eternity; The Silver Chalice; East of Eden; The High and the Mighty; Time and Time Again; Not as a Stranger; The View from Pompey’s Head; Never Victorious, Never Defeated; The Man in the Grey Flannel Suit; By Love Possessed; Atlas Shrugged; The Ugly American; Too Late the Phalarope (another of Paton’s fictions)—and dozens of others. The important film directors from that same period, Nicholas Ray and Douglas Sirk used similar titles such Rebel without a Cause, Inherit the Wind, Imitation of Life, All that Heaven Allows, and Magnificent Obsession to attract their readers to their deconstructions of the similar social and political problems.
These were just the kind of sentiments to which Maxwell Anderson, who wrote some very excellent plays and film adaptations before turning to historical dramas and verse dramas—one of his most noted of which was Winterset concerning the Sacco-Vanzetti trials—was attracted to. In his libretto of Cry, the Beloved Country, indeed Anderson takes this kind of over-heated language from Paton, pairing it with long verse-like lines while occasionally making a kind of jarring use of simple end-rhymes, the result of which stultifies natural lyric intentions Weill might have had.
While agreeing with me about the unsuccessful images and philosophical vision of this work, Canby still praises Weill’s music:

“The music almost compensates for the foolishness of the images, the lyrics, the drama and the point-of-view, which, in spite of the ending, recalls the "ain't-black-folks-noble?" philosophy evident in so much well-meaning theater of 40 to 50 years ago.”

But I think even Weill is just not at home in the long choral-like antiphons demanded by Anderson’s clotted lyrics that make up most of the work. His compositions work better, given his long-time ironist stance and his jazz-infused dissonance that fleetingly appears in the long dance 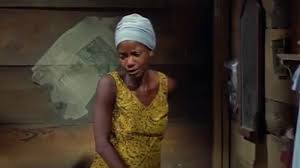 number at the bar before the attempted robbery and in Irina’s song “Trouble Man.” Of course, there is a kind of splendor to the major song of the musical, “Lost in the Stars,” but it only reminds me of the operatic possibilities which might have saved this finally fragmented work based on the very best of intentions.

Posted by greenintegerblog at 11:11 AM