taking a leap by chancing a fall

A group of five young boys (played by Nil Cardoner, Roger Príncep, Biel Estivill, Pal Hinojosa, and Arnau Aizpitarte) gather together high on the roof of an apartment building in order to watch on the roof below a woman (Carla Guardia) who daily bathes in the nude below.

Like most adolescent males, these four acne-stricken boys and one younger kid who’ve they’ve permitted to tag along, are almost thunderstruck by the beauty of the blonde who appears in a white shift which she quickly lifts away, revealing a string bikini and her bare breasts. Watching through binoculars which they greedily try to pull away from another, the leader of the group, Adrián grabs his crotch as he declaring he’s got a hard-on. 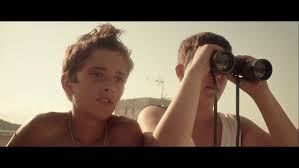 They all seem disappointed, however, when she sits down, her back to them, to take in the sun. All, that is except one, who has not reached for the binoculars but has been staring over at another roof somewhat above the one which captures the others’ attention to observe a male (Carlos Noriega) strip off his clothes to reveal his tight ass, as he showers in preparation to himself take in the sun.

No, insists the kid once more, I saw where he eyes were looking…toward the man. Again, the accused boy denies it, while his peers now come to his defense, turning their hostility to the youngest. To prove his masculinity they tell the kid, he must stand on the narrow ledge slightly above them to shoot a snap of the woman from that vantage point.

Terrified on the danger involved, he refuses, but the ring-leader, again calling him a faggot, declares the only way he can prove his denial is to take the photograph. Once more, he cowers in fear, the camera pulling back a little so that we can better see the height at which they are demanding he stand.

The boy originally accused by the younger now suddenly comes to the child’s defense, arguing that they should leave him alone. But his intrusion into the scuffle only further puts his sexuality in jeopardy, as he and the ring-leader threaten one another with possible violence. When the boy interested in the male figure is threatened, he momentarily backs off, but when they again challenge the younger kid to take the photo, he once again insists they release him, insisting that he will instead take the photo. 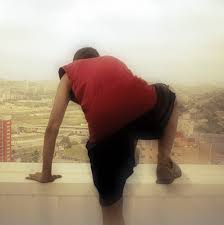 They hand him the camera, and he carefully climbs to stand on the narrow ledge, at one moment almost appearing to fall, but regaining his balance as he finally snaps the shot. Back on safe ground, he shoves the camera in the ring-leader’s face, the others gathering round to ogle at the image.

When they call up the photo it is the showering man with his buttocks in full view.

They now all turn on the boy, calling him a "a fucking gay prick" and all the names in the teenage vocabulary for anyone who does not share they sexual desires.

The final scene shows the same boy bicycling away from all the others, having obviously come to realize something about himself that perhaps he has never before known or, even if he has perceived his sexual differences, has certainly never before publicly avowed it. And we now realize just how brave the boy was, not only to put his body in danger upon the ledge, but in daring to put his entire relationship with his former friends and others who will certainly hear of this occurrence in jeopardy.

If this short film is a simple one, it is nonetheless highly revealing of what anyone who suddenly admits to a sexual reality different from the so-called “normal” one must face. If he, fortunately, has not fallen from the ledge, he has now leaped into a world that puts in a more long-lasting peril.

Posted by greenintegerblog at 12:43 PM