dragging out the dragons

Édouard Molinaro’s 1978 movie La Cage aux Folles is the kind of LGBTQ masquerade which liberal straights absolutely adore. How could they not given that this travesty nicely plays up the Rainbow Coalition’s agenda by portraying the narrow-minded vision of the establishment—in this case the Charrier family, Louise and Simon (Carmen Scarpitta and Michel Galabru), the latter of the two who represents the conservative government’s ministry of family values—while re-establishing the fact that two gay men can very effectively raise a child, in this case their handsome son, Laurent (Rémi Laurent), while at the same time awarding its audience with an outrageously campy spoof whose central action is located in a gay drag cabaret. It succeeds in attaining its viewers’ sympathy quite easily by serving up gay, transvestite figures who most of its core audience might never encounter in the real world, thus making them feel absolutely safe to emotionally dote on the symbols these absurd characters presumably represent. I apologize for forgetting to mention the fact that as pure farce this work is also occasionally funny. Yes, at moments even I laughed each of the couple of times I’ve viewed this. 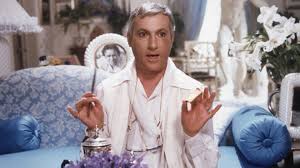 I often forget that given the fact that the outrageously effeminate male at the center of this family, Albin Mougeotte who performs under the stage name of “Zaza Napoli” (Michael Serrault), swishes and sways across every room he crosses as if he were maneuvering his steps upon a moving camel’s back while screaming out at the slightest of surprises and delights as if he had just spotted a herd of mice heading in his direction. I have nothing against effeminate men but actors, gay or straight, who perform as if in a Punch and Judy show while supposedly embodying a semi-naturalistic comic figure simply don’t tickle any bone in my body—let alone the funny one! 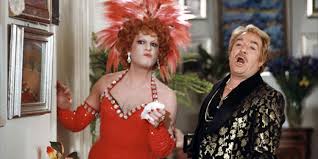 The partner of this jittery gasping machine, in this case Renato Baldi (Ugo Tognazzi) who finds his always exasperating lover to be a load of laughs, accordingly, simply confuses me, as if instead of playing someone who might represent a modicum of sanity he has instead wandered in from the audience who get their chuckles from this really rather drab portrayal of human beings as one might imagine them if one lived on Saturn.

While I often used to agree with Roger Ebert’s kinder assessments of the films he’d seen, this time round I agree with his former fencing partner Gene Siskel, who wrote: “"For me, La Cage aux Folles was over soon after it began. It's all so predictable. This could have been a Luci & Desi comedy routine.” Ebert, who could not bear with the empty stereotypes of Andy Warhol’s films, found this “cage of madwomen” to be filled with "comic turns in the plot [that] are achieved with such clockwork timing that sometimes we're laughing at what's funny and sometimes we're just laughing at the movie's sheer comic invention. This is a great time at the movies."

The “great time” Ebert was apparently enjoying has to do with a rather simple plot. The son of the owners of this disreputable cabaret wants to marry the daughter, Andrea, of the moralistic Charriers. The family insists upon meeting the cultural attaché to Italy—the position Laurent has  cooked up for his wayward father—and his mother before they can proceed with the wedding in which Simon now sees as a favorable alternative to the fact that the current head of government, whose administration Simon represents, has just been discovered dead in the arms of a prostitute.

Laurent’s birth mother, who hasn’t set eyes on in years, is simply not the maternal type, she admits, despite Renato’s pleading that she attend the dinner. But what to do with Albin-Zaza and their black barefoot butler, who hired by Albin, is more comfortable with wearing women’s beachwear? And what to do with their living and dining rooms that were surely decorated by a legion of mad interior designer queens? 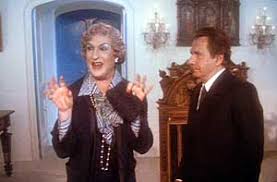 When Albin attempts to resolve the problem by showing up in housewife drag, chaos is suddenly afoot, especially when suddenly now two mothers congregate in celebration of Laurent’s impending marriage and the journalists for a gossip paper have planted themselves at the Baldi front door.

Even if the celebrants below look a bit like the visitors at the bar in of Star Wars the audience can easily predict the inevitable solution: put the hypocritical Charriers in drag and drag the dragons out the downstairs door. 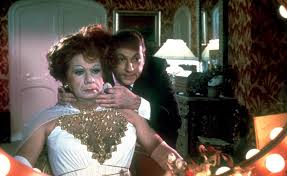 The wedding is a small affair even if the easily offended Albin fills it up with his self-absorbed howls, to which movie audiences apparently screamed with pleasure—as presumably the producers also did since the film sold over 5 million tickets in France and another 3 million in Germany, and the US remake (about which I’ll write sometime in the future) was also a roaring success.


Posted by greenintegerblog at 12:13 PM