François Ozon’s short of 1996, A Summer Dress, is almost a formalist film in which its simple structure plays on lyrics of a song which Sébastian (Sébastian Charles) performs before his lover Luc (Frédéric Mangenot) in an attempt to entice him into sex.

We know absolutely nothing about these two beautiful young boys except that they are apparently on vacation near a quiet beach. But we do sense that there is some friction between the two gay lovers, particularly when Luc’s first words to his friend Sébastian are “Shut up!” Luc seems completely disinterested in his friend, his own devotion evidently being to his tanline.

As his lover seductively waves his ass in rhythm to his dance while lip-synching the 1960s French pop singer Sheila’s version of Sonny Bono’s “Bang Bang (My Baby Shot Me Down),” Luc openly expresses his irritation. 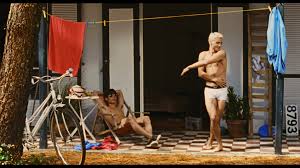 The dyed blonde-haired Sébastian, we also note, is a bit effeminate, and Luc chastises him for singing “fag” music and performing outside where everyone might see him before he shuts the music off, which Sébastian immediately starts up again, forcing Luc, as he himself insists, to leave—much as the song also decries—without saying goodbye.

What we do now realize is that these two males are having some sort of difficulty regarding notions of masculinity. Indeed the song itself calls up some of those issues, particularly as Sheila and Cher before her sang it, putting the emphasis not on the narrative of lost love the way Nancy Sinatra (whose recording as used in the film Kill Bill) and Lady Gaga do—both treating it as a quiet love ballad—but upon the words signifying the sound of the gun of the childhood cowboy game, suggesting that the singer and her relationship had died even before her lover left as an adult without saying goodbye.

I was five and he was six

We rode on horses made of sticks

He wore black and I wore white

He would always win the fight

Bang bang, he shot me down

Bang bang, I hit the ground

Bang bang, my baby shot me down

Seasons came and changed the time

When I grew up, I called him mine

He would always laugh and say

"Remember when we used to play?"

Bang bang, I shot you down

Bang bang, you hit the ground

Bang bang, I used to shoot you down

Now at the beach, Luc begins to go in for a swim before continuing his sunbathing, but quickly goes back to his blanket to strip naked, the beach being empty, before entering the ocean. 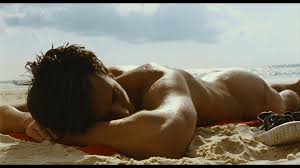 When he awakens from his tanning slumber, a Spanish girl, Lucia, hovers over his naked body asking for her cigarette to be lit. She settles in the sand next to him and without even missing a beat invites him to join her in the woods. When he asks, “And why,” she explicitly tells him “I want to make love.” If he laughs, a bit hesitant for this sudden invitation, he is clearly also interested and quickly takes her up on the offer, both of them soon finding a spot, undressing, and proceeding with sex. In the midst of coitus, however, he spots a man in the distance watching them, she implying with her answer, “Forget it. Close your eyes,” that the voyeur might almost make it more interesting. We also later note near the end of the film that Luc is once again wearing his orange bathing shorts.

We can only imagine that the man overseeing the act might be Sébastian and we must presume that the same thought surely has crossed Luc’s mind. Indeed, after the sexual act, he almost apologizes, not for the sex, but for his lies. He has had sex before, although with a woman, and he is not vacationing with his family. She immediately recognizes him as a “gay boy,” congratulating him for providing such pleasure to a woman.

When they return to collect his clothes, however, he finds both his shorts and towel to be missing. She ruffles through her bag but can come up with only the dress she was wearing over her bikini suit for him to slip on naked body for his bicycle ride home. And he has no choice but to put on the dress and pedal off, a passing car honking him presumably for his aplomb in wearing the flowered shift. 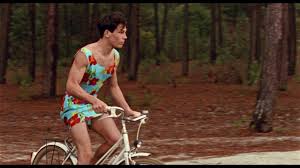 Upon reaching his and Sébastian’s vacation flat, he suddenly greets his lover with an apparently renewed energy, kissing him while still in the dress, and allowing himself to be immediately dragged into the room where Sébastian repeats the sexual act Luc has just performed on Lucia, even ripping some of the g irl’s dress in the process. If nothing else, we quickly recognize there has been a major switch in both their senses of sexual prowess as well as an alteration in their personal notions of the standard cultural dichotomy of what it means to be masculine and feminine. If Sébastian previously was referenced as a feminine queer “fag,” he now is dominate to his new male-in-drag lover.

In other words, their entire sex life has been reversed in a way that also echoes the lyrics of the Bono song as their actions have repeated the explosive chorus of “Bang bang, bang bang,” Both gay men, in alternative ways, are banging a female figure in an attempt of restoring their masculinity.

I’d argue against Ozon’s apparent concern with the masculine/feminine dichotomy. If some critics such as Thibault Shilt, writing in Senses of Cinema, suggest that the director is exploring these boys’ sexual fluidity as they find new and innovative ways to keep their love alive, to me it appears as simply another way of shuffling normative notions of sexual identity, even if there is also a somewhat comic element to all this “banging.”

Ozon’s films often frustrate me in just that way. Yet, they are nonetheless always interesting for the passionate responses they invoke. And no one who loves film can deny his cinematic skills in investigating various aspects of the LGBTQ community.

Posted by greenintegerblog at 2:42 PM