One might almost describe Jan Oxenberg’s quite hilarious A Comedy in Six Unnatural Acts, with its purposely low-budget cinematic values and its clever series of titles for each section—"Wallflower,” “Role-Playing,” “Seduction,” “Non-Monogamy,” “Child Molester,” and “Stompin' Dyke”—as belonging to the genre of high school information films of the 1940s, 50s, and 60s  reflecting anything young people might need to know about subjects from “How to Bake a Cake,” and “How to Change a Tire,” to “How to Drive a Stick-Shift Car,” and “Beware the Attentions of Older Men Who Invite You In for Candy”—generally written and filmed by adults who knew very little about these subjects.

Except, of course, Oxenberg obviously does know a great deal about the lesbian stereotypes she’s exploring, the humor deriving from the pretended naiveté of the teller coupled with the  ignorance of the heterosexual and even parts of the gay communities who might attend her cinematic lectures.

In each of the six instances, Oxenberg presents a seemingly real lesbian “type” either based on elements of what to some are apparently truthful observations or the absolute stupidity of anyone attempting to characterize an entire community on the basis of a few (mis)observations which she ludicrously performs while deconstructing the myths they entail.

As high school students didn’t we all believe that wallflowers were unable to get boys because of their appearance and behavior or perhaps their simple disinterest in the opposite sex? Of course, nothing—particularly in Oxenberg’s films—is really that simple. As the wallflower disk jockey stands by her records, the view she has of the rest of the room tells us what it truly means for the other women who have found their “men.” A young scruffy greaser dressed in a leather jacket dances slowly to “Angel Baby” with his gal who has poured herself into a too tight-sweater, a blandly handsome jock rests his head on a girl who surely will become this year’s homecoming queen, a nerd in a horizontally striped T-shirt with its cuffs rolled up to hide a pack of cigarettes pumps away with his willing bobbysoxer, and a tall guy with slicked-back hair pulls an acne-cheeked girl half his size across the room. Each of these mostly self-satisfied males put their hands on various parts of their female partner’s body before they are pulled away or slapped off. Nonetheless, just like the song’s lyrics claim, they’re all in “heaven” with their “angel babies.” 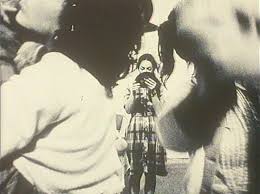 Meanwhile the so-called wallflower peers through the large hole of a 45 rpm record as if it were the lens of a camera, seeing what we see: a bunch of pitiable sweaty teenagers who before the night’s out might well get a kiss or two to replace what they all truly want.

Suddenly our seemingly lonely disk jockey sees something off camera that immediately puts a smile on her face. A tall blonde lesbian beauty comes over to her as they quickly kiss, obviously just the beginning of a night which for them likely holds many other delights.

In “Role-Playing” a lovely woman is seen dressing for a date, forcing herself into a men’s tie before sitting down before the mirror to grab glob after greasy glob of hair cream to slick her handsome head of hair back the way the curly-haired male greasers did in their day. In some respects, she is doing precisely what heterosexual women do in their preparations for dates, but by using the tools of male grooming instead of the brushes, sprays, and perfumes of the normative female, we see just how ridiculous the whole process is. Surely she looked far better in her simple black sweater and shortly trimmed hair before she started to dress.

The “role-playing” the inter-title suggests is not about a woman dressing up as a man as much as it suggests the entire process of reconstructing one’s appearance, whether male or female, to match some sort of ideal that presumably the other expects. The final touch is predictably a bouquet of flowers to award her evening partner. 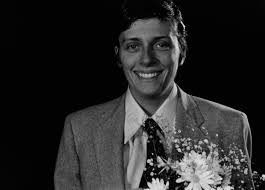 Oxenberg, however, turns even that process on its head when upon ringing the doorbell of the date’s house, her character is met by another woman dressed precisely as she is with a similar bouquet of flowers in hand. The two exchange flowers, hold hands, and march away to the concert they are about to attend.

As Michelle Citron writes in “The Films of Jan Oxenberg: Comic critique”: Oxenberg carefully codes sequences in particular ways to ensure a predictable cultural reading of the codes by the audience. For example, in "Role-Playing," she relies on our reading that the woman wearing a suit and tie is a "butch" who, we think, will of course date a "femme" in order for Oxenberg to make her joke.”

Our very presumption that opposites attract is quickly laid to rest when, in this case, it is butch on butch or perhaps better expressed, a woman with woman since the director has popped any balloon of meaningless assumptions with the pin of truth.

In “Seduction” the director places two lesbians on a living room couch where they quickly find common ground in their discussions of journeys to various off-trail camping sites, listing their experiences with like-minded friends visiting isolated canyons and wilderness spots that are seldom visited even by park officers. When they quickly begin discussing a time when they might get together to compare maps we have almost entered the old male gay territory where one invites the other to come upstairs to see his etchings. We know these two will get on very nicely. 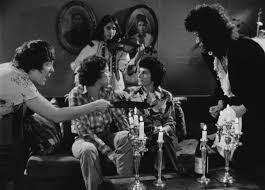 Yet Oxenberg introduces something else that seems absolutely out of place in what was to have been a normal evening to determine whether or not they might be compatible. A server pours out endless drinks of champagne, another pushing the couch pillows closer together. A gypsy violinist pops out of nowhere to serenade them. And a bevy of dancing women jump into action like a musical chorus-line in order to lure them into a nearby hot spa. These romantic enticements have clearly no place in this otherwise ordinary evening between two attractive lesbians.

It is as if, instead, the tokens of heterosexual movie romance has wandered into their conversations about their preferences for isolation. As much as they attempt to ignore them, they find their friendly discussions enforcing something upon them for which they had no need or desire. Once more, it is as if the normative pretenses of romantic love have been imposed upon them simply because others in their heterosexual audience have presumed they needed help.

In almost all of these wonderful satiric situations, lesbians are represented as outsiders who those within the society insist must be made over if they are to succeed in their affairs. In the most outrageously naughty of her lesbian stereotypes, Oxenberg explores an issue that might just as be easily made fun of in the male gay or even bisexual community: child molestation. Since many conservative straight people have long imagined that lesbians have a secret desire to sexually abuse and convert children to their way of life, the director pushes that ridiculous assumption into absurdity, as the lesbian of this “unnatural” act has a entire wardrobe in her closet devoted to various ruses and disguises to engage in such behavior. The morning we’re invited into her closet she chooses, after great deliberation, the outfit of a Girl Scout leader complete with several boxes of cookies to draw the children to her.

Off she marches to engage two young girls sitting together at a nearby playground. She invites the girls over to shower them with cookies, but a large tightly gridded fence stands between her and them, and most of the cookies break into pieces the moment they hit the fence. She pretends to talk to them, but little gets through the wall created for just such purposes, to keep unwanted visitors out.

Indeed, even in this exercise in perversion, the lesbian is locked out as an outsider from any possible attempts of communication. The girls observe her from the protected world they inhabit with some amusement, eventually becoming bored with her gestures. They stand, kiss one another and turn away to the playground. In short, these two innocents protected within the world they inhabit, are permitted a kind of love from which any would-be lesbian intruder is intentionally locked out.

In a terribly homophobic review of this film in The Village Voice, James Wolcott wrote: "'Child Molester' concerns a lech who dolls herself up in a Girl Scout outfit and haunts playgrounds, lusting after little girls. When she tries to entice a pair of tots with GS cookies, the girls gigglingly kiss each other and scamper off — they don't need the Scout Leader, see, because they're already budding lezzies.”

Obviously, he utterly missed the meaning of Oxenberg’s jest. In the first place, lesbians and gays are not out to corrupt innocent children. But what this skit does reveal is that all LGBTQ people, just by their outsider status, are kept away from even sharing or communicating with children. Even seeing these innocent girls, black and white, as being lesbians because they kiss demonstrates the bigotry that keeps same-sex people ostracized from the so-called normative world. Has the very act of two children kissing become evidence of some prurient desire? If so, I think the director has made her point. Any aspect of same-sex love is perceived automatically as an issue of perversity and deviation, leading to the idea that all LGBTQ people need to be kept away if not locked up.

In her final piece, “Stompin’ Dyke,” Oxenberg features a rather normal looking woman, actually rather petite, but who, arriving upon a motorcycle dressed all in leather and looking mean and tough, automatically terrorizes the entire community, from home boys, Hare Krishna dancers, to passing visitors, and sand-locked sunbathers, all of whom move away from her and one another simply to let her pass. She walks toward the ocean, for a moment the camera losing sight of her as she moves down to the shoreline. She does not even pause at water’s edge, but moves forward, the seas themselves parting for her as if she were Charlton Heston playing Moses in The Ten Commandments. 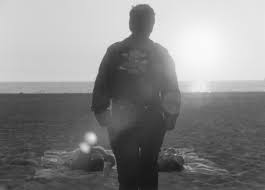 Oxenberg takes this stereotype into new territory as we witness, for the first time in her presentation of “unnatural acts” a woman who is all powerful. Yet, we also recognize, as the figure moves un-accosted through this space, she is still very much an outsider to whom no one apparently wants to even get close. We can see in the “Stompin’ Dyke’s” eyes a feeling of justifiable well-being, but also sense at moments an enormous depth of loneliness.

This is a brave work, not afraid to explore half-truths in order to reveal their absurdity, a film that demonstrates the observations of those who differentiate themselves from the lesbian community as generally exaggerated and false.

Posted by greenintegerblog at 4:25 PM