a love the lover cannot explain

French director Jean Grémillon is perceived in his home country as one of the most respected of the pre-New Wave directors alongside with greats such as Jean Renoir, Marcel Carné, and Jacques Becker. His important films during the war years such as Remorques (1941), Lumière d'été (1943), and Le ciel est à vous (1944)—brooding yet spiritually luminous works—were highly popular with the film-going audiences of their day, following in the success of his earlier works Gueule d’Amour (1937) and L'Étrange Monsieur Victor (1938). His three great works of the war years has recently been collected in a Criterion Eclipse disk, receiving significant attention when released. Yet today Grémillon still remains unknown to US audiences, particularly when compared to Renoir and Carné.

Renoir’s esteemed position given the extraordinarily high quality of his oeuvre speaks for itself. And Carné’s works remain international favorites, mine as well. Yet, particularly when viewed in the context of the latter, Grémillon’s movies can now be seen to be in touch with contemporary filmmaking, and at times in the impulsive actions of their characters and the radical camera shifts in which, at moments, the narrative is played out in images of light and dark or simply revealed sans actors have far more in common with films of the New Wave and in their sometimes obsessional and tortuous relationships between male and female, spiced with wit, almost remind one at times of Jean-Luc Godard’s Pierrot le Fou or François Truffaut Jules et Jim.

The ironies of those New Wave films, if nothing else, are played out quite beautifully in Grémillon’s Gueule d’Amour, best translated as Lady Killer—where the dew-eyed soft-spoken Jean Gabin as Lucien Bourrache, a popular star in his day who could match Jean-Paul Belmondo in sex appeal in the 1960s—plays a dashing soldier of the Don Juan mold, said like Casanova to have a lady waiting for him in every city and village.

We certainly witness that in the city of Orange when the military force marches through the streets, the women racing to their windows and balconies simply to catch a glimpse of the “lady killer” who all hope to catch his eye. He can hardly visit a café or restaurant without every woman ogling him.

The “Gueule d'Amour” is even reprimanded, with secret admiration, by his superiors who have received complaints from males who have temporarily lost their lovers and wives as he sweeps through their towns. Yet, our hero denies that he has any interest in the woman whatsoever.   As he tells his innocent friend René (René Lefèvre)—who a little like a young puppy throughout the film gently touches, almost in fond admiration, the older and experienced man—he is more interested in the camaraderie of soldier than the women he encounters along his way.

We might almost believe that, but he too is enchanted with his own reputation, keeping a photo of himself in full regalia in his barracks. Moreover, although he is soon to leave his service, he finds numerous ways to sneak off on tours to nearby cities wherein he continues to embellish his reputation as a woman slayer.

Having received a small inheritance of 10,000 francs from his aunt, he is permitted to travel overnight to speak to a lawyer in Cannes, but once there finds himself, soon after, trying to write a telegram to his commander to explain that he has missed his train—and probably will continue miss his trains throughout the day. 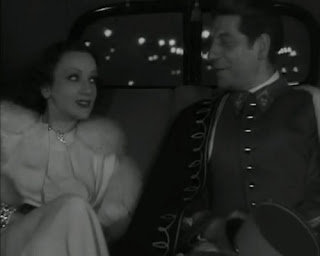 It is at the telegram office that he encounters the beautiful, disdainful, and rather mysterious Madeleine (Mireille Balin) who, somewhat like Proust’s small lemon and orange-flavored cake, sends him reeling through his memories of past and present loves; if he has been unfilled previously in his affairs with women, he is completely obsessed with Madeleine.

She has come to the telegraph office to request more money, having lost everything she had gambling at the casino, and as he attempts to wine and dine her in the adjoining hotel, she—oblivious to or haughtily dismissive of the stares of the dining room’s females—cautiously accepts his offer of his new-found money to take another chance at roulette.

She loses once again. Distressed, she asks that they leave for a leisurely walk before taking a taxi to her home where, without even so much as a goodnight kiss, she locks him out.

So begins a painful series of events which result in Lucien, now discharged from the military, following her to Paris. Finding work as a printer, he runs into her again at the opera and follows her to her villa, attempting to reconnect.

This time she is somewhat more receptive, and they find moments to share sex, while Madeleine still keeps him at a distance, planning dinners which she suddenly cancels, and making plans for the cinema or simply a walk to which she fails to show up.

What quickly becomes clear is that she is a kept woman, whose butler and mother help her to keep Lucien at bay. A bit like Bates, Edward Everett Horton’s fastidiously correct butler in the Fred Astaire musical Top Hat of just two years before Gueule d'Amour, a good deal of the picture’s humor derives from le valet de chambre’s (Jean Aymé, best known for his role in Louis Feuillade’s 1915 Les Vampires), aloof put-downs of the would-be lover as he attempts to keep him as far away as possible from entering Madeleine’s domain uninvited.

When finally Lucien, against all decorum, barges in, he is met with Madeleine’s mother, who while comically chowing down an entire gourmet meal cooked up just for her by the valet, makes it quite clear to Gabin’s character that, while her daughter’s wealthy benefactor may permit some sexual dalliances, they can be only occasional and temporary; Madeleine by no means can go with him on vacation in the country as he desires. Lucien retreats, now realizing the full truth of Madeleine’s sexual commitments.

Still obsessed with her, however, he is determined, after what he has imagined to be a shared love, to get an answer from her directly. This time the mother calls the patron, who soon after appears to claim his financial prize. Standing on either side of the fat financier, Madeleine and her mother make it clear that Lucien, no longer the handsome “lady killer” of his military days, has no real role to play in their lives.

Quitting his job and Paris, the former soldier returns to Orange where he opens up a small country bar, without making an attempt to contact his former friend, René, who has since leaving the military become a respected doctor in the city.

Through a visit to a former restaurant he and Lucien once frequented, René discovers that his friend has returned, joyfully meeting up with him and describing that he now has himself discovered love in the form of an impulsive woman who has changed his entire life. He invites his dearest friend to meet his fiancée, Madeleine, the very next evening. 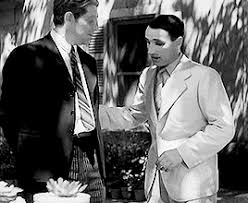 Yes, Lucien suddenly perceives, it is his former Madeleine with whom René has fallen in love. He arrives at René’s home early, before Madeleine. The scene that follows is almost an inverted idyll played out with the two males, as René takes the now decimated “lady killer” around the small villa he has been reconstructing, describing to his friend the different flowers and gardens he has planted, his dreams for new additions to the house, and his future dreams. He has indeed created the perfect world in which to live with someone he deeply loves. Alas, we know what these two heterosexual males cannot: that together they would both come to life and love in such an ideal space. René, as Lucien had so often before, receives a telegram saying that his lover cannot join him.

When Lucien arrives home to his bar, Madeleine is waiting there, the camera capturing her silhouette, while her now aged and ailing former lover is represented only through his shadow. When the two meet, it is as if they have performed the scene over and over before and know the lines well before they say them, she insisting that she has come to Orange only because of her love for him and that she wants to resume their relationship; he reprimanding her for having so taken advantage of the childlike believer René. 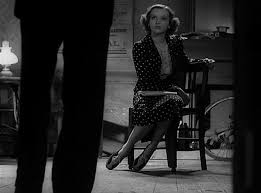 Insisting he is simply jealous of her meaningless attentions to René, she phones René telling him that he has never meant anything to her and that their relationship has come to an end.

So too, however, has Lucien’s love for her; but his statement of that fact only results in her further taunts, suggesting that she will use René as a pawn to get her long-ago lover back, torturing the innocent man in the process with her pretended love.

The Don Juan now becomes the murderer he was always meant to be, exorcising her not for himself so much as to protect his friend—a man with whom he cannot even explain to himself that he loves in a way he could never have this plotting femme fatale.

Showing up at René’s door Lucien has no rational explanation of what has just happened, putting himself entirely in his friend’s hands—which only reminds us how earlier in this film René had so innocently yet lovingly stroked Lucien’s knee and face. 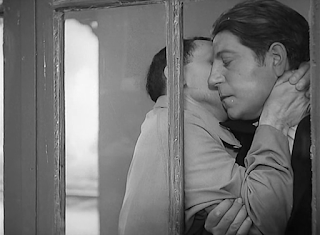 His friend, it appears, now perfectly understands what truly has happened, buying Lucien a ticket for Marseille and from there an escape to Africa where he will be safe. At the train station—while Lucien Bourrache (which means “borage,” the blue herbaceous plant which symbolizes power and courage) stares forward awaiting a destiny he cannot comprehend and perhaps having lost any memories through Madeleine’s murder he may have had of the past—René kisses Lucien gently on the cheek, not in the way another Frenchman might greet another friend or to say goodbye, but with a shy intensity we comprehend means something far deeper.

As the train moves away with Lucien on it, René, like the hundreds of lovers saying goodbye, runs after it until it has sped away from his fruitless attempt to call his lover back.

Posted by greenintegerblog at 3:19 PM