Jenni Olson’s poetic reflection on love past begins with a simple act of stroking her friend’s tattoo on her left arm. Without a visual analogue the action might be that of anyone, a man making his first move on a woman, a man attempting to engage another man, or, as we know in this instance, a woman having fallen in love with another woman.

The voice we hear is suddenly interrupted by an intertitle, presumably describing, rather humorously, the actions that have led to the moments about to be described: “Fuck, talk, sleep, fuck, breakfast,” the kind of events which are usually are at the heart of normative narrative films which are generally less interested in the time after the events that lead up to and include the sexual act. 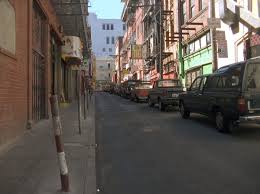 But then Olson’s films—this her first full 16mm short in color, Blue Diary—are always “different,” queer in a way that underlies the director’s lesbian sexuality from new and different perspectives. The visual content of her films, for example, are simple shots of mostly empty San Francisco streets revealing everything from industrial sites to rows and rows of city bungalows, along with dead-ends, large open boulevards, gasoline stations, neon-lit parking garages, a view of the ocean, etc.—an entire world of various possibilities which— in the ruminative voice-over performed by Lynn Flipper, read actually, Olson later admitted in an interview, by filmmaker and director Silas Howard who at time was transitioning, if his voice is any clue, from woman to man—are apparently now closed off due to the woman at the center of the film as she pulls away the morning after the sexual act.

And in that sense, one might describe Olson’s short work a study in contradictions:

I think I’m too tired and then I’m not. So much for my good boundaries and emotional health. She’s straight. But so cute. I think we’re on a date. It suddenly becomes clear that we’re not and last night was just a fluke. I become lost in her train of thought. I become tender about the way she talks. The way she laughs and the way she seems so far away from me. She doesn’t ask me questions beyond certain conventional enquiries. And then she’s not particularly intent upon listening to my answers. She tells me now she’s actually celibate. Ignoring this obvious rejection of  my advances, I maintain some hope, and buzzed on raging hormones I make more meaningful eye contact. Slowly approaching her for a kiss, I wish she would open her mouth. She gives me only a soft kiss, which I return in a gesture of earnest desire. With my heart pounding, smiling sadly at her disinterest, I lower my eyes in defeat and feel the heroic acceptance of this new fact of life. She is not interested in me.

This passage, which represents the majority of the film’s “essay,” (as Olson often describes the aural center of her works) is entirely based on oppositions: being tired and then not, having boundaries but breaking them, imagining one is on a date but realizing that the sex was just a fluke, being tender about someone who is actually far away. The loved one asks conventional questions but seems disinterested in the answers, while the teller of this tale, feeling rejected, advances nonetheless. Even disinterest seems to result in excitement, defeat becomes a kind of heroic act. 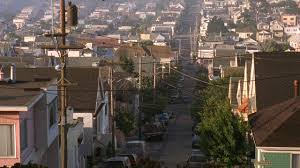 Similarly, the “wallpaper,” as Olson describes the visual scene, in this case shot by noted filmmaker William E. Jones, primarily represents cityscapes lit by the hazy blue light that in California generally defines sunrise just before the golden light breaks through. The streets are mostly empty, the stores and businesses not yet fully opened, a kind of “stop” (just like the stop-signs we witness) before the actions of the day take over.

In short, love in this “blue diary” is transformed almost moment by moment into a kind of longing for what the speaker has momentarily enjoyed at the very instant  it is disappearing, the way morning steals away the joys of night in bed dreaming of those multiple possibilities. A full 17 years before the director’s “defense of nostalgia” in her feature film, The Royal Road, there is already in this work an intense remembrance of the pleasures that in that very moment are also being taken away, forever lost. And, yes, there is something heroic in the knowing abandonment of something which you had that was never yours in the first place.

In a sense, Olson’s haunted lover represents a kind of tougher urban version of the role at the center of Richard Strauss’ Rosenkavalier, The Marschallin, who warns her young lover, Octavian (performed always as a “trouser” role, i.e. a woman singing the part of a male) that the passion they now feel will soon be over due to realities of daily life; the best that one can hope is to have the grace and wit to accept without rancor what the new day brings.

Near the ending of her Blue Diary, Olson sits in the dark, swallowing the oppositions she has just faced now signified in her very choice of food: bland, slightly sour tasting Swiss cheese combined with the fruity bright flavor of strawberries, while nursing “that melancholic ache I have felt from childhood, always having crushes on girls and not being able to do anything about it.”

Posted by greenintegerblog at 11:01 AM