Ned Martel (screenplay, based on the play by Mart Crowley), Joe Mantello (director) The Boys in the Band / 2020

The above review of William Friedkin’s original film version of The Boys in the Band ends with my suggesting that I might not yet again re-visit this play adaptation into a film. But at the time I had not contemplated that I would be working on an omnibus 2-volume study of Queer Cinema, nor that I would never be quite able to sever my complex ties with the play and now two films that have been so important for the representation of gay life in the USA. Finally, the death of its playwright Mart Crowley this terrible year of 2020, more than a half-century later, saddens and startles me both.
This is a work I have love and hated throughout most of my life, and without my truly realizing it, along with the Stonewall riots of 1969 probably did more to alter the way my husband Howard and I came to see ourselves in the very first year of our relationship. When the play originally appeared it was, sad to say, one of the first honest portrayals of how gays spent some of their evenings in New York and other major US urban centers. And yet that very expression of a hidden reality almost immediately led to an end of that lifestyle pattern. As Crowley portrayed it, the weekly (sometimes nightly) gatherings of an outrageous simulacrum of a family that could succor gay men who were daily forced to portray themselves to others and, perhaps, even to themselves, as normative heterosexuals, offered them a time and way to express their true fears and emotions through an elaborate exaggeration of what that daily world imagined queerness to represent. As any comedian knows, laughing at oneself is also a mode of protection, just as the camp absurdity of using female names and gestures to describe sometimes highly masculine men might almost be seen as a privately hostile comeback to the daily asides they had to endure about women and queers that came out the mouths of American man-boys who still often spoke as if they were locked away in a high school locker room.
Yet as I wrote in the review above, “ Of course, just attending such an evening clearly meant you were, in fact, queer, and gathering with the others you were re-announcing that. The patois spoken by these groups was evidence, itself, of being in the know, sharing in a kind of private language which the society as a whole would find difficult to comprehend. And if, in their put-downs, it might superficially sound as if the entire gathering hated each other, it was really a reassertion of love, the way a stereotypical Jewish family might endlessly kvetch to one another for their behaviors. Love and family were at the heart of such events. In fact, only someone like Woody Allen can match Crowley’s loving cruelty of one’s own kind.” 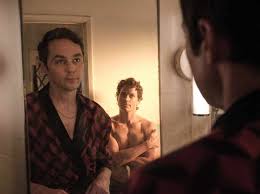 Moreover, as Crowley’s play made clear for anyone with a shred of humor and an open mind, those evenings also represented a great deal of fun. Again, from the review above: “They dance, they sing, they bitch, they kiss and make-up, and, ultimately, they leap into one another’s arms in tears of pain. Yet together they get through each night.” And I should have added, behind their insistent need to out-do one another in their humorous barbs, they surely laughed a lot under their breaths. Just getting through the night was a bit like performing in a stage play until everyone was so utterly exhausted they knew it was time for bed.
For the first third of this new version of Crowley’s play, which does basically remain true to his script in terms of the words that appear on the page, the excellent actors under Joe Mantello’s direction—Jim Parsons as Michael; Zachery Quinto as Harold, Matt Bomer as Donald, Andrew Rannells as Larry, Robin de Jesús as Emory, Tuc Watkins as Hank, Michael Benjamin Washington as Bernard, and Brian Hutchinson as Alan—all repeating their roles from the award-winning 2018 revival and all of them, unlike the original 1968 players, openly gay, nicely brought that bitter comic spirit alive. 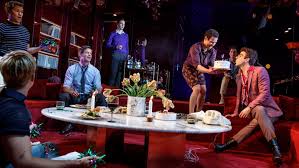 After a few uncomfortable moments of wondering whether Jim Parsons (who I haven’t liked in a couple of his many roles) would perform the role as well as Kenneth Nelson did in Friedkin’s movie, I sat back and enjoyed the by now familiar action, as one-by-one the various celebrants arrive bearing gifts and twisted versions of bon mots. The work came winding its somewhat creaky but often hilarious way forward until the arrival of the unexpected guest, Michael’s old college friend, the fiercely heterosexual Alan, whose obvious discomfort upon espying a party of only males—a feeling he holds within but is so obvious that he might as well have a cartoon balloon containing his thoughts hovering over his head—that Emory cannot resist pulling out his proverbial knitting needle sharpened years of girlish giggles to stick it in. His masculinity suddenly thoroughly threatened, Alan cannot contain himself, like the locker-room jock he has always been, from slugging it out. 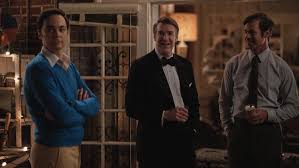 As Michael swirls him out of the party into his upstairs bedroom, Alan further attempts to explain his actions by expressing just how much he detests effeminate men, reminding him of pansies. Each time he speaks a sentence the camera pans to Michael, whose palpable reaction to the hateful words are expressed, quite brilliantly, mostly in his eyes and neck, the former of which represent his ability to see the horrible truth and the latter which possibly might feel its repercussions, a bit like a rabbit suddenly being lifted up by its ruff into a hunter’s hand.
Yet, unlike the earlier film, in which Michael seems a bit tougher-minded and able to stash away such stupidities into a closet of exhausted recognition, Parson’s Michael, already broadcasting the fact that we learn only later in the play, that he is equally uncomfortable with his sexual proclivities, seems ready to pull out the nearest knife.
This might only be described as great theater, but the director’s and screen-writer’s vision  also represents a radical shift in the telling of Crowley’s story. Suddenly, like a vacuum any humor that the story held is sucked away. Crowley, in a special feature accompanying the film speaking with the players just weeks before he died, keeps reminding us that while his original held a great deal of humor, it also contains a far more serious message.
And we suddenly recognize that this company and Mantello, all of whom came of age long after the kind of gay gatherings this play represents, taking Crowley’s words to heart have determined to contextualize this work within an historical period when gays, hostilely treated by the society in which they lived, also held within a great deal of self-hatred and, accordingly, anger against their own kind. If those same issues, in fact, are openly expressed in Crowley’s original, here they suddenly become grand themes played out the moment that Michael, faced with a figure who reminds him of his former denial of his sexuality, suddenly abandons his temporary sobriety, drinking gin and anything else he might guzzle down throughout the rest of the evening. 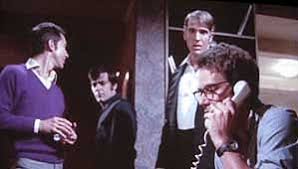 What was previously bitchy love becomes now outright punishment and even torture, as if Albee’s anger expressed in Who’s Afraid of Virginia Woolf? has blown into the room that, in Crowley’s tale, has just been thought to have been locked with the sudden rainstorm. One by one, Michael, through his open accusations and distorted version of the old party favorite the Telephone Game, turns innocent childhood and teenage infatuations of love into a harrowing of the past that permits no winners except Alan, whose telephone call to his wife leads oddly to a renewal of their relationship.
Albee surely would have made something else of this game, which reminds me of “Get the Guests” in Who’s Afraid, which Crowley’s more predictable language and his far more superficial characters simply cannot convey.
By focusing only on the scathing statements of hatred instead presenting them in the context of bitchy insights, the cinematic creators present their viewers with characters who have grown so distasteful that we can only wonder why they might possibly ever want to meet one another again. Only those who refuse to play along, the birthday boy Harold and Michael’s ex-lover Donald, who, knowing Michael better than the others, sit and watch the proceedings like ghoulish voyeurs, are spared. Both suggest that they will see Michael again soon. 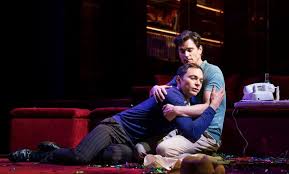 We are certain that Alan will never again communicate with the host, and we can imagine that having fallen in love again with one another through that horrific game, Hank and Larry may no longer need to attend such absurd conventions. If Bernard and Emory—the two who represent outsiders not only for their sexual desires but for the color of their skin—decide to return to that hell, it will most certainly be with a new sense of respect for one another’s identity. Michael, filled with guilt, slinks off to a nearby mass to pray for forgiveness; but this time, we are afraid, he might wake up with something more than the “icks.”
In short, by attempting to deconstruct the original work, the writer, director, and cast have torn the play and players apart line by limb. The final scenes which present jazz-infused stills of the play’s characters now coldly pondering outside on the Manhattan streets what they have just suffered in the hot-house drama during the previous hours (the movie runs 122 minutes) further dissociate the film from the 1950s and 60s gay world by framing the survivors as  something close to the suffering heterosexuals locked out of romantic sex in the serious-minded soap operas whipped up by Robert Anderson in Tea and Sympathy and William Inge (who was gay) in The Light at the Top of the Stars (1957). I’m sorry to have to remind Mantello and Mantel that Crowley’s odd play, even if it opened up a world which it simultaneously shuttered, was never a work awaiting the deep analysis of clever folklorists.