Joel Ashton McCarthy | Why Does God Hate Me?

a lie to ease our conscience

If Patterson’s film, reviewed above, uses one of the numerous times in history in which members of the LGBTQ community suffered bigotry and hate by governmental civil authorities which  reiterate his rather obvious conclusions, Joel Ashton McCarthy’s commentary on religious fundamentalists’ determined efforts to destroy sexual diversity reads almost like a propagandistic text written by gays for youths suffering those prejudices in their homes and churches. Even the movie’s title, Why Does God Hate Me? appears to be a loaded question which allows any liberal-minded human being to subscribe to the film’s easy answer, which we know even before the movie presents its first image: God doesn’t hate anyone, only bigoted people hate in the name of God.

Particularly given that the mean-spirited parents whom we hardly get an opportunity to meet in this work are made to represent the worst of hateful stereotypes, being folk who block all stations not broadcasting religious sermons, chastise their elder son for arriving home a few minutes late, and lash their youngest boy, Matthew (Dakota Daulby), for even asking why gays are the subject of his family’s vitriol, we wonder if there is any flesh and blood behind their views.  As Matthew says in the voiceover in which he expresses his struggles with his mother’s and father’s values: “I didn’t know how strict my parents were until they kicked my brother out,” evidently because of their discovery in his room of small quantity of marijuana. 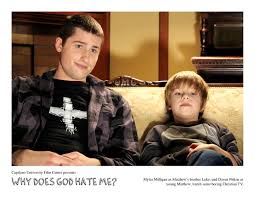 These are the kind of parents who enjoy taking their son on an outing to express their hate for women who have chosen abortion, any faggot still standing, and anyone else might even avert their gaze in a direction other than the ones upon which they and their fellow church members are focused. There is simply no room in their cross-eyed view of the universe for deviation.

Such people, of course, do indeed exist. But it’s too bad that we might not have been presented with bigots with a little more meat on their bones and less grey matter in their heads. Many children suffer enormously because of parents who share such beliefs, but in order to understand the complexities and difficulties of such family imprisonments, it might have served the director better to allow these monsters to have some carnal appetites instead of presenting them as simple-minded as the badges of hate they pin upon their chests and the posters of damnation they wave through thin air.

Their son Matthew, having grown up believe such rot, seems amazingly nonplussed to discover his own gay feelings and is so unbelievably well-adjusted that he is even able to suffer the abuses of his girlfriend Esther, who kicks him in the balls every time his eyes scan the handsome school jocks parading down the hall, purposely shares her cold with him so that he might get out of sharing a few weeks in an all-male summer camp, drops a cinder block on his leg so that he is refused by the wrestling coach, and prays over him like she were a vulture impatient for a taste of carrion. 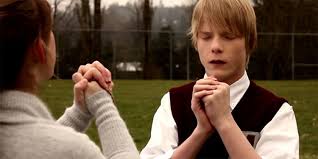 On their first missionary outing to San Francisco, he holds back from joining the others ready to scream out their hate to anyone with a set of ears. And on his second such voyage to San Francisco with his parents to protest the gay pride parade, he momentarily skips over to the other side, amazed by a gentle gay man who speaks kindly and honestly to him and even attempts to call him back after spotting the WE HATE FAGGOTS badge Matthew has been forced to wear.

Returning back to his home in Redding, Matthew calls up his brother living in that evil den of iniquity, San Francisco, and arranges for his own escape from his pompous jail keepers. When Esther, inexplicably asked to come see him off, reminds him that he hasn’t yet been cured, the now savvy Matthew suggests that perhaps he is not the one who needs “curing.” and blithely skips with his suitcase out of the house, repeating his brother’s facile adage, “Sometimes you just have to fuck the rules.” 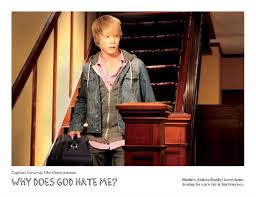 Unfortunately, this is not the way young gays and even heterosexuals escape their parental jailhouse of the mind and spirit. Many young gays and lesbians forced to survive on the streets and engage in prostitution just to survive may still feel quite strongly that God does indeed hate them for simply being who they are.

As nicely as everything seems to come together for the young hero of this fairy tale, in the real world the bigotry of belief has deep sinkers on the souls of such innocents, and the pain they suffer for their so-called sins is real and enduring. A slug in the balls or any other part of the body, a brick tossed in anger, and a contagion of any disease such as COVID-16 more often kills than serving as a reminder of what such youths have abandoned. McCarthy’s film is a lie to ease our consciences.

Posted by greenintegerblog at 4:15 PM