In Kenneth Macpherson’s 1930 film feature, his only full-length cinematic work, Pete Marond (Paul Robeson) arrives in a small provincial Swiss village, much like Territet where the director, his wife Annie Winifred Ellerman (better known as Bryher), and her and his female lover Hilda Doolittle (the poet H. D.) along with H D.’s young daughter Perdita* had taken up residence and established a new film and publishing venture, The Pool Group, supported primarily by Bryher who was the daughter of a wealthy British shipper.

In the film, a similar ménage à trois had already had already been played out between the character Thorne (the grandson of President Chester A. Arthur, Gavin Arthur who, like Macpherson, was bisexual, later becoming increasingly gay-oriented),** his lover Astrid (H. D.), and Pete’s wife Adah (played by Robeson’s real wife, Eslanda), who had been having an affair with Thorne. 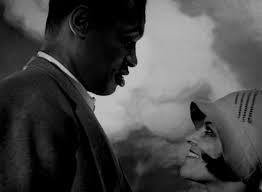 Add to the film’s remarkable story-line concerning what was still illegal under the miscegenation laws  active in 1930 throughout most of the US, the plot’s introduction of a Weimar-like bar-hotel run by Bryher (simply called the Manageress) and her lesbian barmaid (Charlotte Arthur, then married to Gavin), that featured a gay piano player (novelist, poet, and film critic—he contributed extensively to Macpherson’s film magazine Close Up—and editor of Life and Letters, Robert Herring) and one recognizes this long-obscure feature as having all the earmarks of a succès de scandale. 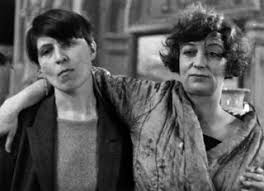 Yet, the critics of the day, and many I am sure of today, knew little of the casts’ histories, literary or sexual, while being utterly puzzled by the director’s use of the expressionist tropes of German filmmaker W. G. Pabst—which Macpherson employed in his long histrionic-like gestures of psychological angst through Thorne and Astrid—or the radical cuts and montage influenced by Russian director Sergei Eisenstein, that he employed throughout the work. Surely they could comprehend even less about the various racially and sexually-charged reactions of his characters to one another. In fact, for many years the film was thought to be lost, and when copies were finally discovered, because of their rarity, few film scholars were able to see them. Only recently has the film become a work standardly taught in film courses. 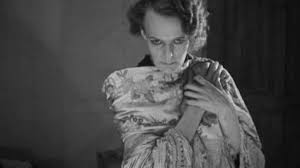 I am sure for many viewers even today that if the lesbian relationship of the manger and barmaid is apparent, that others miss the pianist’s sexual admiration of the black Adonis Pete who Astrid has summoned to this isolated hotel in order to restore relations between Pete and his wife in order to free herself of the jealousy she suffered over Thorne and Adah’s affair. The pianist, apparently, has not only already struck up a friendship with Pete but features a photo of the man taped to his instrument (all puns intended).

Moreover, today’s viewers will find the locals’ racial hostility, particularly that expressed by the town busybody named The Old Lady (Blanche Lewin), intolerable. Even the obviously welcoming hoteliers are caught up in the white gaze of the black man, consisting simultaneously of desire, awe, fear, and disgust.

British critic Ellie Jones, writing of the film in 2016, best captures one of the film’s most captivating scenes when, realizing that Adah has left him, Thorne picks up a knife and, uninvited, rushes to Pete’s hotel room with perhaps revenge on his mind. Jones writes:

As the film reaches its climax, we see Pete and Adah together in Pete’s bedroom above Bryher’s café. Thorne, jaded by Adah’s rejection, storms through the café and charges upstairs. Sensing trouble, Bryher and the pianist follow him, quick to protect Pete and Adah from the intruder. The resulting stand-off is truly sensational: it marks an exhilarating moment in cinematic history. As Thorne bursts in on Pete and Adah, he is unwittingly caught in a constellation of multidirectional gazes. Stood separately within the confines of the bedroom, Pete, Adah, Bryher and the queer pianist jointly stare at him. For about forty seconds, a straight white male is subject to the devastating looks and smirks of queer and non-white men and women. Beads of sweat gather on his brow and slip down his face, melting away the stability of his own identity.

"In this brief interim, Pete and Adah are not strangers in the village. Neither is Bryher, queen of her own queer counterpublic in which the potentiality of a cross-cultural, alternative community is hinted at and made credible. In the café, Thorne is the stranger. Undone by the simultaneous disdain and desire for the black body, whiteness—the most elusive of social categories—is suddenly stripped bare. Instead of being the default position, white masculinity is uncovered as a specific and neurotic mode of being, paranoid to the point of pathological."

We can only recognize in this intense moment of a black man caught up in the white gaze that Pete must recognize it is the result of a myriad of differences in perception. For the pianist it is primarily what I already suggested, a sexual fixation for the man he can possess only in a photograph; for the manager and barmaid Pete represents their attempt to create an alternative community to the normative white world that surrounds them and threatens their own identities as well; for Thorne it is more complex, involving issues of rage, patriarchal control of the female and, yes, clearly the sexual desire that he cannot admit even to himself let alone to others. If his rage demands action, his sexual desires push him into passivity, and the tension of the advancing and retreating motions themselves are the cause of his stasis in space and the perspiration that pours from his every cell. Robeson’s character, perceiving the push and pull of those who face him can only laugh at the ridiculousness of it all. 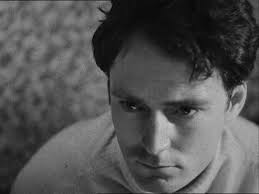 Twice the manager attempts to pull Thorne out of the room, only to have him return. Only when she pushes him down the stairs does in awaken from the fever that has overtaken his body, forcing him to literally cool off, in the following scene, in nature.

He returns to his home and Astrid an utterly broken man whom she now further taunts for his lack of masculinity, taking up the knife he might have used on Pete to threaten him by slashing at his arms and face. She certainly knows that by doing so she is endangering her own life; after all she has just finished reading the cards which foretell her own death. But in her anger that he still mourns his loss of Adah, she cannot resist. To protect any of the male macho he has left, Thorne can only destroy her, obviously regretting it the moment he has committed the act. 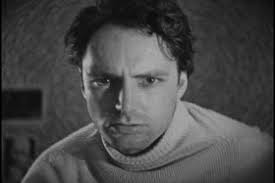 A bit like a mad Lady MacBeth he spends an inordinate amount of time ordering and cleaning up any sign of the assault before he goes to the police to report the violent result of his act.

After a trial, Thorne is acquitted, while the innocent Pete is told by the mayor that he must now leave the town, adding to his sorrow for the fact that his wife has already left. As the stranger in a world in which he can only be seen as an outsider, a dangerous thing in a society, like the Swiss in general, who value racial and genealogical histories that tie the individual to the communal whole. As James Baldwin, who in 1953 found himself in just such a Swiss provincial community, wrote in his essay “Stranger in the Village,” after recognizing that no matter how long he might remain there he would always be an outsider: ‘”They move with an authority which I shall never have; and they regard me, quite rightly, not only as a stranger in their village but as a suspect latecomer, bearing no credentials, to everything they have—however unconsciously—inherited.”

The hotel manager, attempting to comfort Pete, expresses something like that sentiment in her simple statement and admission that they have both lost their battles to alter the status quo:  ‘What makes it worse is they think they’re doing the right thing. We’re like that,” shifting from the other (“they”) to the self (“we”) in recognition that she can no longer dare to separate herself from those who create borders to the alternative world of inclusion she and her friends have attempted to construct. As Jones interprets the closing scenes: “The films ends, the café closes and with it our hopes of a queer utopia.”

The lines of the borders separating human beings have been reconstructed as Pete awaits the train that will take him away to other societies equally segregated into absurd divisions of “them” and “us.”

*Strange to say, I once slept in Perdita’s narrow bed. Barbara Guest often stayed in Perdita’s New York Chelsea apartment when Perdita was traveling. And twice on my visits to Manhattan, I stayed in that apartment, once with Barbara and once alone.

**Later in his life Arthur was intimately involved with British poet and gay rights advocate Edward Carpenter and with Neal Cassady, the model for the character of Dean Moriarty in Jack Kerouac’s On the Road. Arthur was also close friends to Allen Ginsberg and Alan Watts, and was himself involved with early gay right liberation activities.

Posted by greenintegerblog at 4:06 PM