the happy couple
by Douglas Messerli

I’m going to begin this review by admitting something I’ve never put to print: I have never actually liked the Laurel & Hardy short films until I begin more carefully looking back at them for My Queer Cinema, during which I gained a new admiration for the comic wit, particularly that of Stan Laurel.
Indeed, I’d argue That's My Wife, directed by Lloyd French, is one of their very best, a sentiment I was happy to discover has long been shared by several critics and audiences. I rarely laugh out loud when streaming movies, but this time I couldn’t resist.
This 19-minute short wastes no time in getting down to business, with Oliver Hardy’s wife, Magnolia, marching down the household staircase with packed bags, declaring—as she also did in Their First Mistake of 1932—that either Stan goes or she does. But in that later film, she was simply fed up with Oliver spending most every night with his friend, while this time, as the intertitle quotes her: “He dropped in to stay five minutes—He’s been her for 2 years.” “He’s untidy,” she continues; “He eats grapes in bed,” an observation that almost suggests that he is a Bacchus or Dionysian-like figure, the god of wine, music, and ecstatic dance, connections that will be returned to even beyond his previous bedtime grape-eating habits soon after.
If in Their First Mistake Stan and Oliver attempted to woo her back with the acquisition of a baby, this time it is clear that she has gone for good, and with it the possibility of Oliver inheriting money from his Uncle Bernal. To demonstrate her disregard for Oliver, the uncle whom she has never met, and Stan, as she sweeps out the door she dashes a doorway plant and its pot to the floor, returning momentarily to do the same to its twin.
So desolate is Oliver that he two thrusts another piece of pottery to the floor and so sympathetic is Stan that he does the same, upon which Oliver and his friend parrot Magnolia, with Stan declaring that either Oliver leave, or he will. Since, obviously, Oliver has no intention of leaving his own house, Stan marches off upstairs to pack.
The ridiculousness of the entire series of acts is only magnified by the sudden appearance of Uncle Bernal at the door, visiting in order to meet his niece. Before he allows him entry, Oliver quickly tries to sweep up the pottery shards and, sitting on the couch with Bernal, is about to tell his uncle that Magnolia is temporarily not at home until the sounds of Stan’s attacks on his bureau drawers is heard in the living room in which they sit. There is no way out of the comedic situation we recognize has not been set up: Oliver will have to bring Stan downstairs to portray his missing wife—particularly if he hopes to inherit his uncle’s estate.
After a few moments of utter refusal, Stan—always the stooge for Oliver’s ridiculous propositions—dresses up in a flapper-like dress, using a barbell for his breasts and a doll’s hair for his wig.
She’ll be down in a moment, declares Oliver, admitting that she is not a good-looker but is a great clown filled with fun. 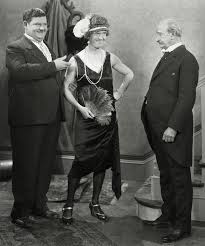 Indeed, the word fun seems to be the film’s running gag, as Stan trips in his heels, rolling down the stairs to meet Bernal. If Bernal is a bit off-put by “her” sudden and awkward entry, he chalks it up simply to her high spirits, inviting his nephew and niece out to dine and dance at the Pink Pup (another clue that this film is quite aware of its homosexual possibilities).
The Pink Pup seems to be filled with half each of high society snobs and roués, the latter of which might define our heroes. Even have they been shown to their tables Stan again trips taking down Oli before he himself is pulled over Hardy’s hulk in what appears almost to be a male-female wrestling match, about which the uncle highly shows his utter disapproval, presuming that this is yet another example of his niece’s “clowning around.” 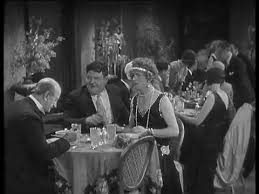 Even when the three are finally seated, an elderly man at a nearby table, getting a glimpse of Stan scratching his itchy hosiery, becomes highly attracted to Oli’s new wife and begins lobbing sugar cubes her way which, despite her attempts to ignore him, intrudes upon their family gathering by appearing at the table himself, propositioning Stan with the old conversation starter: “Didn’t we meet at the Fountain Hotel in Miami?”
Eventually, when the stranger tries to barge his way into sharing dinner with him, Bernal scolds his nephew, demanding he do something forceful about the flirtatious intruder, at which point Oli stands up and pours a bowl of soup over the drunk’s head, the man finally rising from his seat and ordering another cup of soup “to go.”
In the original scenario, Bernal himself, spotting a beautiful woman nearby, begins to flirt with her, not realizing that she happens to be Magnolia, Oli’s now estranged wife. The device would have later provided a nice tool of blackmail when, finally fed up with Stan and Oli’s public displays of bodily affection, he chooses to disinherit his nephew. Fortunately, however, the writer and director (Leo McCarey and French) chose a quirkier route.
In the revised version, even after they rid themselves of the would-be home wrecker, a shady waiter who has just stolen a jewel-laden locket from the neck of one of the Pink Pup guests, determines to stow his loot within the bodice of  the new Mrs. Hardy’s dress. 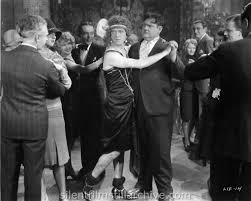 The sensitive-skinned Stan whispers his problem to Oli, as the two quickly rise up to dance with the others, hoping to shake the irritant from Madame Hardy’s gown. Their terpsichorean pleasures are quite charmingly funny, but when even that fails to free whatever has gotten into Stan’s gown, Oli attempts to pull it free—first in a telephone booth where a would-be caller observes what appear to be their sexual gyrations, then behind a screen which the waiters pull away to reveal their bodily gymnastics to the entire room of diners, and finally behind a curtain which opens to present the nightly sex show, featuring by accident the seemingly impatient couple.
As they attempt, with flushed faces, to tromp back to their table, Stan again trips, bringing Oli and falling over him once more as if it were simply impossible to separate their apparently intertwined bodies. 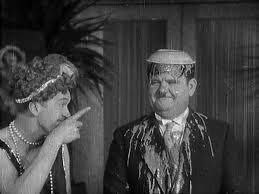 It is at this point that Bernal determines to leave, taking his money with him while the man over whose head Oli has previously emptied a bowl of soup appears from out of nowhere to dump the contents of his order “to go” over Hardy’s pate.
It may be a fine mess into which they have once again gotten, but as they hold hands and turn to one another as if almost taking a bow, we recognize that they are pleased at least to still have one another, and that Laurel and Hardy have now in cinema history been, for better or worse, forever wed.

Posted by greenintegerblog at 1:55 PM