a change of the reel

Obviously influenced by William E. Jones’ now-classic underground 2008 film, Tearoom, which used almost an hour of raw film data from a police sting of a men’s room in Massillon, Ohio, Patterson’s Caught does the same for what are supposedly tearoom scenes in Jonesville, Ohio where in 1964 a bathroom camera hidden behind a mirror filmed over 68 men having different forms of homosexual activity, leading eventually to 38 convictions.

Unlike Jones, however, who is fascinated with how the sexual acts themselves reveal the sociological and sexual interplay of men seeking physical love that they knowingly recognize as outlawed, Patterson, in his faux documentary, is far more interested in the psychological condition of a heterosexual man (Gabriel Gatton, to whose character I shall attribute his name) who, despite an apparently loving wife and a young male blonde-haired child, Georgie, visits the bathroom during this short film three times in order to find sexual fulfillment.

The first two times quickly reveal the unpleasant frustrations and dangers of such desires. The first time Gabriel enters he immediately is faced with two rather heavy-set men in the toilet stall, one sucking the other off.  Our “hero” moves to the urinal where he pretends to piss, one of the men from the stall leaning back to get a view of the younger man’s face, whereupon Gabriel decides to opt out of that day’s sexual adventure, moving instead to wash his hands below the mirror behind which the camera is hidden.

The very next image is of his curly-haired son with his wife (Liz Wicker) smoking a cigarette on the couch. Despite her greeting of “Hi, honey” and a kiss on his cheek, her husband kisses only the air, quite obviously dissatisfied with her standardized greeting.

The second time at the bathroom, dressed far more casually, Gabriel encounters a handsome young man (Cole Simon) at the next urinal, who when he turns to face him gradually moves his lips into a knowing smile before flushing the urinal and going over to the mirror, where we see the camera whirring behind it, to comb his hair. Soon, he returns to Gabriel, putting his hand upon the other’s shoulder and messaging it momentarily. A very unattractive intruder immediately enters while Gabriel quickly scuffles off, obviously displeased with the interruption as he walks quickly back to his Chevrolet.

During the next brief interlude at home, his wife, smoking yet another cigarette, stands over the stove scrambling his eggs. Georgie sits in his highchair, she bending to retrieve after she puts on her gloves, apparently spiriting him away with her to church, while our friend posts himself behind the local newspaper.

After Gabriel’s first spoonful of eggs, Patterson’s camera immediately cuts to Gabriel sitting in his car yet again outside the public bathroom, swallowing down a final sip of beer as if to get up enough nerve to enter once more. 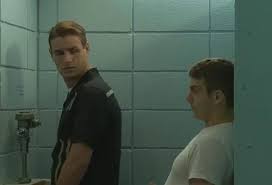 At the same urinal he again encounters Cole, who this time stands behind him, thrusting his lower body slightly forward as if to suggest he might be interested in anal sex. This time we see the camera and the cameraman behind the mirror, catching the kabuki-like scene their victims are playing out.  Cole moves off to the open stall, pulling down his pants and facing out. Eventually Gabriel follows, as the hidden camera evidently stalls as, we later discover, the cameraman engaged in changing reels. Accordingly, we see nothing depicting their sexual act, but know that this time Gabriel has succeeded when he we observe him leaving the building with a slight smile on his face. 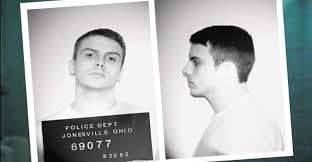 The next cut shows Gabriel, dressed only in his undershorts, opening his door to collect the daily newspaper where he discovers through a headline that police have arrested 17 men at the men’s room for “deviant behavior.” Each of the men arrested (Cole among them, having been caught on camera with other sexual partners), if convicted, is sent to the state penitentiary for one year.

In a highly ironic shift, our ears are suddenly bombarded by the Bobby Vinton standard, “My Heart Belongs to Only You.”

My heart belongs to only you

I've never loved as I love you

You've set a flame within me burning

A flame to stay within me yearning

It's just for you I want to live

It's just to you my heart I give

I'll always be your slave my darling

Through the coming years

Gabriel suddenly moves to his wife, kisses her full on the lips and takes her upstairs to the bedroom, evidently to celebrate his escape from justice through sex. It’s not to be, however, as he  quickly pulls away, driving off. In the film’s last scene, we see him sitting again in the parking lot in the front of the bathroom, obviously contemplating. 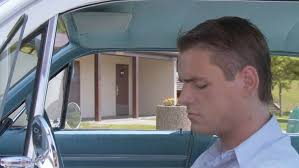 Need anything more be said? He has been temporarily “saved,” but it is clear that he longs for another homosexual encounter which he may or may not chance.

Obviously, this is a kind of tragedy, not because of his queer desires, but because of the restrictions put upon those desires by the so-called normative society in which he lives. If he chooses not to chance it again, he will have to accept a life of lies and dissatisfaction that will offer him little else in the future but work, death, and the possible dissolving of his marriage and the effects of that upon his little Georgie. Perhaps what he has now assimilated is that although he has not been arrested, he too has been “caught” and imprisoned for life.