Ron Peck and Paul Hallum (screenplay, based on an idea by Peck), Ron Peck (director) Nighthawks / 1978

In my review of the 1978 film above, You Are Not Alone, I characterize Ron Peck’s Nighthawks as making a trawl through the bar scene in London seem like Waiting for Godot. And although I will confide to the reader that the review below will express a positive summary of the film, it is, for long scenes a depressing and, at moments, even despairing work—particularly if you were upon its release a young gay man wondering whether your sexual inclinations might lead to you to an openly expressive new world. In fact, in its utter honesty about the gay sex scene of the late 1970s I can say I might have argued that young boys who had not yet set foot in a London gay club and pub should not be allowed to see this work, a least without an experienced gay man accompanying them explain other alternatives.

It’s also interesting that two British reviewers, Matt Lucas, writing in The Guardian, and Ryan Gilbey, writing in The New Statesman, almost echoed one another in their early assessments of the film and young men and their changed perspectives when they watched it again years later.

Lucas writes: The first time I saw Nighthawks, I was mortified. Ron Peck and Paul Hallam's landmark portrait of the London gay scene was made in 1978 but I watched it in 1993, in Bristol, as a 19-year-old student who wasn't yet out to his family and who never went to clubs. Back then, the world it depicted looked so depressing, so defeated.

In 2001, I revisited it out of curiosity and had the opposite response: the film felt unflinching but refreshing.”

Gilbey observes: “To my 14-year-old eyes, it was unremittingly bleak and miserable. I had recently heard for the first time Tom Robinson singing ‘Glad to be Gay’ (the ferocious version he performs solo in The Secret Policeman’s Ball) but there was nothing very glad about Jim’s demeanour.

That’s the way I saw it anyway. Dingy rooms, pale bodies, downcast faces, a carousel of misery. The Conservative government, worried around this time about the promotion of homosexuality, implemented Clause 28. At 14, I felt like a compulsory screening of Nighthawks would have been a more effective deterrent.

I see it differently now. Sure, Jim is hardly the life and soul. And the gay scene looks pretty dour. But the director Ron Peck and his co-writer Paul Hallam are making some stylistic points about patterns of behaviour: their film is big on repetition. Every club plays the same pulsing electronic motif (we even hear it at Jim’s work party). Shots are repeated throughout the film, particularly driving shots, with the camera stationed on the back seat as Jim drops another one night stand off at the Tube the next morning. With this emphasis on repetition, the movie is urging Jim to make a decisive move to break the cycle that is imprisoning and inhibiting him.”

The Jim ( Ken Robertson) of whom Gilbey writes in a gay geography teacher, who seeks out the landscape of London housing projects during the day snapping pictures for his students, while at night scouring the dancefloors and back rooms of gay bars such as The Steps (named in the movie), keeping his two lives mostly separate from each other.

Unlike the bar I used to regularly visit in New York City, where nearly everyone was young and beautiful, this bar is filled with 30-40-year-old’s whose looks have begun to fade, with only a few younger and much sought-after boys in sight. Jim is not bad-looking, just a bit plain, and is often able to find some younger and handsome fellow to take to bed. 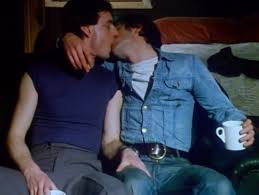 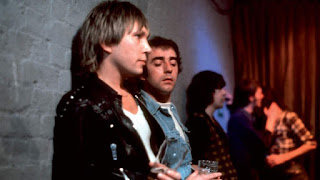 With some of these such as Mike (Tony Westrope), Neil (Stuart Turton), and Tim (a figure we don’t encounter in the film) he manages to maintain short-term relationships. But in most cases, as he openly describes his life to his new English-teacher friend, Judy (Rachel Nicholas James) his temporary lovers either begin staying out on their own many nights or gradually refuse to call him back. In yet other instances, Jim himself grows bored with his new partners and their interruptions into his otherwise orderly life.

Many a night we observe Jim and others lined up against a wall to check out the newcomers or those who might be also seeking for someone to go home with for the night. At other moments Peck and his cinematographer, Joanna Davis, pull the camera so closely into dancing faces that we can see the boredom and even pain in their eyes. Scoring, never an easy process, is particularly difficult in The Steps. At one point, we even see a lonely Derek Jarman among the endlessly waiting men.

The New York Times critic Janet Maslin, while describing Robertson’s character as “intriguing and well-played,” summarized the film overall as being “overlong and aimless.” But that is precisely the point: Jim’s sexual searches are precisely that, long and often without any meaning; in this case what the director is trying to tell us needs to be played out in images through time; it cannot be properly summarized in a few sentences or snippets of celluloid.

Jim, however, seldom complains. It is simply the life he has chosen, which gives him more joy than the student-teacher dances which his teaching colleagues argue that he should attend. The one moment the easy-going Jim actually loses his temper, in fact, is after the English teacher Judy, despite his protestations, has dragged him to the school event, resulting in a boredom even more unbearable that waiting for a hook-up in the bar while leading his students to believe that he and Judy are perhaps a romantic couple.

This film and its central character are, in nothing else, absolutely honest—something all to rare in LGBTQ films. Early on in his friendship with Judy, he asks her about her husband before she refocuses the conversation on him, inquiring about his relationship. At the moment Jim has been seeing a young man for several nights each week and begins to describe that interaction using the male pronoun straightforwardly as he proceeds. 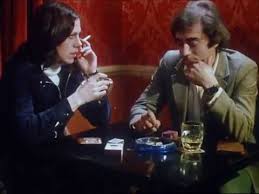 In an absolutely brilliant moment of acting and filmmaking the camera focuses on Judy, as she blinks her eyes, swallows several times more than it takes to bring her beer into her gullet, and moves her tongue over her upper lip, all the time attempting to pretend to both her friend and herself that what Jim has just revealed is absolutely ordinary. There is perhaps even a moment of a personal sense of dashed hopes that flickers across her face, having just revealed that she has had to fight for this night out with Jim, it being her husband’s weekly evening to spend with his male friends, free from their seemingly claustrophobic relationship. 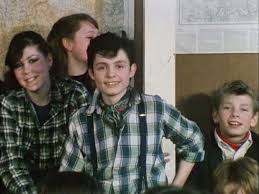 Similarly, when Jim’s full classroom of students suddenly blurt out the question foremost on their minds: “Are you bent? Are you queer?” Jim takes a deep breath and answers, “Yes,” patiently ready to answer their often-hostile questions, “Do you dress up as a woman? Do you carry a handbag?” and the most frightening of all “How do we know you don’t like young lads like us?” The geography lesson suddenly moves from one in space to a survey of his own body, his habits, his mind. As he argues to the headmaster soon after, “What else could I do? This may be the only time, outside of sex education classes, when they might hear honest answers to their questions which might even prevent them, a few years later, of bashing gay men.

Particularly in this scene, but also in its very premise, Peck’s film can only remind one of Frank Ripploh’s film Taxi to the Toilets of only 4 years later. Both films feature elementary school teachers who find it difficult to get “tied down,” and must face their students with the truth of their sexuality in the classroom. Unlike Frank, whose sexual activities are performed mostly in public bathrooms, and who is into leather and drag, Jim’s bar-hoping night life is rather tame. Instead of automatically being fired after confiding with his students, as Frank is, Jim is simply warned that he mustn’t let such a thing happen again, while the faculty members who know of his sexuality all declare they will support him, just as the students did for one another in You’re Not Alone.

But the real question remains by film’s end. Will Jim, like Frank, be left alone to have to face as Frank is beginning to, the specter of AIDS? Peck couldn’t have completely foreseen that issue, but he did posit it strongly through the English teacher’s questions, who despite the restrictions put upon her by her own marriage cannot understand how one could fulfilled in life with no one to face the next morning.

This film, in fact, might have been retitled, after Cole Porter’s classic song, “Night and Day,” worlds which Jim has severed in order to survive more “comfortably,” by he means to be without effort, without having to deal with the difficulties of another and coming to recognize his own failures. The song, of course, pleads for a unification through love of the two halves of life:

Under the hide of me

There's oh such a hungry yearning burning inside of me

And this torment won't be through

Till you let me spend my life making love to you

Although he is totally honest about his sexuality, Jim is, strictly speaking, still in the closet, hiding out, as most of the others he meets at The Steps, in a small warren of rooms not unlike a real closet, instead of strolling through the larger spaces of love available to him. 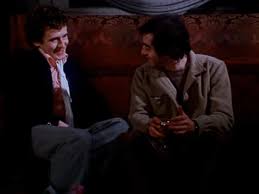 In the very last scenes, he meets up with an old friend who invites him to a sprawling artist’s loft for a small rather hushed party of mixed couples. Although the friend has, since knowing Jim, found a wealthy lover who apparently is a gallerist, it is clear also that that relationship is coming to and end and that he might be seeking out a new companion in Jim. When he invites Jim to go home with him our hero seems pleased, ready to fall back into his normal pattern of a few nights in bed with another man. But when his friend suggests instead that they go out to a bar together, Jim clearly is disappointed, unable to actually share in an activity other than the simple nocturnal meeting and daybreak leaving pattern he has long established. The very thought of actually sharing a experience outside of the bed with another man has evidently never crossed his mind.

We’re never privy to the choice Jim will make about his future. But if nothing else, this film forces him and its audience to face the alternative of another way of being for gays.

About a decade before this film, I too was Jim, with no plans to steer a different course—until I met the man with whom I’ve now spent night and day with for almost 51 years, perhaps saving me from death through AIDS.

Posted by greenintegerblog at 10:59 AM