telling a story you don’t want to tell

What does a director do when he has committed to film a work about the notorious scandal of the 1920s, when two rich young gay Chicago men, Nathan Freudenthal Leopold Jr. and Richard Albert Loeb, picked out a little known cousin of Loeb’s, a boy of age 14 to murder, simply in order to experience the thrill of killing someone and getting away with it as they had their other crimes of breaking and entering and committing arson upon a storefront business? 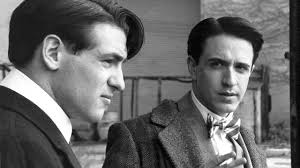 No one with any shred of conscience might want to turn these two narcissistic admirers of Friedrich Nietzsche's concept of supermen (Übermenschen) who they perceived themselves to be—and to prove it kidnapped and bludgeoned the boy to death in the back seat of a car with a chisel before depositing the body in a lake and pouring hydrochloric acid upon it in the hopes its facial and other features might be burned away—as heroes or even unknowing dupes of a viscous society.

In Rope Alfred Hitchcock isolated the two men and their hideous acts by locking them away for the entire duration of his film in the claustrophobic confines of their apartment to separate the men and their horrible contagion from infecting the rest of us. The victim, in this version, is an adult who is made to appear socially and romantically unfit to marry his fiancée  Janet Walker (Joan Chandler). To express Leopold and Loeb’s perversity, Hitchock does not focus on their homosexuality—although he certainly doesn’t hide it, continually referring to their shared bed—but whips up instead a black funeral, to which family members, the fiancée, and their University of Chicago professor are invited without them knowing they are not only sitting near but actually dining upon their loved one’s buried (stuffed into a large chest) corpse. By the time Hitchcock’s camera is finished dollying in and out of these rooms during the real time event, the audience is so dizzied that they stumble out of the theater as if they have just been set free from the prison to which the two murderers would be confined for most of the rest of their lives. Even the stuttering James Stewart, as the professor who once, in philosophical speculation, jested about guilt and innocence, doesn’t quite get off free from having partaken in their insane “joke,” Hitchcock’s quiet suggestion that perhaps society itself was unknowingly party to their horrible acts.

Richard Fleischer, basing his film on the Meyer Levin work Compulsion, focuses his version of the crime on the psychological instability of the two murderers, on their relationship to parents and siblings, and their distorted views of the world outside of their intellectually aloof and financially privileged visions of others. Except for an occasional conspiratorial whisper among the two men and the intensity of their conversations with one another the ordinary normative-minded viewer might never even suspect that these two ever spent anytime in bed. Most of the film, in fact, turns the crime into a whodunit, in which the police, Perry Mason-style, outwit the criminals. Only at the end of the film, when Orson Welles as Clarence Darrow spouts a 15-minute summary in which he argues that they are guilty by insanity and sociopathic immaturity (another way of suggesting in the first half of this century that the two might have been sexually involved) do we get any clue of their convoluted love. Fleischer keeps the actual crime and their bedroom sex out of eyesight as surely as the real judge in the 1924 trial banned women from attending the court when Leopold’s psychologist testified about their sexual intimacies. Fleischer faces the unpleasant task of telling us of Leopold and Loeb’s unspeakable actions by heavily censoring them. If Darrow saves them from the gallows it is basically because they were highly intelligent, sick boys who, as A. E. Housman characterized the world after World War I, which had no future: “O never fear, lads, naught's to dread, / Look not left nor right / In all the endless road you tread / There's nothing but the night.” In other words, Levin and Fleischer tell the story by mostly not telling it at all. 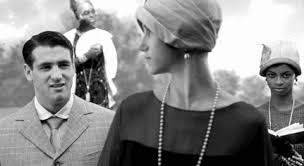 You have to credit Tom Kalin’s 1992 reading of the Leopold-Loeb affair as giving it “the full monty” if nothing else. Beginning with Richard Loeb (Daniel Schlachet) along with transvestite and transsexual figures such as Noshom Wooden, Trash, and Trasharama reading from Sacher-Masoch's paean to S&M, Venus in Furs that reminds us of the 1980s ads for Calvin Klein’s perfume and cologne “Obssession” (spoofed, appropriately, on Saturday Night Live as “Compulsion”), Kalin and his collaborating writer Hilton Als lay the whole affair right on the laps of contemporary culture.

Unlike Fleischer or even Hitchcock, Kalin focuses his attention almost immediately on Leopold and Leob’s sexuality, not only showing them kissing, fucking (an act which the court psychologist later describes as Loeb giving permission for Leopold to lay his penis between his legs), and exchanging rings. This good-looking couple are not only fully out of the closet gay boys, who consort openly with transsexuals, but are born of wealthy families who are Jewish—all three representing various kinds of criminal behavior in a society tumbling toward the great Depression. 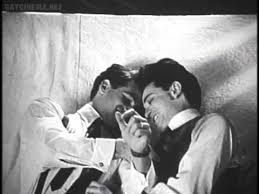 Instead of hiding those acts, as Fleischer does, however, this director presents them in all too gritty detail, showing how the two lured Bobby into their rented car, and how Loeb took great pleasure in beating the 14-year-old with the chisel he brought along just for that act. Blood squirts out of the gagged boy's head, dripping over the murderer's hands as Leopold (Craig Chester) drives ahead in semi-horror, yet all too ready to help drop the boy with his lover into the pond and pour out the entire bottle of acid over him.

They are also detestably smug, aloof intellectuals who not only see themselves as untouchable for the crimes they plan and later commit, but, being deeply into S&M, are fascinated by the mechanics of punishment and torture as played out not only upon others but often upon themselves. In Kalin’s no-holds barred presentation of them, he immediately shows us why no one ever might want to devote the time he will in this movie to represent their deplorable history and acts.

By this time Kalin has made it quite clear that as weak and subservient to Loeb as Leopold  was, that he—so similar to the relationship between Perry Smith and “Dick” Hickok in Richard Brooks’ In Cold Blood which made it clear that Smith had committed the murders just because of his hidden homosexual attraction to Hickok—would do almost anything that Loeb demanded of him, even if without his lover’s insistence he would never have.

Kalin and Als, in short, do not spare either man because of their love for one another, their cultural isolation, or their own self-hatred for their Jewish births. These were monsters, not unlike Bonnie and Clyde, and others of the day who committed unforgivable acts sometimes just for the evil thrill of it.

Yet this film takes us, during its second half, to a different level by making us aware that if Leopold and Loeb were monsters, so too might that word be applied to much of the populace in which they lived which continues in various guises still today. The followers of the mid-1920s trial were not only shocked by the fact that these two men randomly murdered a young boy, but because of their social status, ethnicity and, particularly, their sexuality.

As I mentioned above, women were banned from the court hearings as if they were too fragile to hear the psychologist’s bowdlerized recounting of the murderer’s sexual acts. As Kalin surrealistically shows us by bringing the bed with the two laying naked upon it directly into the courtroom, it was as if their being queer was equal—and surely more interesting for the mobs of the day—to murder. Indeed, murder was readily invoked by numerous members of normative society as the way to solve the problem of having such people in the society at large. Not only should they be tarred and feathered, many argued, but shot or hung. Like today, gun-toting vigilantes were at the ready to make sure justice was served through their deaths. Accordingly, for the man-in-the-street, murder was not even Leopold and Loeb’s major crime as much as was their sexuality, their intellectual superiority, and their race.

After his arrest, Leopold, insisting that he knew what he doing and was ready to face the consequences, even played to the camera as a snobbish, slightly peeved homosexual in the manner of the later film villain Addison DeWitt in All About Eve.

Apparently, Loeb died in prison by having his neck slit by another prisoner with whom, ironically, he refused to have sexual intercourse. In uncontrollable mourning Leopold was brutally bound in a straitjacket for several months.

Even worse, if far more banal, when Leopold was finally freed from prison after becoming a model prisoner, he moved to Puerto Rico, married a woman, attempted to join a born-again Christian group, and despite his parole restrictions, regularly drank and carried firearms, leading apparently the totally normal life he had previously scorned. At least he left his eyes to the University of Puerto Rico, but I wouldn’t want to be the blind person who inherited those eyes that had witnessed what was still called “the crime of the century,” which included not just the murder of a young innocent, but the stupor-like swoon ever into which much of the society fell.