how to kiss a gay man

If you believe that all Italian-Americans, particularly Sicilians, are part of Mafia families, are seeking only for a good female fuck, are innately homophobic, and are as dumb as pizza dough before it hits the oven; if your idea of gays is that they describe all of those who are not part of the LGBTQ community as breeders and describe Italian-Americans as “Guidos,” that they are constantly falling in and out of love with their accidental roommates, and absolutely adore watching Julie Andrews in The Sound of Music; and if you believe that forceful and willful women hate all males, straight and gay, for treating them as objects, but go wild when a sexy man finds his way into their beds, then you’ll love the 1997 Tony Vitale movie Kiss Me, Guido, which deals out stereotypes with the speed of a professional Poker dealer dispersing the cards of a double deck. “I’m out,” was my reaction from the first few moments of this sit-com-like work. 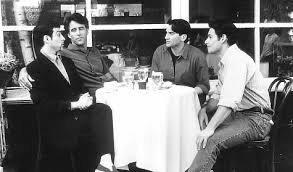 Vitale doesn’t start out to be mean to any of the groups he believes he is simply satirizing, and to give the director-writer credit, the movie is often stocked with smart one-liners and as a whole is fast-paced in a Neil Simon kind of way. All of its characters, moreover, including the two Italian brothers, Pino (Anthony DeSando) and Frankie (Nick Scotti), Joey Chips (Frankie’s fellow worker in the Bronx pizza shop), Warren (Anthony Barrile) who is gay and works as an actor, and even their demanding landlord, Meryl (Molly Price) are rather likeable.

Even though Frankie discovers his fiancée Debbie (Jennifer Esposito) being fucked by his brother Pino—the event that sends him packing and ultimately moving into Warren’s downtown Manhattan apartment—the director casts his villains as Warren’s ex-lover Dakota (Christopher Lawford), a director who after having left Warren and his newly “discovered” a highly pretentious but deep-pocketed playwright (David Deblinger), allowing space, particularly for Scotti and Barrile to show their talents. 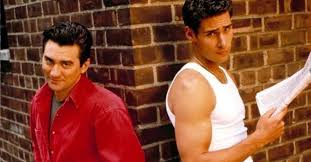 And despite Vitale’s superficial presentation of the Italian-Americans, the gay boys, and the would-be feminist representative, he does occasionally suggest more serious issues including the unaffordable prices of living in downtown Manhattan (even in the late 1990s), gay-bashing, the existence of Mafia members (in this case Vinny the Fish) who have affairs with gay boys (in this instance the playwright), and the possibility of an innocent Bronx pizza boy falling in love with as obvious transsexual (Wiggy).

In between these moments, however, is a heap of schlock writing that attempts to get the audience to laugh at Italians putting toilet paper on bathroom seats where any gay man might have shat, the endless backbitting of former lovers by gay men, and the adventures of the handsome but clueless Frankie who’s desperate to become an actor in the manner of Al Pacino and Robert De Niro but hasn’t the faintest notion of how anyone outside of his tightly-knit Bronx family might live and behave. Frankie, a good Catholic boy, has not even had sex with Debbie, saving her evidently for the honeymoon night. 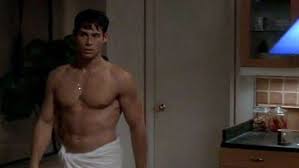 Despite his silly misadventures with downtown Manhattan lifestyles he finally does find a kind guide in Warren, hurt in the gay-bashing incident, who argues for Frankie to replace him on stage and with his friend Terry attempts to initiate his roommate-protégé into the various methods of how to act as a gay lover and even how to kiss another man. So convincing is Frankie’s performance that by film’s end the play’s audience and even his family in attendance are ready to forgive him for what now perceive as his sexual “difference” and to support his decision to become an actor. Like Rick and Louis at the ending of the film Casablanca, Warren and Frankie walk off imagining “I think this is the beginning of a beautiful friendship.”

It’s not much of an offer for anyone of the LGBTQ community who has had to suffer through this threadbare comedy, but at least a friendship might help them to understand one another far more successfully than the script has.