but he doesn’t know the territory

Spanish director Valentino R. Sandoli’s short film Paradigma of 2016 is about a young gay 17-year-old, Guille (Kuba Tarasiewicz) about whom the salesman early in the musical The Music Man might have chanted “But he doesn’t know the territory,” or, taking the clue from the work’s title, he can’t guess what is the paradigm of gay behavior—at least as some define it. 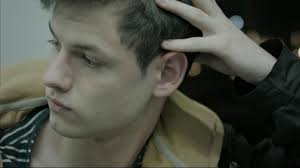 Having just recently come out, Guille is secretly in love with his best friend, but cannot properly express it to him and feels that his love might meet with total rejection. Accordingly, Guille seeks out sex with people on the internet, including an older man who dispassionately fucks him, but politely invites the boy to visit him again.

What Guille doesn’t realize is that it was simply a nicety, a way saying one time is enough and I don’t want see you again. Goaded on by his rather coarse girl-friend Julia (María Crespo)—the kind of open-minded woman friend that once might have described in the nasty good ole days as a fag-hag—he attends a party the man is hosting that they have tracked down on Facebook. 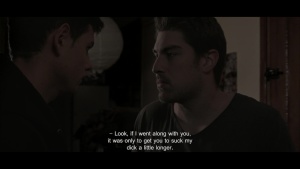 The would-be host is horrified by Guille’s and Julia’s sudden appearance and begs them to leave. “The only reason I went along with you was to you get to suck my dick a bit longer,” he straight-forwardly admits. Besides, he has a boyfriend.

Embarrassed, Guille is about to turn around and leave, but Julia has already discovered new friends at the party and is half drunk. The trio of her and her new women friends force the innocent to rapidly drink down a few shots, after which Guille, feeling the results immediately goes into the bathroom to wet his face in the hopes of sobering up. Another man, dressed in leather, unapologetically intrudes, reporting that he too was once a lover of the host. “How old are you, fifteen?” he mocks.

The leather dressed figure insists Guille share the drug he is using, and the young boy, without even wanting to is suddenly involved in a bacchanalian which ends with his new friend offering up his ass to be fucked. Almost too afraid to deny the pleasure, Guille has unprotected sex with the man. 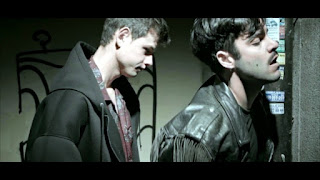 Finally, as he and Julia hit the library to study for an upcoming test he encounters another young man, just his age, whom he soon joins outside where they share a joint and look expectantly into one another’s eyes. 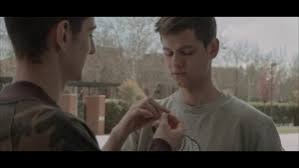 By film’s end we still don’t know precisely what the paradigm is or if this young man will fulfill his search for a suitable companion, but he has certainly come closer to the right “territory” if nothing else.

Sandoli’s film, while certainly not profound, does succinctly express, without the angst of David Moreton’s The Edge of Seventeen and without the purposeful search for sex in all the wrong places by the young hero of Eliza Hittman’s Beach Rats, the confusion anyone having just come out might encounter in trying to comprehend how to find someone with whom you might want to share a few evenings, let alone your life.

For young beginners like Guille—and I say this half seriously—there ought to be a paradigmatic guide to help the LGBTQ beginner know, for example, what one might or might not expect from a single encounter in a world that is so fluid; how does one determine truth or deception expressed by individuals who may have had years of experiences of which the young can never imagine. In such an uncharted territory, a freshman might not even know what sexual actions he or she prefers. If nothing else a neophyte exploring sexuality should be warned not to keep his foot in the door as someone tries to close it.