Yuan Yuan’s 2020 short film Heading South, which I watched today along with several other shorts chosen from among 3,000 entered in competition for the AFI Film Festival, might appear to some as conveying little more than an 8 year-old Mongolian girl’s overnight visit to her estranged father in China.

Indeed, the film begins with precisely that journey. But it is so much more complex when one considers its events in hindsight that one hardly can believe that such a complex work might be told in such a minimalist manner (with a running time of 13 minutes). The director speaks of her inspiration for this film as coming out of vague childhood memories that she could call up only with colors, shapes, and sounds, and it is through those sensory elements that this film is mostly conveyed. 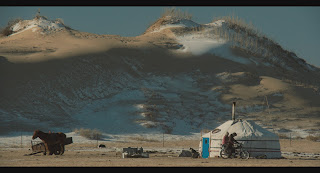 This movie features very few words, but when the central figure, Chasuna does speak she is required to say everything in both Mongolian and Mandarin, which might lead to confusion even for the most skillful adult linguist. While the film never focuses on the multi-cultural differences between the colder, more isolated world just to the north, and the Chinese city to which she travels, we are nonetheless totally made aware of them.

At home the child is free to ride her horse or simply run on foot across the semi-barren flatlands, once her mother calls her into the prefabricated hut in which they live, she is dressed, her hair brushed, and her body cleaned as she were about to enter an alien planet. 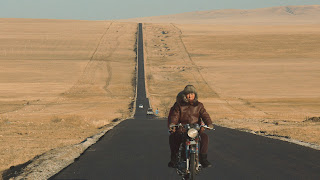 Her mother sets her astride her motorbike and the two go speeding off on a seemingly endless blacktop road to a mysterious elsewhere that apparently takes several hours given the fact that as they leave the sun is still high in the sky and by the time they arrive in the urban space where she will stay the night, it is already dark.

The girl is handed a package containing a leg of lamb, her mother reminding her to get the payment for it, before she sets her daughter down and speeds off into the dark.

Chasuna enters in medias res where a group of mostly older men are nearing the end of a  celebration with a younger woman. The men, we quickly comprehend, are all brothers of her father (Tongela) attending his birthday party  The girl is forced to sit on the knee of her father who asks her to recite their names and relationships in both languages of the people in attendance. She hesitantly does so, but is also somewhat abashed for their behaviors, most of them already having become drunk and insistent that the woman at the table quickly down several shots of liquor.

The woman returns to the table with a surprise birthday cake, the male participants laughing that only children’s birthdays are celebrated with cakes without even seeming to realize that the father’s child now sits in a chair beside him. One might imagine they might at least offer the girl the first slice. 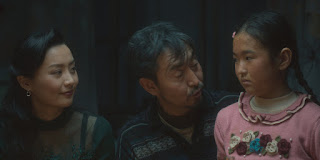 Instead the father, as if introducing his wife to Chasuna informs her that she must now call the stranger, “mother.” The girl refuses, and in one of the very few moments of the film says something so significant that she is scolded for it: “She is not my mother.”

Obviously, the father has divorced Chasuna’s mother and married a different woman (Fala Chen), but for the innocent child is almost as if she were hearing of these marital changes for the first time in her life.

Distressed by the demands of her elders and perhaps embarrassed for her own outspokenness, she leaves the table, watching their constantly running television set as if it were some sort new sort of torture device.

As her father chides her for her refusal, others suggest that it will take time. But we know that Chasuna has no time in this world, just as the people in that world lives of semi-permanence. Unlike her mother’s hut, a communal space which the entire family shares, this urban environment consists of small closed-off rooms which even the inhabitants do not share with one another. The stepmother, after trying to entire the girl into eating a piece of the cake which Chasuna seems to refuse, disappears, while the girl’s father lays down upon the couch to spend the night. The child is given a small space elsewhere where she spends what appears to be a rather sleepless night.

She awakens to the sound of the horn from her real mother’s motorbike and quietly dresses, preparing for the journey home. As she is about to leave, her father, still on the couch, calls her over, attempts to kiss her and, without her having to ask, takes out a small wad of money, peeling away some of the bills which he hands her, as if, instead of representing a joyful visitant, he were paying her for appearance at his festivities somewhat like she were a prostitute instead a child of his own flesh-and-blood. 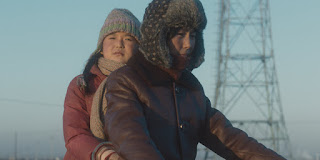 Reluctantly taking the money, Chasuna rushes out to meet her mother to return to her beloved home. In the last scene we watch her joyfully kissing and mounting her horse to ride again across the steppes.

Posted by greenintegerblog at 4:28 PM