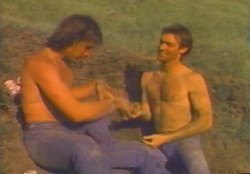 We never quite know for sure whether or not the drifter, Mike (Nicholas Rempel) working as a temporary hired hand for Dan the local farmer (Todd Fraser) have sexually consummated their obvious homoerotic attractions for one another. Indeed, the few paragraphs written about Clay Farmers all seem to suggest the two are just friends whose attraction for one another is still in the early stages. Yet these handsome boys joyfully touch, hug, and rough-play with one another in a manner that is far more explicitly sexual, and immensely more sensuous, than the two fun-loving cowboys romping in nature after their one-night romance represented in Ang Lee’s Brokeback. Just because we haven’t (and won’t be) invited into their “tent” does not mean that Mike and Dan aren’t on their way to becoming the homosexual couple that their neighbors, particularly the mean homophobic next door drunk Jim Antonelli (Asbury Ward), imagine them to be. I’d argue that if we don’t perceive them as a couple Gonzalez doesn’t even have a story to tell. For, it is ultimately Mike’s inability to commit to a longer relationship, once faced with the hostility of the isolated community in which he has found himself, that is central to his film.

Gonzalez, in fact, goes out of his way to show through his beautifully-shot images of their partial nudity as they work side-by-side planting and weeding the rows of crops, as well as in their gentle shaping of the clay-hewn arts works that Dan creates in his spare time that those two are natural pair. That clay work, representing images of dwarves, half animal and beast figures, and a large feminine figure with the head of a man clearly spells out the characters’ perception of themselves as bisexual beings at home in bodies and an imaginative space that does not tie them down to normative definitions of existence.

In many ways, however, this is not really the story of a budding romance between two hot farmers but a tale of the terrible abuse by Antonelli of his two boys and wife which the local community abet in their silence. Although Dan does not own the farm which he has contracted to manage, he too is a local, and he warns the newcomer Mike, who has clearly already gotten on the wrong side of Antonelli even before the film has begun, to stay away from their neighbor and to keep quiet about his behavioral abnormalities. 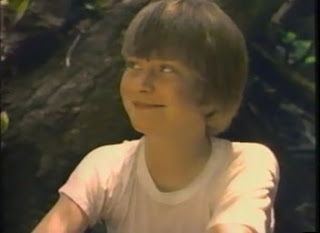 That is difficult since the youngest of the neighbor’s boys, Gary (Liam McGrath), despite his father’s admonitions, almost daily crosses over from the Antonelli farm boundary to hang out with the two younger farm workers, in part because they teasingly treat him like a pestering younger brother, and, as we later discern, because they offer a sense of belonging and protection that his own home life doesn’t offer. Mike even notices marks on the boy’s body clearly from abuse, and tells Gary that if his father even touches him again to come to them, a statement representing the very kind of offer which Dan has warned him previously can only lead to problems.

Indeed, the way writer Moore and director Gonzalez have structured this narrative, we know almost from the first frame of the work that there ultimately will be a showdown between the farm workers and their irritable neighbor. A trip to the local bar makes it clear that there are tensions between the town folk. Bar keeper Trapper (Diane Conway) keeps a rifle beyond the bar to take care of any fights that might break out.

Evidently, however, Dan and Mike have made at least temporary friends with the others who inhabit the bar by buying rounds of free drinks and offering up their friendly and upbeat personalities. But the first scene in this bar still remains tense when Antonelli enters to begin drinking in earnest alone at the bar, leering at the two friends throughout his obvious determination to become inebriated. Don moves to the jukebox to put on what is evidently his favorite song, Will William’s “What Love Can Do,” a gender free song that seems just as appropriate for gay men as the heterosexual country western audience for which it was probably written*:

You love me, I love you

What more is love to do?

Kiss me and hold me close

Let’s see what we can do.

So give your heart to me

I promise you I’ll be true

I’ll give my heart to you

Let’s see what love can do.

Gonzalez’s camera focuses, for the first time, on the Antonelli farm as Jim attempts to return home. His wife and the children’s stepmother, Terri (Dolores Dwyer), obviously herself a common victim of her husband’s abuse, has already locked the door, with Jim calling out for Randy (Aaron Denney), his eldest son, to open up. They too refuse, cautiously peering out a backroom window to observe his whereabouts.

The confrontation continues with Jim ultimately attempting to break his way into their small, prefabricated house. It appears that Randy undoes the lock, as both boys run to the barn to seek protection, Randy grabbing up a rifle. As Antonelli moves in to beat his wife, she hits him over the head with a bottle, knocking him out, while Gary runs to the farm workers place next door, calling out their names but unable to find them.

When Gary returns home, he finds his brother lying on the barn floor, dead. Either the boy, in loading the gun, has accidently killed himself or his father has killed—accidentally or out of fury— his son. The Antonelli parents choose to describe the event in a third way, that Gary accidentally killed his brother, despite Gary’s insistence he is innocent and that he found his brother already dead. 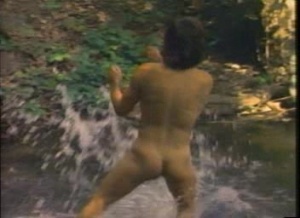 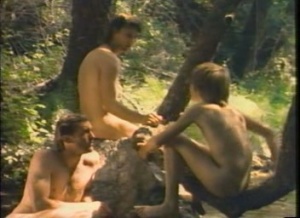 Perhaps the only major flaw in this movie’s logic is that the very next morning Gary escapes his family farm—despite his father’s quite emphatic warning that he must never again communicate with their neighbors—to hang out with his young working friends. At first, he says nothing about the recent incidents on his farm, but he gradually does reveal that his brother has died. To relieve the tensions they all feel about that news, Mike suggests that they take a break from chores and try out the local swimming hole, no swimsuits needed. As the gay boys joyfully slip out of their dirty clothing, Gary shyly and perhaps recalling his father’s warnings, hangs behind remaining in his underpants until the simple pleasure of the sun beating upon their naked bodies forces him to also strip, the three now swimming together in the only idyll this tough little movie allows. As they lay out in the sun to dry, Gary tearfully comes over to Mike to share the full story of how he is being accused of accidently killing his brother, again insisting upon his innocence. As Mike gently caresses the boy in consolation, Jim Antonelli, sneaking up upon their brief escape to nature, angrily demands the boy get dressed and return home with him.

Once more, the audience seems to be more savvy about what is in store with regard what superficially appears as a pedophilic encounter than are the characters. But then one commentator seems to argue that they are not even fully cognizant of their own sexual predilections.

Further, while Mike momentarily contemplates a confrontation with Antonelli, Don again admonishes him, insisting that what happens in their neighbor’s lives is not something in which they should interfere.

This time Mike attempts to explain just what Gary is experiencing. In a long and quite emotionally stirring scene which reveals that as a child he too had been the subject of abuse, he expounds that it is not simply a temporary moment of suffering for the boy but something which he will have to suffer for the rest of his life. Sitting near the ocean, Mike angrily faces off with his friend:

“You don’t really know what’s going on with Gary, do you? All you see is marks on his skin. His brother didn’t kill himself because of that. You don’t even think about the marks he’s got in the inside, do you?” When Dan argues “Of course I do,” Mike continues, “Naw, all you see is some dumb kid who wants to hang around and get in your god damn way. That’s not why he’s around. I mean do you know what it’s like to be hit every day and to have to make up stories about where those scars came from. You don’t get over it. You carry it with your goddamn life. ...He don’t even know what he’s being hit for.”

Returning to the bar the two now encounter a world that now stands against them, even Gary having been forced to admit to the community’s assertion that they forced him to join them. Mike is bloodied by Antonelli and others before the bartender ends the fight with a shotgun blast, the two young workers escaping back to their farm.

Earlier in the film, Mike has shared with Dan his desire to get away from the farm and to move on to Los Angeles. A spat between the two ensues, with Dan suggesting that we might want to move on with Mike as soon as he contract with the farm owner expires within a couple of months and Mike allowing that he would stay for while if that would happen. In short, they seemed to have made a kind of commitment a more permanent relationship than what Mike has seemingly been running away from for much of his life.

Now, however, despite Dan’s appeals, his friend is newly determined to get his final paycheck and speed back into the world in which he more acquainted. Dan pays him and gives him a homemade coffee cup he has fired in clay in one the film’s first scenes. The gift is clearly meaningful to Mike, but nonetheless he drives on, stopping only a short while just outside the graveyard where the Antonelli family is burying Gary’s brother. Before they might spot him, he pulls away, returning to the highway, pulling to the south. 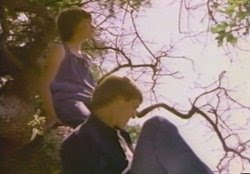 Dan, now alone, sits in the hollow of a tree branch playing his favorite song on his harmonica and is suddenly poked from behind by Gary, who joins him on another branch in the tree.

In the world in which he lives, Gary can only hope to be consoled by those who stay behind in an expression of permanence that demands a repression of sudden judgment and change, while Mike can only wish that through a swift reversal of that behavior his lover will impulsively act to join him. It is a standoff as intense as any in the old west.

*The musical score by Robert Stine is excellent throughout.

Posted by greenintegerblog at 12:22 PM