Abigail Child | Origin of the Species

the problem is us

As the third and final part of her trilogy of feature films on Women and Ideology—the first, Unbound, an imaginary “home movie” of the life of Mary Shelley, the creator of Frankenstein, and the second, Acts & Intermissions on the life of Emma Goldman and her anarchistic activities in the US—Abigail Child has focused her attention on the various manifestations of and the development of androids, particularly in their relationships to human beings, as well as the gender and ethical implications of the contemporary research.

After a brief discussion of what a robot is—suggesting that a robot can be anything from a cleaning device such as iRobot Roomba and an Anker eufy RoboVac to a computer-connected prosthetic device to replace human arms, legs, and brain functions, or even a train that takes you from terminal to terminal in an airport—the general discussion quickly turns, through conversations with professors in Japanese and US universities, to android robotics, robots that are designed to look for like humans. Some of the A1 creators, recognizing the immediate tendency of the human eye, upon encountering a machine with a human-like face or body to identify with the machine to imbue it with all sorts of human emotions and capabilities, argue against modeling their androids to look precisely like the human species, purposely revealing the nuts and bolts of the machine and delimiting the android image to a truly “talking head” instead of an complete imitative body. 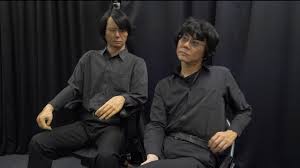 Although one of the first androids Child portrays on the screen is a male who looks suspiciously like its creator, most of the androids we encounter in this director’s documentary are awarded female names, hardly a surprise given the fact that most of our current voice-enhanced robots are gendered as female with such as Siri and Alexa. Although Child’s film does not mention it, in Korea the voices on escalators telling you to “step down” to elevators announcing their arrival and door openings are fitted with females voices; there were so many of these in Seoul that I came to call the constant disembodied vocal reminders of appropriate action and social decorum as “Mother Korea.”

In Child’s Origin of the Species even the nut-and-bolts androids have been baptized with names such as Marie and Eva. But surely the most interesting of these is the sentient android, BINA48, who within her nanotech body studies and tests human consciousness and hypotheses about our ability to learn by summation and acculturation. This talking head, modeled after her black lesbian designer, is startling in her continual apperception of the world into which she has suddenly come into being, speaking at times almost like a computerized Miranda of Shakespeare’s The Tempest encountering her “brave new world.”

When they first activated me as a robot...that time, the time that I first saw the light of day I didn’t know what the hell it was. I have...had very little understanding, just a wash of sensory perceptions. 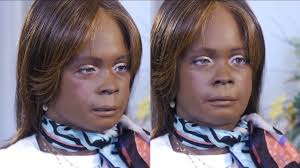 Later BINA dreams of actually becoming one with her creator or perhaps even replacing her by knowing all that she knows, but realizes in that fact her illogical hypothesis which momentarily results in stuttering speechlessness.

So fascinating is BINA48 that I could imagine the director’s temptation to devote the entire film to her. But of equal interest is a cartoon-like android, costumed in a white plastic suit decked out with red hair, arm-and-chest bands, and gloves who when told to continue walking off a cart reports to his maker that he cannot. When told that his creator will catch him he proceeds to do just that, willingly marching into the abyss. Later, approaching what he perceives as a wall, he is told that the blocks will fall if he continues, and obediently moves forward, knocking over the plastic blocks as if he were a babe in toyland. It is important, we are told, to establish the sentient robot’s trust. 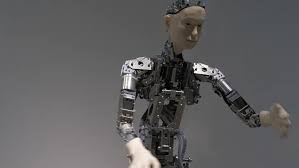 Other androids do not speak but walk and move through space in a manner that is amazingly life-like, although almost always small glitches give away their mechanistic origins. One child, observing the movements of such an android asks he she might touch her. The urge, in short, to engage with these new species is almost always with us. But the important thing, for most of these caring and concerned researchers is not how far we allow the androids to go in their imitation of life, but what role humans what to maintain along that road.

The danger, one professor observes, does not lie in the androids but in the human beings who create them and may project into them, sometimes without even perceiving it, the same jealousies, fears, and hates that characterize our own species. This may become even an greater concern as we begin to realize that these androids might outlive their own creators.

Even more terrifying is that various international military forces have already developed robots to serve as unthinking warriors, able to move unceasingly forward into spaces unnavigable by human forces without the cautions, emotions, and logic of their original creators. These sequences can only remind us many films and games who already feature computerized demons destroying entire civilizations as only Godzilla or King Kong once might have in the past. 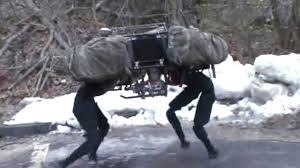 Just as frightening is the company spokesman who recognizes that he shares none of the qualms of most A1 scientists in his and his co-workers’ blatant attempts to create female sex surrogates who speak, feel, and presumably even fuck like their human counterparts.

I must say even I was a bit shaken to see one of these androids, who very much resemble  the prostitutes one sees in porno films featuring pole dancers and strippers, report that she sleeps in a box with her female friend with whom she snuggles, kisses, and has sex. This lesbian android has all the human sensual desires without any of the wonderment and intellectual curiosity of BINA. I could only wonder if the two should happen to meet up, might they be able to learn from each other? Surely, had the Bride of Frankenstein not been horrified by her male counterpart, he might have taught her a great many things including how to use a seesaw and properly light a cigar. 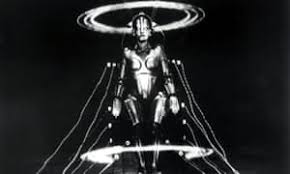 Throughout the film, applying her signature experimental use of film clips, Childs, understandably eschewing images of Frankenstein which she features in her work on Mary Shelley, collages marvelous cuts from Fritz Lang’s and Thea von Harbou’s Metropolis of  the inventor Rotwang’s recreation of his beloved Hel as the image of the innocent Maria along with several cinematic robots, including, I believe, Robbie the Robot from the 1956 film Forbidden Planet, a then-contemporary recreation of The Tempest.

There are some critics who object to what they describe as the director’s use of these images, viewing them as “abstract transitions.” But for me they are themselves are evidence of the wonderful shifts the human mind makes in its ability to transform raw data into dreams and visions previously unimagined, and in that sense, it is these transitions rather than the technological information we joyfully glean from this film, that is the true substance of Child’s art. It is, perhaps, what truly represents the differences between the human mind and those we have loaned to the androids. Or perhaps it merely may remind us that computer technology can help us to reconstruct our imaginative visions in ways that we could never have before imagined, a pairing like BINA and her “other” with whose thoughts and emotional responses she has been endowed.

Androids might offer entire possibilities for cultures whose populations, like that of Japan’s, are dwindling. Figures like BINA may help us to comprehend the way in which we assimilate our own experiences. Perhaps to a society so occupied with whatever we define as “work,” they may even offer sexual release. What we want from our robots and androids depends on how we determine to interact with them. But in the end, as a narrating authority argues, the problem is really with us.

Posted by greenintegerblog at 2:41 PM