having everything to do with all of us

Alejandro Ibarra’s 2015 short film, Safe and Sound, begins with a kind of rehearsal being performed by a handsome young gay man, Sam (Eddie Gutierrez), in preparation apparently for comments he is soon to make to his mother Maggie (Candi Milo), sister Paula (Michelle Prendes), and her husband, Diego (Cesar Sebastian):

“Mom everybody, thank you so much for coming. I invited you here to tonight because no, no, no no.”

“You know what, life is just a journey filled with obstacles and stupid speeches. God damn it...” 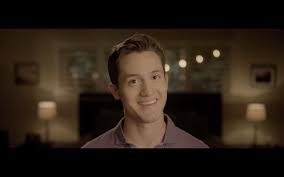 Nothing seems to be working. We suspect that the young man is perhaps gay and that what he’s about to confess to his family is that fact, all substantiated by the return home of his companion, Daniel (Michael Gmur), who kisses him, explains his lateness (he’s a teacher), and commiserates with Sam’s nervousness about the upcoming event. “Look it doesn’t matter when you tell them or how you tell them. It’s not going to be any less shocking or anything.”

Sam, who’s been cooking the dinner is also distressed that he has burned the chicken and put another bird into the oven, meaning that dinner will be late.

We also sense another underlying issue with this couple when Daniel suggests that it’s best to serve the meal first, “your people” respond better when they have something in their stomachs. Sam responds that the statement is extremely racist, but agrees with the sentiment nonetheless.

Apparently, we now realize not only this gay couple now need to convey whatever they are intending, but that the differences in their cultural backgrounds makes it even more difficult.

In short, Ibarra somewhat manipulates us into believing that this short film is going to be the standard “coming out to the family” work, with possibly further kerfuffles due to their cultural differences.

Enter, earlier than expected, the trio, pregnant sister, somewhat dense brother-in-law, and the mother, who is obviously reticent of the entire situation, while adoring and protective of her son. Sam explains that dinner will be late since “The oven went a little crazy,” a description of the kitchen appliance which more clearly describes his own state of mind.

Dan is missing from this early scene, so we might wonder if he is purposely hiding out until the news is conveyed, although the family seems to be cognizant that Sam is sharing the stylish apartment with, if nothing else, a roommate.

The family begins with the usual small talk, but even here there seems already to be rising tensions. Maggie pushes forward with the details of family events: “So let me ask you something  you’re gonna ride with us to Lorena’s quinceanera or you gonna take your own car? Also, I couldn’t get a plus one just so you know.”

Sam’s response,  “Couldn’t or didn’t want to?” hints at his mother’s resistance to the inclusion of Daniel in the family events. And at this point we begin to wonder if perhaps the family does perhaps know more about their son and brother’s sexual life than we at first suspected. 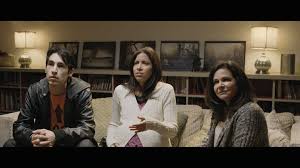 The conversation quickly flips back to the occasion. Why have they been invited? Just as suddenly as there has been a change in focus, the mother puts it all out on the table: is her son breaking up with “what’s his name?”

Both the derision in which she holds Daniel and the fact that we suddenly recognize that she is quite aware that they have been in a relationship, now puts Ibarra’s audience in the same position as Sam’s family members. Although we now perceive Maggie’s hostility to her son’s gay partner, we now have little clue of what kind of confession to which we are about to play the role of voyeurs. Sam’s uncomfortableness suddenly creates a kind of nervous expectancy within our minds as well.

As if on cue, Daniel enters the room wondering, quite obviously, who’s breaking up. He briefly kisses is “mother-in-law,” addressing her as Maggie, she coldly replying “It’s Mrs. Gonzalez.”

Still seeking for answers for their being called together, his sister Paula blurts out, quite in opposition to her mother, “Oh my God, you guys are getting married,” an announcement of which her husband also approves, but further upsets Maggie.

A bit tired of playing a game like “20 questions,” Sam suddenly blurts out: “I have cancer.”

The pause puts us all on edge, particularly those of us who have lived through the worst of the AIDS decades.

Sam, completely flummoxed by his brother-in-law’s ridiculous question is forced to explain that his disease is skin cancer.

The family is briefly relieved. After all, that is often an easily curable form of cancer, sometimes with just minor removal of the cancerous skin patches, But their relief is short-lived as Daniel explains: “Sam is sick.”

Sam, however, returns to the positive in his assurance that he has a “great” doctor who’s positive about the prognosis. “So I just have to start treatment.”

I’m being specific here just to make clear that the radical alteration that is about to occur is given context. For at the very next moment, like a cobra which has been waiting to strike, Mrs. Gonzalez, pointing at Daniel, hisses out the words: “This is because of you.”

Perhaps in our illusionary “post-AIDS” day these words seem utterly illogical, which is how Daniel, Sam, and the others all treat it. Yet for those of us who lived through that period, we comprehend that the kinds of cancers caused by the full name of the disease, “acquired immunodeficiency syndrome” focuses first on the acquisition of the ailment from another human being with whom the victim has had sex.  Maggie clearly recalls the time when patients and their doctors were forced to link their sexual partners with their own suffering.

For her, as she puts it to Daniel, “Ever since he met you his own life has fallen apart.  Everything that is wrong with him is here right now.”

From the young teacher’s point of view, her accusations are utterly without foundation. Is she trying to blame him for Sam’s cancer, he lashes back, before reminding her of the many instances, evidently, of her recriminations since the two young men first met. As he argues, she is afraid of losing the power she has over her son. But she also has not yet completely assimilated herself to her son’s homosexuality and his needs for  a love other than hers. And in that respect, the film is strangely connected to what we first thought Sam was intending to confess.

Finally, Sam, unable to bear this new squabble between those who love him demands for it all to stop. What is the very worst thing for a cancer patient he demands someone tell him? Quieting down Daniel states the obvious: “stress.”

During the melee, the chicken dinner has again burned up in the oven. Diego and Paula joyfully call out for pizza and the family sits down at the kitchen table to share the carry-in dinner, the soon-to-be mother Paula chowing down on several slices of a Hawaiian version of the Italian favorite.

After a few moments of communal dining, Daniel’s seemingly racial epithet seems to be a true assessment, as Maggie, turning to her son, conciliatingly inverts the focus of her former charges against Sam’s lover: “This has everything to do with us. This has everything to do with all of us.” Focusing on Sam, she emotionally stammers: “I cannot lose you. I cannot lose you.”

Daniel interrupts her: “I know. Me too.”

Some time after, the two are sitting on their bed, with Danny observing “As weird as that was I would say it went surprisingly well.” 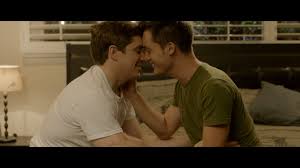 Sam pulls a large tuft of  his hair out. This will only be the beginning, he indicates. We’ll shave your head, I bet you’d be stunningly beautiful as bald man, suggest Daniel in an attempt to calm his lover.

But their fears are hard to contain. And Sam wonders about whether he might still be loveable in his altered state. Daniel, who has been hiding a gift for him, retrieves it: a ring, with Sam gradually realizing that he is being asked to marry Danny.

This is a comedy, after all, not an AIDS-era drama. Sam joyfully says yes before realizing: “Oh you know what? I guess we’re going to have to invite my family over again to tell them what happened.” “I take my proposal back,” Daniel laughs.

Posted by greenintegerblog at 3:24 PM