Claude Miller’s 1976 film, La meilleure façon de marcher (The Best Way to Walk) is one of the few films I’ve ever encountered in which I could not properly interpret its signifiers in order to comprehend what it was attempting to express.

I’d like to think this film was a well-intentioned film about a gay man, Philippe (Patrick Bouchitey) who, teaching theater at a teenage summer camp crosses paths with the school’s macho  athletic director, Marc (Patrick Dewaere), who upon discovering that Philippe may be a homosexual privately begins to mock and humiliate him. The fact that both men are clearly attracted to one another further complicates matters, particularly for Marc who finds his friend’s effeminate manners unbearable, particularly since his unrealized feelings for Philippe obviously reflect on his conceptions of his own masculinity. 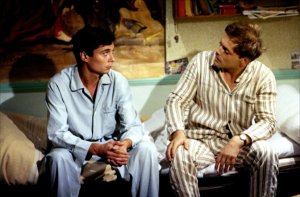 Philippe—who is not only closeted, but has not yet come to terms with his reasons for closeting himself—is still dating an attractive woman living in Paris, Chantal (Christine Pascal), with whom he would like to have a successful sexual relationship. The fact that his father is the thick-headed director of the camp (Claude Piéplu) who seems to have forgotten that both his childhood and his youth ever existed, further complicates matters. And given the fact that the various other camp directors, Gérard, Raoul, Léni, and Hervé behave more like the adolescents in which they are in charge transforms this drama, particularly given the tensions between the more intelligent Philippe and Marc, into a hothouse environment in which one can only wonder whether the howling students or the babbling adults will be the first to turn the camp into chaos. 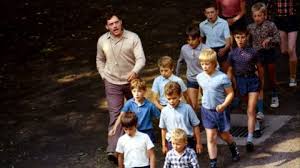 When Philippe suggests that instead of separating their students into those committed to the arts and those to sports that they join forces to permit their underlings a wider range of experiences—a suggestion, one suspects, that is aimed of working nearer to his torturer and source of unrequited love—the viewer almost holds his breath in anticipation of all-out war. And, in fact, that is almost what happens as Philippe, thrown into the swimming pool by Marc, almost drowns, and Marc, at a school going-away party, is stabbed in the leg by Philippe while translating Shylock’s poignant questions about his being Jewish into those of a confused gay man.

I must admit, however, there are a few things I have left out in my telling of this basic plot. One night, when the lights fail during a poker game, Marc knocks on Philippe’s door to borrow some candles, only to discover him, all alone, costumed in a woman’s dress and makeup. Although he does not share what he has discovered with the others, it becomes the basis for his bullying of Philippe, and also results in a somewhat strange bribe for his continued silence: that someday his fellow camp counselor may be able to provide some unspecified “services.”

Now I know that perhaps dressing up his character in drag was director Miller’s way of tipping us off that his “hero” was sexually confused. But it is difficult to know why he chose this method. Do most budding homosexuals dress up in women’s garb alone each night? Contrarily, I believe that those gays who practice cross-dressing do so that they might share the outrageousness or success of their portrayal of the opposite sex with others. To my way of thinking, it is an open expression of something transgender figures have been previously forced to hide, and feel freed in public to express through imitation. And, of course, there are many wonderfully convincing drag queens who are heterosexual.

I think it is similar to the fact that when men and women who have long felt uncomfortable with their assigned sex become transsexuals one of the first things they want to share with others is the fact of that transformation (see my essay-review of Pedro Almodóvar’s The Skin I Live In from 2011).

In my admittedly limited experience with these things, I have never heard of a drag queen who performs his art solo. But even more importantly, Miller has previously given us no evidence that Philippe might even be interested in garbing himself in women’s apparel, unless you imagine than in casting a young boy in an all-male camp as a princess he is speaking of his own private desires. Throughout the film, in fact, he continues to deny that he is gay and attempts, albeit unsuccessfully, to have sex with Chantal. Even if we might imagine that Phillipe is so smitten with Marc that he is rehearsing (an activity in which he daily immerses his students) a way to lure him closer—a bit like Rainer Werner Fassbinder’s Erwin who has a transsexual operation to become Elvira in hopes of attracting his former lover Anton Saitz—Philippe’s actions come as an inexplicable surprise in this movie. 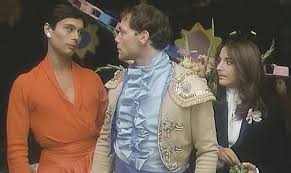 All right, so Miller has now told us that his central character likes to dress in drag. Yet, it seems to have utterly no significance to the story except in the penultimate scene when he dresses as a Spanish dancer for the costume ball (the theme of which he suggested) where he illogically expects Marc to dance with him for the entire night, and, when rejected, almost as if out of revenge for the abuses he has had to suffer from Marc’s hands, stabs him in the thigh, presumably ending his days as a jock. But again, the director supplies us with little logic for the act other than simmering anger, hurt, disappointment. Certainly, it is an extremely melodramatic gesture for the mostly infantile taunting by a hopeful lover. Perhaps he is disappointed that Marc never would explain what he meant by the services he might provide or simply that Marc never asked those services be provided.

It is as if the terrible play about jealousy and revenge that Phillipe asks his students to perform is being played out to adult community for some mysterious purpose. Even Phillipe’s bourgeois and easily scandalized father, who has sent away one the camp counselors for having a girlie magazine among his personal belongings, seems merely somewhat perplexed and irritated by his son’s public actions. 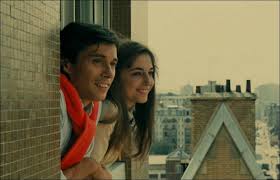 The last scene of this indiscernible work is the most confusing, at least to me. It appears that, despite all odds, Phillippe and Chantal, now living in Paris, have become a couple and are looking for an apartment. The real estate agent they have chosen is Marc, who shows them the space and congratulates them on their marriage. Marriage? What marriage? asks Chantal. As if on signal, she leaves the apartment, while Phillippe waits at the door for Marc to follow. Marc, forever the ladies’ man so it appears, politely says “After you” before the credits begin to scroll up.

Has Marc finally recognized Philippe as a feminine force? Is Philippe still interested in his former adversary? Have Chantal and Philippe decided to move in together simply as friends? Is the best way of walking to wait until one is politely asked to proceed? I can only report, I have no clue as to the answer to any of these questions, and have no idea whether these are even the proper questions to ask.

I might add, this picture presented us with lovely sets and camera work, along with handsome actors and good acting. As I suggested at the beginning of this short piece, I wanted to like this film. But for what purpose? The only connecting thread I can find in this mysterious creation is that grown men often behave more childish than the children of which they require good behavior. Might I also suggest that these pretty actors lack all credibility as humans in Miller's script.