A young German officer arrives at the front trenches of World War I just hours too late. Standing uselessly by the edge of the German excavation with bombs exploding all around him, the man, immaculately uniformed, having been trained in the best of German military schools, wonders if it is truly necessary to climb down into the trench. It is, says his captain. But that very moment the  soldiers around him begin to shout out, rising from their smoking hells to dance in joy. The War is over. The captain assures the newly arrived lieutenant that it is simply a piece of propaganda passed to his soldiers through Allied pamphlets. 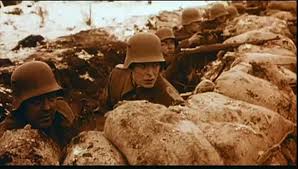 In the very next scene the officer wakes up confused about his whereabouts in a French hospital room, whose nurses, doctor, and governmental representatives, about to celebrate his recovery, are shocked to hear him, having come out of his long coma, speak German, his helmet evidently having signified that he had been one of them.

Now in full color, the film reveals post World War I Berlin, our naive officer having returned home with a pig, half-covered by his long wool coat, in arms. So begins the comic-war drama Just a Gigolo, directed by British actor and child soprano, David Hemmings—yes, the photographer of Michelangelo Antonioni’s Blowup and, later, in Roger Vadim’s Barbarella as Dildano, the leader of the Sogo underground, who long before those roles had sang as a boy soprano, Miles in Benjamin Britten’s operatic adaptation of Henry James’ Turn of the Screw.

Before I go any further I should reveal the fact that the movie, one of the most expensive films of its day, in part because a portion of the original was destroyed by fire, was a utter flop which, as one of its stars put it, when the actors meet one another today they cover their faces in embarrassment.

As I argue in this essay, the film is actually quite fascinating, if not a fully successful work of art. I think simply by mentioning the cast anyone might perceive the problem. Let us start with David Bowie who performed as the German officer, Paul Ambrosius von Przygodski, described above. His mother, Frau von Przygodski, was played by the Austrian-born actor Maria Schnell (who in her day played opposite great actors such as Yul Brynner, Gary Cooper, Marcello Mastroianni, and Marlon Brando). Kim Novak, in her last film role, plays one of Paul’s elderly  lovers. The great German actor Curt Jürgens acts the role of the Prince. And, also in her last screen appearance, Marlene Dietrich is Baroness von Semering, head of a bordello for beautiful young boys servicing elderly women, who sings the 1929 German song originally composed by Leonello Casucci and Julius Brammer, with English by Irving Caesar,  “Just a Gigolo.” 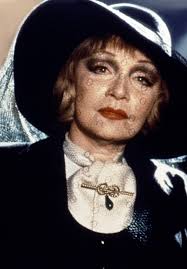 Even the less noted figures, singer Sydne Rome, Rudolf Schündler, and Werner Pochath (who died of AIDS in the arms of his longtime lover, the chief choreographer and general manager of the Hamburg State Opera, John Neumeier) had notable careers. With such remarkable talent on board only something spectacular was to be expected. As Vincent Canby of The New York Times bluntly put it: “It's a very bad movie of more than routine interest because of the talent of many of the people involved and because of its literary antecedents.”

The screenplay, credited to Ennio de Concini and Joshua Sinclair, seems to have been inspired, at least in part, by Christopher Isherwood's Berlin Stories as well as by various works of Günter Grass, including The Tin Drum. The production, directed by Mr. Hemmings, deals in all of the cliches one now associates with movies set in Berlin in the decadent 20's, everything from the first film version based on I Am a Camera and its spinoff,  Cabaret, to Ingmar Bergman's The Serpent's Egg, which may well have been made after the Hemmings film. Just a Gigolo has been knocking around, unreleased, for several years.

Finally, the last sentence of Canby’s review is very telling: “Maybe only Rainer Werner Fassbinder could do justice to the film's source material.” For indeed, just two years after Hemmings’ film was released, Fassbinder did indeed film a work remarkably similar, in some respects, to Just a Gigolo, his remarkable masterwork, Berlin Alexanderplatz.

Indeed, Paul might easily be seen as a better educated and far more cultured version of Fassbinder’s Franz Bieberkopf (his last name, in German meaning “beaver head,” the name Fassbinder also gives to himself in Fox and His Friends) is a fool, a kind of Simpliclus Simplicissimus who in Franz’s case has just been released from prison. So too has Paul been released back into the Weimar Republic from the prison of war, and like Franz does not quite recognize the changed world into which he has been thrust. The daughter of his family’s servant, his childhood friend Cilly (the name also of one of Franz’s woman friends) has become a revolutionary of the streets, who in this instance sings Bowie’s “Revolutionary Song”—written most definitely in the Kurt Weill tradition—in whom Paul, now “shell-shocked” as she describes him, has no sexual interest. 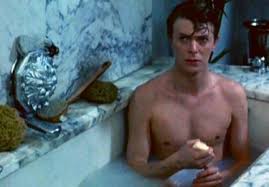 Everyone, including his mother, responds upon reencountering him, “I thought you were dead,” as well might be given his complete aloofness to the suffering they have to endure and his utter passivity to a world which now has no place for him. Just as Franz takes up selling shoelaces, the Nazi newspaper, and finally gay-oriented magazines, so does Paul take on a job of a human beer can that advertises the product. If Fassbinder’s “hero” falls accidentally with the future would-be Nazi Reinhold Hoffmann, so does Paul almost accidentally come into the clutches of the Nazi  Brownshirt leader, Otto (Pochath), willingly sharing his bed more than the cause that Otto espouses.

After Otto demonstrates his complete misogynism by slapping Paul simply for talking to Cilly (Rome), the handsome boy determines to shift jobs once more, this time becoming the kept lover of Helga von Kaiserling (Novak) whom he meets at the funeral of her military husband as warring Communists and Nazis shoot it out in the cemetery where is about to be buried. Ducking down beside the coffin, Paul and Helga suddenly discover themselves atop one another and in their deep sense of fear and sensual adrenaline simply cannot resist one another. Perhaps we must acknowledge the influence of Evelyn Waugh upon this work as well. 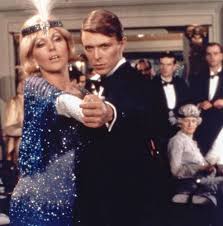 When one has already become a bisexual male whore, as has Paul, why not take a job with more money and less responsibility that Baroness von Semering offers? Besides, Paul has all the credentials necessary for the position: a beautiful face, a good education, and a complete lack of moral scruples; besides Helga has just taught him how to tango. Besides, even if you’re “just a gigolo...selling each romance,” there are all those other pretty boys hanging around at every party.

Paul’s final party, an evening in bed with Cilly who has just married a Prince (Jürgens), ends rather badly in another shootout between the Communists and Nazis. Both sides claim him; after all he has already given up his living body to both causes. But as Otto previously declared, “we will get him in the end” (all puns intended). Accordingly, Paul unintentionally becomes the first hero of the Nazi cause that leads to Hitler’s rise. 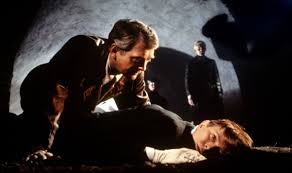 Thus, Hemmings turns in a rather sophisticated and often outrageously witty picaresque comedy very much in the manner, if not with the profound insight and directorial accomplishment, of Fassbinder.

The problem is simply that Just a Gigolo has a few too many irons in its fiery expectations. The fact that Cilly abandons the revolutionary cause to become a kind of Sally Bowles-like cabaret singer before moving on to Hollywood stardom and her marriage to the Prince—if at moments seems charming, particularly when she sings “Don’t Let It Be Too Long”—may certainly elucidate the writers’ themes, yet her trajectory ultimately takes us away from the true focus of the film.

Most importantly, as good as Bowie always is in floating through his numerous film roles, he’s hardly a good candidate for the passive role in which Just a Gigolo casts him. Bowie is simply too sexy and talented not to have the opportunity to belt out a song or two, dance up a storm instead of a tango, or, at least to let us watch him zestfully jump into either Otto’s or Cilly’s bed. As it stands, he is in this role after all just a kind of gigolo, a pretty face who has sold out his true talents to the lure of Hemmings’ grandiose cinematic aspirations; Bowie didn’t even get to meet Dietrich since she filmed in Paris while he picked up the glass of champagne she offered on a stage set in Berlin.

Nonetheless, along with the wonderfully goofy music of Gunther Fischer, the jazz era renderings of The Pasadena Roof Orchestra, and even the stylings of The Manhattan Transfer, there is something quite wonderful about Hemmings’ version of the Weimar angst. Perhaps after these many years of dismissal, it’s a film worth more careful attention.


Posted by greenintegerblog at 9:27 AM