everyone gets what they wants

The LBGTQ world changed significantly between the stage premiere of Joe Orton’s Entertaining Mr. Sloane in 1964, and the movie version of six years later, directed by Douglas Hickox in 1970. What was a razor-sharp black comedy about middle-class hypocrisy with regard to any moral values and, in particular, all things to do with sex, had now suddenly—so producers felt—to be encapsulated within the burgeoning mod revival in “swinging London” that began in the mid 1960s with rise of pop art and psychedelic art that would come into fruition in the late 1970s as the so-called “mod revival.”

It is perhaps odd to suggest this, but the original Orton play perhaps had more in common with the plays of the British “Angry Young Men” such as John Osborne, Arnold Wesker, Edward Bond, John Arden. Shelagh Delaney, and Harold Pinter of the late 1950s and early 1960s than with the kind of bacchanalian Britain expressed in the world of Colin MacInnes’ late 1950s projection of the soon-to-be mod swingers in Absolute Beginners (not brought into film until 1986 by Julian Temple starring David Bowie).

As the writer of the Eye for Film blog succinctly put it:

“Between the first showing of Joe Orton's seminal play and the release of Douglas Hickox's film in 1970, the world changed dramatically—and not just in theatre. Sex between men over 21 was legalised in England and Wales (it would take another 13 years for Scotland to catch up) and the country had begun to talk about homosexuality and countenance it as part of life—it was still widely disdained but the old conspiracy of silence was broken. The fear which had controlled many LGBT people's lives was beginning to break down.

In this different environment, Sloane still shocked, but for slightly different reasons. Most of those going to see it were already familiar with the rough outline of the play. Perhaps in the interests of preserving the original impact, Hickox upped the ante with suggestive camerawork and props. The see-through dress which Beryl Reed wears in the opening scenes sets the tone for a banquet of sleaze that expands upon the play with playful reference to the pop culture and cinema of the era.” 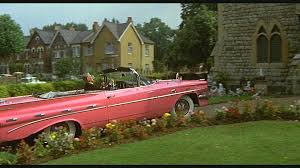 One might add that Hickox also brought into Orton’s play Ed’s bubblegum-pink Pontiac Parisienne auto (which formerly belonged to Syd Barrett of Pink Floyd), a wink to a whole world through a camp emblem never imagined by the original playwright. If Orton’s astounding predicative plays contain many elements that now appear to be expressive of “camp” humor, at the time in which the author wrote them they were perceived more like grenades being tossed into an audience that had been far more properly brought up on the simmering melodramas of sexual frustration, dissatisfaction, and repression (read gay) of Terence Rattigan’s dramas, all of which Orton, like the “angry men,” detested. Ironically, the success of Entertaining Mr. Sloane can be attributed, in part, to Rattigan’s financial sponsorship of it.

An even worse addition to the original work was Hickox’s introduction of some of the cheesiest songs that one might ever been scratched upon a film tape, including George Fame’s title song with lyrics by J. Alexander Ryan:

that is what he said

him with smooth skin

with the blank eyes.

And it’s surprising how

it’s progressed from there.

Dare I hope given rope enough

At least it uses internal rhyme! But so gawd awful it was in full that I nearly was ready to chuck the whole movie in and agree with Time Out’s put down, which argued that the play "loses much of its savoury charm in this movie version. Clive Exton's script opens out the play conventionally, to little effect, and Hickox's direction shows little flair for farce in general or Orton in particular."

Yet Beryl Reid’s floozy portrayal of the nymphomaniacal Kath, Harry Andrews contributions as her misogynistic gay S&M-inclined brother Ed, and Alan Webb’s representation of their dithering, pickled onion-eating Dada, along with the beautiful peroxide-haired smooth boy with blank eyes, Sloane, personified by Peter McEnery, convinced me to hang on for the wild ride I knew was ahead—and I don’t mean the short drives Sloane nightly steals on Ed’s pink Pontiac with his boy- and bird- friends. 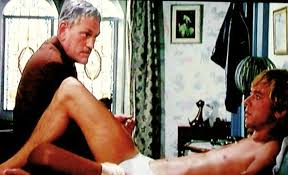 Surely you know the story even if you’ve never seen the play or movie. The pretty murderer, despite Ed’s insistence that he stay away from the birds and, in particular, from his promiscuous sister (Ed: “Too many lads being ruined by birds! I don't want you making overtures to my sister. Does she disgust you?” Sloane: “She does a bit.” Ed: “Women are like banks. Boy, breaking and entering is a serious business.” Sloane: '”I’m a law abiding citizen.”), as she might express it, “puts a bun in her oven” and seeks a way out by turning his body over to the inevitable whips, chains, and caresses of Ed.

In the meantime, since the dotty old Dada, despite his waning eyesight, spots Sloane as the killer of his former boss, the pretty boy must first do him in.

After a little bit of fuss over the death of their dearly beloved father, the sibling duo decide to flip their roles from being slaves to Sloane to his becoming a husband to the two of them through the most sacrilegious ceremony ever staged, Ed, with the credentials of a former navy man, marrying the lanky lad to his sister, and she, out of a whim, marrying the buggering bloke to Ed, in both cases stealing the Bible out of their now rigor-mortis stricken Da. No one ever might have imagined that such a thing would ever be possible: yet here we are in 2020 any day now we may possibly read of a bisexual bigamist. 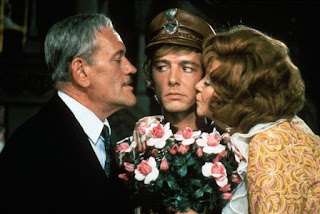 If Reid, in her zany dishing out of her boobs and motherly affections dominates the film, Andrews, who long played macho leads before later in his life coming out as a gay man living with his partner of 30 years, comes off in this upside-down world as the man of patriarchal authority, able to rid himself of the dada, who because of catching his son in bed with a “felony” refused to speak to him for most of his life, but of arranging a way to please his voraciously sexually hungry “skin and blister” (as the cockneys rhyme with sister). One might say that in Orton’s working class fairy tale, everyone gets what they wants.

Posted by greenintegerblog at 9:01 AM