Billed as India’s first silent gay film, Sisak (Silent Love) is a work in which two gay men, one an apparent business man or teacher who apparently is married (Jitin Gulati) and a younger man just beyond boyhood (Dhruv Singhal), encounter one another on the Mumbai subway and over several days fall in deeply in love—without touching or even speaking to one another. Contrary to nearly every gay film I review in these pages, director Faraz Arif Ansari’s characters represent gay love while fully dressed and without their sexual arousal resulting in the need to pull off their clothes and their clothes and jump into bed. Yet, as viewers, we feel their intense encounters so deeply that we long for them to simply brush up against one another, put a hand upon a shoulder, or simply lift up their fingers intensely pressed into the metal stanchions and straps of the nearly always moving space they cohabit to simply press flesh upon flesh. 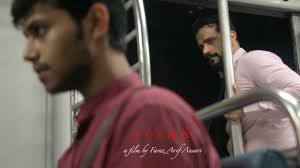 In the very last scene, where Jintin’s character rises and moves behind where Dhruv is seated, moving his hand to the bar just behind the younger boy’s back, we are almost certain his arm will slip into the space behind where Dhruv sits in intense anticipation. And when Dhruv also stands, the two of them coming face to face, we watch with almost bated breath for Dhruv to move his feet a few inches closer, for Jintin’s hand to slide down the metal pole upon which they share their balance to satisfy the desire so welled up between them. Their books and briefcases are left behind on the seats as if, in fact, they have shed their clothing. 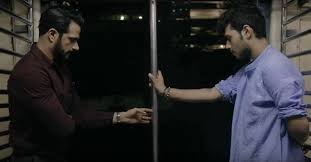 We also perceive that their strange standoff represents something so close to a sexual orgasm we can almost imagine their bodies quavering with the explosion of relief. And the final long scene in which, walking down both sides of the subway, they encounter full-length views of one another through the open, about-to-be shuttered car doors, the film comes so close to the cliché of lovers running alongside departing trains to express the intensity of their soon-to-be lost love, that we almost perversely imagine these gay lovers might suddenly both pull themselves back into the tram cars to speed off together into a life of the “happy ever-after.” Yet neither of them board the car, and although they may, in fact, encounter one another on the train again, we are certain that their “brief encounter” is now over, that for proprieties’ sake, if nothing else, they will pull back into their ordinariness ogling each other with only fond regrets.

Previously, we have seen them share not only their intense daily glances, but tears, frowns, smiles, and even the present a book Jitin’s character leaves behind (a fiction by the Japanese writer Haruki Murakami, if my agèd eyes read it right) for Dhruv to read. Why use words when they have so successfully expressed their emotions without anything else needed to be said?

And then, if you were an Indian LGBTQ man or woman in 2017, the year of the film, you might come to this work with a much fuller sense of the film’s political ramifications that viewers from other cultures might. As Ansari has remarked in a conversation with Varsha Roysam:

"'My film is a political statement.’ Sisak, with its furtive glances and timid gestures, hair-raising music, and the chugging of the Mumbai local, silently retaliates against section 377 of IPC. It was December 11, 2013. Faraz Arif Ansari sat in a quaint café nestled in Nainital, on what seemed like an uneventful day. The news was turned up, competing with conversing voices, and what Ansari heard left him hollow. The Supreme Court had recriminalised homosexuality, upholding the infamous section 377 of the Indian Penal Code. “What do I do?” was the thought that ran through the mind of this devastated 30-year-old filmmaker whose sexual orientation was now punishable. With an overwhelming urge to do something, anything, he did what a filmmaker does best—weave a story.” 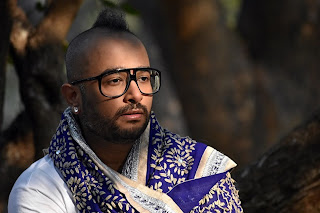 Ransacking his meager savings, using the famed overcrowded Mumbai subway illegally, and with some financial backing from the actress Sonam Kapoor, Ansari, his cast, and co-workers “ran the rails,” so to speak, playing urban hoboes for art’s sake.

My actors would change behind dupattas in the corners of the train,’ he recalls. ‘And we didn’t have the money to get the permission to shoot on the train, which costs Rs 6.5 lakhs for three hours!’ So, Ansari and team filmed guerrilla style, sneaking their way through the platforms while pretending to be exorbitant tourists. ‘It was absolute madness’....”

The real madness, however, was the reinstatement of the Indian Penal Code 377, which read: “Unnatural offences: Whoever voluntarily has carnal intercourse against the order of nature with any man, woman or animal, shall be punished with imprisonment for life, or with imprisonment of either description for a term which may extend to ten years, and shall also be liable to fine.”

Fortunately, it was finally ruled unconstitutional in 2018. But the year before, when Sisak was released, the code was still in place. This small gem of a film’s final moments were later devoted to a dedicatory cry in the wilderness:

“After 71 years of Independence, the Supreme Court of India decriminalized homosexuality on 6th September, 2018. Homosexuality in India continues to remain a taboo. Many love stories fail to find a voice. Sisak is a dedication of to all the silent, unsaid love stories.”

Posted by greenintegerblog at 11:03 AM