the boy who taught his teacher everything

There have not been many reviews in English of the wonderful Italian film of 1986, Gianni Da Campo’s The Flavor of Corn,* but the few critical comments expressed—the most notable of which are by the US writer Chai Walla on his Night in the Lens blog—emphasize the utter innocence of the film and its characters despite the fact that it focuses on an intense friendship between a young teacher, Lorenzo (Lorenzo Lena), and his students, one in particular, Duilio (Marco Mestriner) a young pre-teen who clearly has intense feelings for him. The love the boy feels for his “professor”—as all teachers in his rural village are described—clearly transcends the boy’s own wishes that he had a brother like Lorenzo, but given Lorenzo’s devotion to the boy, hinting at, if not precisely declaring issues of pedophilia—particularly if we return to the roots of that word, παῖς, παιδός (paîs, paidós), meaning "child", and φιλία (philía), "friendly love" or "friendship."

There is no question whatsoever that the young handsome Venetian university student, perhaps only 19 or 20 himself, has a deep love of children—he appears to be a model teacher in his co-ed classroom— and particularly in the case of Duilio he establishes a close friendship, even going so far as to relocate to the nearby village to be closer to Duilio and other male students he is tutoring for free. Some of them are ill, and others in this farming region miss months of schooling when they are forced to help out during planting seasons on their families’ farms. 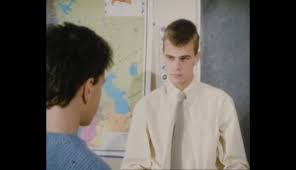 But Duilio, at least early on in this work, is a regular in the classroom. Clearly Lorenzo has a particular bond with this child, who writes in one essay that he has an “impossible but unchanging dream” and who later writes out a copy of his own poems to share them with his beloved teacher. Eventually, Lorenzo becomes good friends with the boy’s grandfather (Mattia Pinoli), father (Paolo Barlato), and stepmother (Marina Vlady), who come to make the professor feel like he is one of the family, welcome at any time for a visit. Duilio even gives Lorenzo a present of a small boat he has carved from wood. 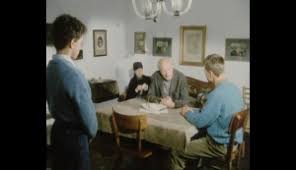 There is utterly no outward indication, however, that the relationship between the boy and man is in the least sexual. Indeed, Da Campo goes out of his way to establish his central figure’s normative heterosexuality, showing Lorenzo, upon one of his returns to his school from Duilio’s farm, having sex in a train car with a beautiful woman, Cecilia (Alba Mottura), who has been eyeing him. Their sexual relationship further develops when Lorenzo rents an apartment in the town near Duilio’s farm.

Nonetheless, we recognize something is missing regarding Lorenzo’s and Cecilia’s sexual affair, particularly since she has a fiancée, Bruno, who after two years she is now planning to marry, and, even though Bruno apparently has no problems with her sexual peccadilloes, she will not be seen in public with Lorenzo.

As Walla elucidates the situation, emphasizing the differences between Lorenzo’s encounters with his student and his family and between the more urban adults:

“One day after a visit, as Duilio is seeing him off on a bus headed back to the village, he gives Lorenzo a wooden boat that he carved. In the context of what the boy has to give – company, hospitality, and the wisdom of the farm – the gift is tremendously meaningful. Before the bus takes off, Lorenzo’s eyes dart between the boy standing on the curb and gazing back, and the young woman in a fur coat across the aisle who is making eyes at him. There is an immediate contrast between the boy’s innocent, uncorrupted affection for his teacher, and the young adult world of impulsive sexual encounters, intrigue, and predatory gazes. Lorenzo exchanges glances with the woman on the bus, and in the next scene the two of them are having sex in a train car. Back in the adult world, the recently-grown world, the genuineness falls away. People start using each other, things become superficial.”

Surely that difference between the kind of innocent love Duilio offers him and her transactional love—at one point she declares that she loves whom she wants when she wants—that cannot be openly expressed in public is one of the reasons why Lorenzo suddenly breaks off his relationship with Cecilia.

On the other hand, despite Lorenzo’s acceptance by the boy’s family, the surrounding society is so conservative that neither can he express the love and Duilio feel for one another in public.

Early in the film, Lorenzo is called in by the school’s principal to task for reading to his students chapters from Vasco Pratolini’s Family Chronicle, a classic that, while resonating with his students for its portrayals of rural love and death, is seen by authorities as representing these issues in terms that are too mature for children. Even his having corrected a verb in one of his student’s essays that suggested his sister “purchased” a baby, instead of simply “had” a baby is seen as being too risqué, since the preteens he teaches are presumed not to comprehend the idea of birth.

In other words, a kind of false innocence is being enforced upon his students that contradicts their very adult experiences they have had in their farm lives.

This is particularly apparent when Lorenzo spends one night with Duilio and his family. As Lorenzo, who has accompanied the boy to watch him milk the cows, turns to exit the shed, Duilio gently grabs hold of his hand, holding it for a moment before leaning up to kiss his professor on the lips. This, the only even slightly sexually-related act between the man and boy in the entire film, is however crucial to the series of events that occurs after. 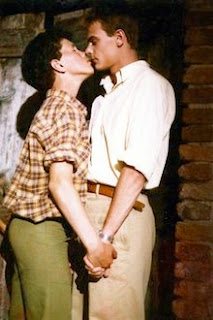 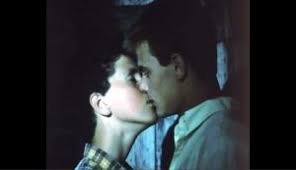 For one thing, the stepmother, who has observed them leaving the shed, suddenly ponders the relationship between them. For another, particularly after they climb the stairs to retire to their own bedrooms with Duilio announcing my room is the last one down the hall, it creates in Lorenzo a series of disturbingly unanswerable questions.

Soon after, the father visits the school to tell Lorenzo that in the future, because of the needs of the farm, Duilio may not be able to attend his classes. Sensing other reasons behind this statement, Lorenzo prods his student’s dad, wondering if his wife has not said something about their relationship. At first the father denies it, explaining only that it has also troubled him that Lorenzo has begun giving his son the expensive gifts of encyclopedia volumes (the teacher explains that these are simply out-of-date copies thrown away by the university) before finally admitting that she has simply brought up the question of why Lorenzo has been so attentive to their son. The father assures the teacher, however, that he is still welcome to visit at any time.

Yet these questions begin to haunt the innocent man. When an older boy in his classroom (held back because of the classes he missed from seasonal farm duties) is caught displaying his erection through his jeans to a younger boy in the classroom—a fairly normal adolescent occurrence in schools across the world—the normally mild spoken Lorenzo grows virulently angry, sending the boy away from his other students. Obviously, the attempted sexual initiation of the elder boy to the younger has struck too close to home.

Riding in a public gondola while visiting back home in Venice, Lorenzo seemingly cannot keep his eyes off of a man, obviously gay, intensely talking with two young women. Finally, forcing himself to turn away to stare in the other direction.

Soon after, Dunilio’s older sister, who has been living in Milan, returns for a visit and Lorenzo is invited out to the farm to meet her. With everyone else out working in the fields, the two slip away for a few hours embracing one another in the sun until he pulls away from her sexual advances, fully aware of her young brother’s jealousy. 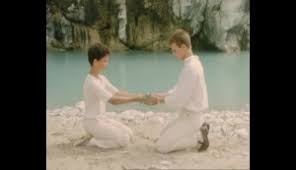 Upon another visit from Cecilia, she laughs at a postcard she has found outside his door. Evidently you have a secret admirer, she laughs. He tells her it’s from a 12-year-old boy. “He’s one of your students?” “No,” he responds, “he’s someone who taught me everything.” Of course, we can understand that as an expression of appreciation for all the little things Duilio has truly taught him, the differences between trees, how to milk a cow, how to drive a tractor. Yet, we also recognize that in that sentence he is saying something far deeper, hinting at the fact that the boy has taught him who he truly is, perhaps a homosexual or simply someone with a now vastly wider recognition of whom he might love.

The card calls Lorenzo back to Duilio’s family and farm; his grandfather, who has grown close to the teacher, has just been hospitalized for tests which we already know will reveal that he is dying of the last stages of cancer. They meet with the dying uncle and, once more, this time without the stepmother’s suspicions, he spends the night. Long into the night we observe that Lorenzo is in the boy’s room, sitting in a chair while watching Duilio sleep as if he were keeping guard over the innocent, but also wrestling with his own demons.

In the morning, as the taxi comes to pick him up, he tells the boy’s parents that he will no longer continue as a teacher and will be returning to Venice. Most importantly, he makes it clear that they will no longer see him again, a fact that the boy, still protected by his innocence, cannot comprehend. “Why can he not come back?” he plaintively asks, without perceiving that his very plea is the answer to his question.

Innocence lost? No and yes. Duilio’s love remains pure while Lorenzo has come to know himself well enough to know his love has transformed into something other.

The Flavor of Corn, the last of only three films Da Campo made, is a true masterpiece for both LGBTQ and heterosexual audiences.

*The film apparently is not available in any on-line screening venue. I purchased a DVD version of the film with English subtitles released by Award Film International.

Posted by greenintegerblog at 2:16 PM