Heidi Ewing | I Carry You with Me (Te Llevo Conmigo)

Noted documentary filmmaker Heidi Ewing, in her first narrative film, explores the lives of New York chef Iván Garcia (Armando Espitia) and his medical-trained lover Gerardo Zabaleta (Christian Vasquez) in the moving inspirational drama I Carry You with Me that combines growing up gay in a basically homophobic culture with the painful immigration of the two, years apart, to a not so-welcoming US. It is almost as if these two iconic figures must endure the hostility of two cultures while abandoning those in their lives they most love. And despite the fact that over many decades we have been told similarly remarkable stories of the kind fortitude these two men and their friend Sandra (Michelle Rodriguez) show, Ewing dramatizes it so very effectively that anyone with an iota of empathy with the sufferings of others is almost embarrassed to be living in cultures that so torture those who would simply share their love and work for better lives. 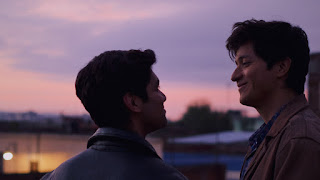 It begins in Puebla, Mexico, where the son of a seamstress Iván grows up as we watch, with the help of a couple of flashbacks, him slipping into a new completed quinceañera gown to play with his neighborhood friend, Sandra, an act for which is gently reprimanded by his father. Gerardo’s strict wealthy authoritarian father is far more homophobic, trucking him to an isolated cornfield after some incriminating evidence of homosexuality, where he leaves him in a makeshift open grave into order to make clear where, in their society, to where a gay life will ultimately lead.

Despite their somewhat unpleasant childhoods, both grow up rather healthfully, Iván marrying and bearing a child before he divorces, Gerardo living a rather open gay life in the city. Despite studying to be a chef at a culinary school, Iván can find work in a restaurant only as a dish-washer who is often assigned even more rudimentary tasks such as fixing the toilet. Despite his pleas to at least be given a chance to demonstrate his cooking skills, others are hired instead. Frustrated, he temporarily escapes his job by attending a large secret club, a gay bar which obviously serves a wide range of the gay, lesbian, and transsexual community. And it is there he meets his future lover, Gerardo. Jude Dry, writing in Indiewire nicely describes their meeting:

“The two young men meet in a gay bar in Puebla, where Gerardo (Christian Vazquez) gets Iván’s attention using a flirtatious laser pointer. They acquaint themselves in a colorful, dimly lit bathroom, exchanging revealing conversation about life as a queer man in Mexico circa 1994. “I know how to pass,” says Iván. “You’re obviously really good at it,” Gerardo replies. Using a well-placed mirror and a shaky handheld camera, Ewing imbues the meeting with an intimacy and magnetism that augurs their lasting connection.”

Yet when Gerardo discovers, a few days later, that his new friend has also been married and has a son, his first reaction is simply that the attractive acquaintance, as the cliche expresses it,  “carries too much baggage” for a successful relationship. Nonetheless, the two eventually do move in together, ending in a major crisis in Iván’s life when he is unexpectedly visited by not only his wife and son, but her mother, the three of them discovering that he is gay and is living with Gerardo. Visits to his son are immediately suspended.

Now fearful of being further outed and with no possibility of playing a role in his beloved son’s upbringing, Iván makes the almost impossible decision to leave his companion behind as he and Sandra decide to be smuggled into the USA with a few others. Overweight and without the outdoor training to keep up with the others, particularly when faced by the air raids of US Ice officers, Sandra and her supposed “husband” are forced to take a route deeper into the desert, she finally claiming that she cannot go on. At one point, at their deepest moment of despair, they encounter a passing car who reports that they are now on US soil, even offering them some water and food, while still insisting that she cannot pick them up because all will certainly be discovered and arrested.

The border crossing immigrants almost miraculously do find safety within the US and end up in New York City, the film shifting back and forth now between the an older Iván Garcia, who, because of his illegal status, has only been able to find menial jobs in his new homeland, and the Mexico where he has left Gerardo and his son behind.

He continues to write home with fabrications of good news; but his promises of sending for them or of returning as a wealthy man have come, over the years, to nothing. His son has grown up without knowing his father, and his lover now himself contemplates “crossing over” to be with his still much loved friend. When Iván consults with a supportive lawyer about the possibilities of his returning briefly to Mexico to see his son, he told that if he does so he will be deported.

Eventually he does find work as a short order chef in a restaurant, yet he still feels a great sense of emptiness in his life, as does his friend Sandra working for “slave” wages in a business establishment. Both consider returning to Mexico, having seemingly lost the possibility of achieving their private American dreams.

Even when Gerardo, abandoning his far more successful career as a doctor in Mexico, joins Iván in New York, joyfully reuniting them in their sexual relationship, Iván continues to express his dissatisfaction with the world he has found in the US, missing the look of places and smells of food and nature in his homeland. 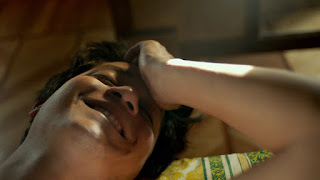 Combining the small financial resources remaining, they bet it on the purchase of a small restaurant which gradually grows into a successful business, with Gerardo as the host and Iván happily reigning as the executive chef in the kitchen. Indeed, the two make their business a home for new immigrants arriving in the US. And it is as successful entrepreneurial legends that they personally share their story with the director.

Ewing describes the fact that, having worked with them for years to flesh out their story, they left the actual filming process to her alone, perhaps being a bit abashed, at first, by the way they were ultimately portrayed in the movie. Having now seen the film several times, she adds, they are now quite pleased with the results. But both the movie and the director strongly hint that their current joys in their now successful lives will always be laced with a poignant sense of what they also have had to leave behind, not only their own youths, but the love of family and friends, as well as the myriad sensory pleasures of a life in their homeland. Theirs, obviously, is the story of millions of immigrants everywhere who choose or are forced to give up everything by which they define themselves to become someone other in a world in which that they realize will never fully feel at home.

In this case, the director has quite brilliantly recounted not just one crossing, a dangerous trek across a geographical border, but another kind of crossing from a more forbidden and often hidden sexual world to a more open, yet still somewhat disorienting one, both making extreme demands of the mind and heart.

Posted by greenintegerblog at 2:42 PM