invitation to a sexual act

There is, at first, something rather charming about Norwegian director Henry K. Norvalls’ horrific short film, Shower (2012). A swimmer (Svend Erichsen) is showering in a public facility. Another hunkier man (Per Magnus Barlaug) enters and takes another stall. Within a few moments, the first showerer hears strange noises coming from the other stall, pauses the flow of water, listens, and returns to his cleanly business. 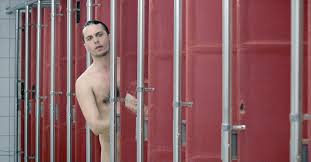 Soon after, he hears the sound of pleasurable groans, and again he stops momentarily what he’s doing, only to return to bathing himself. When it happens a third time, his curiosity, and we can presume his hormones, are somewhat aroused, and he turns off the water, darts out of the stall, and quickly moves into a stall closer to the sound of the pleasure.

A bit flummoxed, the swimmer suggests this not the place for that kind of behavior, with the man responding once more about how much enjoys it, moving out into the changing room, presumably with an erect penis.

Even more angered by the recalcitrant masturbator’s behavior the first man once more expresses his disconcertion about the second’s public sexual activities, although one might argue with only one other being to observe him, his actions are just slightly “public,” and Barlaug’s character even suggests something like that, arguing that if other man truly found such behavior so abhorrent he might have left immediately, but instead has stayed and even moved closer to the engagement.

The first man briefly turns away, but turns back when the sexually aroused man tells the first that he is even more excited by the other’s observation of the acts, and outrightly asks him, “Put your hand on my shoulder.” 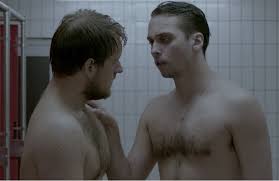 Almost as in slow motion, Erichsen’s character moves forward as if in a trance, putting his hand on the other’s shoulder as the man again proceeds to jack off.

The first man’s eyes widen in witnessing the immediate action, stuttering out the words, “Is there something else you want me to do?” He seems to almost be pleading for further involvement, for an invitation to participate in the sexual act.

After what seems like forever in a 7 minute film, the second responds: “Kiss me when I come.”

An even longer few seconds of only the sound of the hand slapping across his penis ensues, followed by a growing moan in the masturbator’s chest, as he cries out “Now, now,” the first man, wearing a gold chain from which hangs a tiny cross, moving toward other’s lips for a kiss.

At that very moment, an older man (Bjarne Hjelde) enters the showing room, obviously witnessing their acts. He says nothing as the camera returns to the expectant faces of the two men. 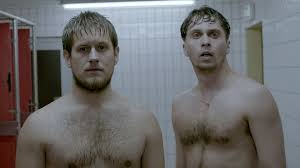 Without warning, the first man slugs the second, sending him to the floor, bending down to hit him again and again and again—so many times that it is difficult to even believe what we are suddenly witnessing immediately after his previous gentle and almost teenage-boy like behavior. His obvious wonderment and even joy has turned, with a blink of the eyes, into hatred, as the camera pans back to show the body of the dead showerer, blood pooling up beside his head.

Every openly gay man probably has long heard of such stories. Certainly in the late 1960s when I was active in the New York City gay scene, I heard time and again such tales of how a simple sexual encounter turned murderous the moment the act came to an end, legendary stories of how a friend of the teller’s had been picked up for sex never to be seen again, or, surely a common urban legend, how a stranger involved in fellatio suddenly bit off the man’s penis the second the sperm began to well up. And we all later read of the repulsive perversions of the Milwaukee madman, Jeffrey Dalmer, who killed and sometimes ate parts of the bodies of 17 boys and men from 1978 to his capture in 1991.

These ominous warnings were part and parcel of living in a hostile environment wherein homophobia was a natural result of the culture’s general fear and even terror of gay men and the growing LGBTQ community as whole. But to see it so lucidly laid out in Norvalls film came as something of a shock. As commentator Ivan Kander writes:

“With one location, two characters, and minimum dialogue, Norvalls crafts an undeniably engaging scene that exposes its protagonist to his bare core, both literally and figuratively. ...In other words, it’s a character drama about sexuality, repression, and identity that essentially feels like a suspense film. Quite simply: it’s tough to look away from.”

As Norvalls himself described his response to an international short [movie] challenge that asked its participants to interpret the theme “naked”:  “I came to the realization that naked for me meant to be caught in a lie or have a secret revealed, when others knew what I did not want them to know.”

It’s the “not wanting” others to know that leads to the swimmer’s attempt to blot out the very existence of the evidence, in this case a human being simply enjoying the pleasures of his penis.