When I started the immense project of My Queer Cinema I have to admit that I was rather naïve, presuming as I did that there would be several hundred LGBTQ movies over the last decade and a half, from which I might select my favorites or even a few of my least favorites to present a solid view of a genre that I had just begun to realize had been important to me throughout my life.

Yet, as I bravely moved forward, uncovering in the years since (and at simultaneously within) those years so brilliantly catalogued by Vito Russo in The Celluloid Closet a wide range of queer representation it became increasingly apparent that, although much had been written on LGBTQ cinema in general, we needed a more encyclopedic and expanded viewing of the thousands of films, many hidden and others who because of their niche audiences were now simply forgotten or lost.

Accordingly, films I once thought I would never have to review now seemed to be a necessary evil if I wanted to put these films into the larger context, suddenly part of a constellation of thousands of films in which the fewer films to which I had been first attracted to were created. What I was originally viewing through a monocle shifted as I took out a pair of reading glasses and, finally, attended to the lens of a telescope.

Herbert Ross’ version of Neil Simon’s California Suite was one of the dozens of films to which I might otherwise have never given a second thought—or perhaps even a first thought. Besides, I might once have argued, was this truly an LGBTQ film?

Well, you can’t have it both ways, delving into pre-1960 films that merely hint at gay, lesbian, bi-sexual, and transsexual behavior and to then ignore other heterosexual impressions of LGBTQ life would seem somewhat hypocritical. And, in the case of this particular tired mess of four shorts strung together, as was Simon’s previous but somewhat more interesting Plaza Suite, the best of the now clumsily interwoven episodes at the Beverly Hills Hotel was the shtick about the bisexual Sidney Cochran (Michael Caine) married to the British actress nominated for a slight comedic role in a Hollywood movie, Diana Barrie (Maggie Smith). But I’ll save that for last. 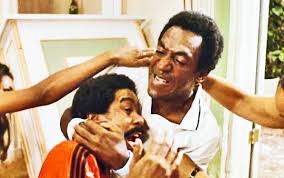 I least like the Neil Simon who occasionally forgets that his forte is one-line zingers and decides to dabble to the physical comic tradition of Hal Roach. But Roach was far better at throwing pies than Simon and Ross are in throwing punches. Not only does a story about two couples—the males sharing careers as doctors—joining up for a California vacation made in hell make utterly no sense, but even more offensive is rather racist, since this quartet consists of veteran actors Richard Pryor, Bill Cosby, Gloria Gifford, and Sheila Frazier, all blacks who in this skit can’t seem to drive a car, can’t quite get the hang of tennis, and can’t obtain the rooms they’ve booked in the posh hotel, while taking out their understandable anger upon one another by punching, slamming into, and breaking apart one another’s bodies piece by piece. Even their character names, Dr. Chauncey Gump and Dr. Willis Panama with wives named Lola and Bettina seem like something out of Amos and Andy or even worse, a lost script for a minstrel show. I can’t imagine how this might have played on the New York stage, but certainly it’s without a shred of decent humor in Ross’ rendering.

Simon regular Walter Matthau (as Marvin Michaels) this time plays against type as a sexually faithful and far more socially responsible being compared with his sexually obsessed brother, Harry (Herb Edelman) who hires a prostitute to entertain Marvin on his one night alone in Los Angeles awaiting the arrival the next day of his wife Millie (Elaine May).

Matthau is at his most loveable as a kind of sheepish, clueless miscreant as opposed to the loud-mouthed, cigar-smoking slob of The Odd Couple. And in this film he is fortunate to have as his fictional wife, Elaine May, who upon finding a hooker in her husband’s Beverly Hills Hotel bed forgives him, instead of flying into a fury, before going on a shopping spree that may empty his bank accounts. 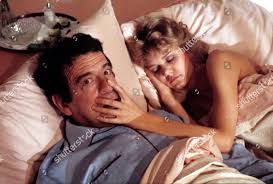 Still, this sketch is still a one-liner, dependent entirely upon the old theatrical convention of trying to find a place to hide the lover about to be discovered in flagrante delicto. Unfortunately, this dead-drunk bimbo cannot hide in a closet, under the bed, or even on the balcony, and a blanket, in this instance, does not a good cover make. Marvin has no choice but to come clean, accept the consequences of a leaner bank account, and share a taxi with the friendly prostitute on his and Millie’s way to the bar mitzvah they had flown in to attend.

The Jane Fonda-Neil Simon bond goes way back to 1967 when she starred with Robert Redford in Barefoot in the Park, and in some ways she is a model Simon ingénue, innocent even if a bit wacky in her embracement of even the oddest events in life, yet, nonetheless, intelligent and witty when the chips are down. But a lot has happened in her career since that early work, having been suspected of murder in Klute, reported on a Pennsylvania nuclear meltdown in The China Syndrome, and traipsed through Nazi territory in Julia, to say nothing of her off screen appearance as an on camera appearance of “Hanoi Hannah,” Fonda is a wiser but sadder girl. 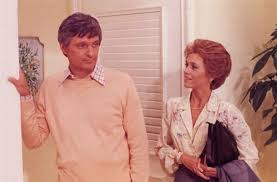 In California Suite she and Alan Alda switch roles, as he dresses up in California whites and a light pink sweater to play the straight man, Bill Warren, to her endless cynically witticisms. Yet you know you are in trouble when even the script calls on the straight man to praise the cleverness of the sour comic’s one-liners. Worse yet, Simon seems to have been channeling Woody Allen in his spew of vitriolic California put-downs. Beautiful as she is, Fonda’s Hannah Warren is so brittle that a single match might set a whole California forest afire.

She’s come to settle a million scores with one symbolic act, to retrieve her disaffected daughter who has run away to join her screenwriter father in Los Angeles. Clearly, Ross was able to convince Alda to play his character as laid-back as a Malibu maven. Since all the chips have fallen into his lap, Bill can simply sit it out, letting his ex-wife spin out her webs of fear that she may be loosing her daughter forever because of her clever ability to pin down everyone and everything with a suitable barb.

There is obviously some pathos in this, and every once in a while Simon’s suffering character hits her head on the nail so expertly you expect a bit of bloodied truth to ooze out. It does so gradually, but in the process drains away the humor upon which the tale is based. If Hannah has seemingly led the perfect life, she has ended up with an alcoholic lover dying from a heart condition, along with an endless craving for nicotine, and an empty house at the very same moment when Bill, with daily exercise and a repudiation of cigarettes and alcohol, has turned his life around.

I can only say that when a writer and director get me to actually root for Alda, I know something must have gone wrong. He actually wins the battle over who will care for their daughter, while Hannah is merely assured by the daughter that their love remains intact. Sob!

That leads us to the now chopped-up story of the bi-sexual Sidney (Caine) and his audaciously tenacious wife, Diana (Smith). Despite everyone advising him not to play a gay man, Caine comes off in California Suite as a credible bisexual, a role which must have agreed with him, since he kissed Superman (Christopher Reeves) in 1982’s Deathtrap. And god knows, even as her character admits in Simon’s script, Smith has played enough queens to certainly know one when she sees one; it’s just that this time, after she’s just lost the Oscar for which she’s been nominated, observing her increasingly indiscreet antique dealer-husband making a date with a handsome young actor to meet him in London, is something in her drunken disappointed soul she cannot quite endure. 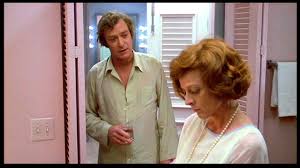 It doesn’t help that Sidney looks after her with the fussy attention of a slightly frustrated housewife and yet his witticisms always strike their targets more precisely than Diana’s despair-driven put-downs of a world to which she truly doesn’t belong. Pretending she doesn’t care about the hoopla provided her only to be whisked away immediately after the award is announced, she’s starving—quite literally it appears since she goes on a scavenger hunt of room service tray-top leftovers outside their neighbor’s suites—for attention, even if it means sex with her bisexual lover who when he obliges her generally closes his eyes.

I don’t know, but I presume truly bisexual men just might, in fact, enjoy their heterosexual encounters as much as their homosexual ones. And did Simon really have to use the cliché of antique dealer to define Sidney’s attraction to the same sex? Moreover, since this fairly long-lasting couple do truly seem to love one another, why does she appear to have so many druthers on this particular night? Yes, her ego has taken a blow. But so too it must have when she was offered the role in the trite comedic flick in which she’s just starred.

She’s aging and she fears that. We have to presume that the character Diana has no way of knowing, like the actress who played her, that she might get plumb roles as aristocrats and countesses later in life. So, we can surmise, she’s simply spilling a few tears over some spoilt semen. As soon as she gets back to London to be killed off as Desdemona she’ll be all right.

If there is a common theme throughout the four segments of California Suite, it arises from the suggestion that all of the major figures of this film are losers or would-be losers. The vacationing doctors, Gump and Panama, are surely now afraid of losing each other’s friendship. Sidney Cochran has lost, if nothing else, his marital virginity; surely he will never again be the patriarchal head of the Cochran house. Hannah Warren will continue to be terrified of losing her daughter. Diana Barrie will be equally fearful about losing her husband and her status as an actor. But profound or even truly humorous cannot describe this work.

If you’ve never quite understood the true meaning of irony, here’s a definition: for her role in this slick and mediocre comedy Maggie Smith was nominated for an Oscar. And she won.

Posted by greenintegerblog at 9:23 AM