The dominant frame of Jan Oxenberg’s 1973 work, Home Movie, is a time near the date of this short cinema depicting lesbian marches and the activities of the director and her current friends before permitting us entry into earlier images of her childhood and high school years. One of the major questions her film raises is how precisely to define home.

Is “home” best represented by the cinematic images of Oxenberg imitating the actions of her mother as the latter nurses her newborn sibling with the child mimicking those actions with her doll? The child tries hard to do the same as her mother, holding the doll as her mother does the real baby, patting it gently upon its back, feeding it a bottle as the mother feeds milk to the child. Yet, the narrator queries “I wonder why I was doing this?” challenging her pretense as a little girl. “I don’t know, I look so...normal. Just like a little girl.” After a pause she continues, “Which is really strange because I didn’t feel like a little girl.” “I was different, you know. I was a pioneer, I was in the army.”

Beyond the narrator’s voice, moreover, we do see significant differences between the mother and the would-be mime, the second, as she herself puts it, trying to fool all the others. The child, at moments, looks somewhat angry, clumsy in her actions, holding her doll and moving it with rough, jerky actions. Although constantly looking over to her mother for clues, the child is clearly not quite certain of how to do what she’s being encouraged to, and, more importantly has no indication of why. The placid look of approval which briefly crosses her mother’s face obviously explains a great deal of the young girl’s motivation.

In another early “home movie,” the child, sightly older but still dressed in a rather frilly gown, dances, a kind of wild whirl of movement, sometimes seeming to imitate the taps of Shirley Temple, but at other moments incorporating some of the techniques of a spinning ballerina. Critic Michelle Citron, writing in Jump Cut: A Review of Contemporary Media describes it:

“Her dance is extraordinary. Arms waving frenetically, the child is trying to keep her balance. Then, trying to negotiate a graceful turn, she falls on her ass. It is simultaneously funny and painful to watch. Here is Shirley Temple as performed not by a precocious child star but by a real child. The girl is trying to imitate what she thinks should be cute and feminine, but since she is real, not a male-manufactured icon, she fails at this attempt. Her dance is not graceful or coy. Rather, it's the desperate running around in a circle of a kid who doesn't quite catch on. The image resonates with our memories of trying to fit in, struggling to be those images of ‘true femininity’ presented in films, magazines and television commercials. This image symbolizes growing up female. On the sound track the woman's voice intones, ‘I never felt like a girl. They let me be crazy.’ Few of us could measure up to the ideal, unreal images, always feeling somehow crazy.”

If the would-be dancer doesn’t exactly “fall on her ass,” I would argue, she ends what was clearly meant to be an expression of gracefulness with a more ruffian somersault as if say to herself, Forget that. I’m better at the rough and tumble of life.

An important memory of her best high school friend, with whom she did not engage in a sexual relationship but shared such deeply intense feelings that it might has well been, follows, ending in further family-shot footage of her high school days as a cheerleader. 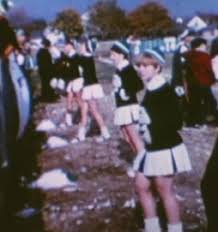 Like the former childhood attempts to accommodate the expectations of how she should behave, Oxenberg describes her knowledge of who was on the “inside”—a lesbian—being conflicted with what she was attempting to portray on the “outside” as a kind of normalcy. For her, a little like the character in Jamie Babbit’s But I’m a Cheerleader, her relationship with her fellow female cheerleaders was of far more importance than “the guys we were cheering for.” For her the football players were “just kind of irrelevant.” “It was as if the football game was just an excuse for us to get together are do our thing.”

On either side of these older home films, however, are her adult relationships with the lesbian community, at one point a lesbian group marching down the street shouting “1-3-5-9 lesbians are mighty fine,” representing another kind of cheerleading; and an all-woman football game played utterly differently from the male-on-male contact sport that often does damage of the player’s brains. The women seem hardly to care about the ball they hike and attempt to carry down to the goalposts; rather their goal is to run and leap upon one another in a kind of bacchanalian joy of touching and hugging each other. No rules here, just a joyous sense of female camaraderie ending in laughter instead of scores. 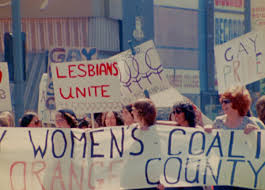 At the distant beginning and end of these amateur-made film clips are pictures of women holding hands, circling into one another, and just sharing with one another as a singer (the music is credited to Debra Quinn) joyfully performs a work with the following lyrics:

We are women. We aren’t waiting any longer

to be free. We’re not alone, we’re together.

So don’t tell us what to be.  [my own line breaks]

Finally, one realizes that these images also represent a kind of “home movie,” but a far more significant one. The home that faces the women in these images is a place where they can come together and share with one another in a manner they could never have back in their family homes, schools, or small town streets. These home movies present the women most at home in one another’s company, without having to enact how they should perform in imitation of their mothers, movies, media, and high school social mores.

Oxenberg’s film, accordingly, is structured almost like a flower, its blossom appearing on either sides as it progresses through repetition to its fragile central buds which represent the hidden insides that finally are allowed to express themselves in full bloom. The mother and the previous social restrictions delimiting them have been pushed aside for others like them defining a new space in the world: “We’re not helpless...We’ve got each other.” What was clumsy and graceless is now transformed into a powerfully new expression of the beauty of being at home.