The popular short from 2011 Half-Share was evidently made as a pilot for what appears to have been an unsold TV series, and it looks like it. Although the short uses the gay lingo of Fire Island queers, it doesn’t feature any sexual scenes except for the hero of the film, Mac (Kyle Spidle) sleeping in the same bed with his shared-room partner, Lex (Jesse Archer, the co-writer of this work), who assures Mac that they have not yet become “friends” (meaning in Fire Island speak, that they have not yet had sex). “But there’s a whole summer ahead.”

In a sense, this work is a kind of repeat of Andy Warhol’s My Hustler (without a handsome hustler laying upon the beach), Stan LaPresto’s Sticks and Stones without the pretentious hangers-on or the hippie-like leftovers circling the cadavers of the dead drunk or stoned-out natives, along with a jigger or two of Boys in the Band without the mean-spirited Michael to turn every party into a sour evening of self-detestation.

Not that there isn’t some of the leftover barbs of those works which the newcomer, Mac, having just broken up with his 14-year long lover, justifiably perceives as self and group hatred. Generally, however, except after making their way through far too many “teas” (is the Fire Island dialect, daily parties that serve a cocktail mix of liquor and drugs) and the simple cattiness with which apparently the writers of all these films assume all gay men are naturally endowed, life in the summer sun in this gay paradise—the only place in the world, as Mac is emphatically told, where queers don’t have to be normal—is a bit like Love Boat or Bay Watch just for boys. All you need to do is show up in your best pair of swimming trucks or, if it’s your thing, your loveliest drag attire and speak the proper lingo. 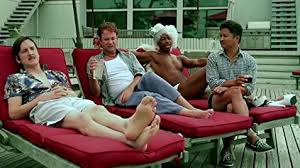 The gay couple living in the same time-shared house where most of these of the work’s characters drop exhaustedly in bed each night are named Michael Yes (Jack Plotnick), a budding celebrity in the Chelsea art world, and Michael No (Sam Pancake), a bitter alcoholic as he describes himself, who together are looking for a “thruple” (in island speak, a third permanent friend who they both can share to enhance their sexual life). Lex, a highly effeminate beauty, is a “blouse,” (in the Fire Island vernacular, a feminine “top” as opposed to a masculine “bottom”—in case you’re new to this kind of gay sprache, terms that define whether one prefers to be (fucked) or not to be (the one who receives, but rather the one who gives a good fuck). Harold (Kyle Spidle) is a black Republican lawyer who makes the best drinks on the island because he doesn’t measure but simply pours out the bottles until they are nearly empty before throwing them into the blender. 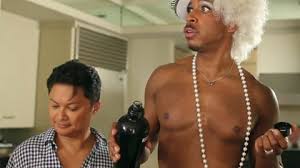 The always hilarious comedian-actor Alec Mapa plays the “house mother” Ito, who cooks up gourmet dinners each evening that are seldom eaten by a “family” who, too often, have already filled up on hors d'oeuvres (translate as cocaine).

Even on the boat over the Oregon dressed and bearded Mac regrets his decision to get over his breakup by spending a few weekends with gay friends, having evidently known Ito years before. In a call to his mother he claims his choice to spend time on Fire Island to be one of the biggest mistakes of his life “Everyone is so happy and giddy. I’m feel like I’m gonna be invaded by the bodysnatchers.” On encountering his new housemates, Mac is so self-righteous and critical of everyone that they almost are tempted to vote him off the island. But promises his emotional fragile friend that he’ll see be just fine. “Misery loves sodomy.”

When they hear, however, that Wee has kicked his one-night stand out of bed for bursting into tears, presumably from missing his former companion, Lex asks Mac to join him on a little “adventure” in which they return to the house of ill repute to do a little mischief involving a marinade and enema spilled from bed to bath. You get the idea! Juvenile humor is evidently a big thing on the island. 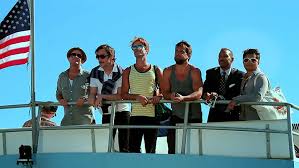 Mac grows fond of his queer (everyday speak for “odd”) new friends and throws the gift of an expensive watch his lover once gave him but now wants back, into the ocean. The past is halted and life with his magical time with the lost boys of Fire Island has apparently just begun.

I too might not have chosen to invest in this slight if somewhat charming tale trying too hard (author’s pun) to turn itself into a sit-com. When you don’t speak the lingo of such gay stereotypes it’s simply tempting to describe their happy and giddy saga as a turn off, despite the well-endowed Wee and the perfectly sculpted body of Lex.

Posted by greenintegerblog at 7:08 PM