Joel Schumacher | Man in the Mirror

the choices we make

If the two previous shorts I reviewed above bear a similarity to educational campaigns about LGBTQ difficulties and rights, the 2011 film Man in the Mirror by Joel Schumacher, with a script by Treviny Marie Colon is truly just that, a film produced by USA Scenarios who, working in US high schools with the “What’s the Real Deal” curriculum, help to express responses to such issues raised by students. Schumacher’s and teenage writer Colon’s work, however, is so professional that I felt it would be almost irresponsible for me not to include it in my vast collection of LGBTQ filmmaking.

The issue here is a common one for young secondary and, particularly, high school kids in the US, whose major heroes are the school players of various sports. And some of the issues here were explored in greater depth in the 1998 British film by Simon Shore, Get Real, in which the handsome gay hero, Steven Carter, falls in love with the school jock, John Dixon. In a scene very much like the one with which this short ends, a seemingly necessary beating of the gay boy he loves to proves his heterosexual masculinity to his bullying buddies. In Shore’s film, Dixon pretends to beat Carter behind closed doors with the latter screaming out in pain as the jock slams his fist again and again into his school pack-back.

If this situation might appear as a somewhat extreme, I might add that when I was a sophomore in high school I fell in love with the high school football team captain, Doug Reed. One night he asked if he might drive me home after drama practice, an invite from a senior to a sophomore that clearly implied sexual intentions. But I was too scared of its implications to go through with what surely might have been my outing. And had such a relationship ever gotten out to others of his 1962 teammate, it would surely have meant the end of his reign as the Prom King. And I might well have imagined just such a scene being played out, either symbolically or actually. I had already been a target by others for beatings just for the possibility of my being gay, even though I had never had a sexual encounter. 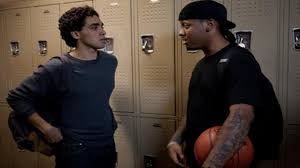 The jock in Man in the Mirror is Jason (E. J. Bonilla), a Puerto Rican basketball hero who is currently dating Ellie (Samantha Tavares) and is obviously one of the most popular boys in the school. His fellow team players, Peter (Julito McCullum) and Mike serve has his bullying attendants, the latter of whom accidently witnesses Jason’s gentle locker room encounter with the openly recognized school gay boy, Eric (Ben Newell).

Yet even before that event, Jason, who has been secretly meeting up for sexual encounters with Eric for some time, has been deeply questioning his sexuality. Often this inner probing results in sudden homophobic outbursts as when his older cousin, an openly gay man, returns from California for a short visit. When he reminds Jason of their childhood activities and invites him to go shopping (a bit of stereotyping in what otherwise is a film that for the most part escapes simplistic characterizations), Jason explodes with the hateful words “I don’t want to be hanging around with some fag,” which results in Sully (Joshua Cruz) pulling away from his formerly close friendship with Jason. 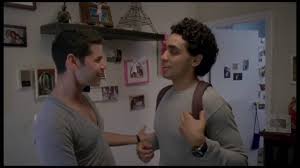 Jason, however, is internally suffering the pulls of any young gay man, particularly one who is so deeply entangled in the normative societal values. As he tells Eric, he’s being scouted every week by college agents for a chance for a scholarship, “And, honestly, what college basketball team wants a homo?”

Most importantly, although he clearly loves Eric, he refuses to describe himself as gay. When Eric attempts to tell him that he clearly is homosexual, Jason pushes it aside: “Eric, I like you a lot. But I’m not gay. And whatever this is it’s fun, okay, and it’s...it’s great. But I have a girlfriend, all right?” “Doesn’t hiding bother you?” Eric implores.

Clearly it does. Deeply pondering his situation, he comes as close as possible to coming out as he describes his situation to his open-minded sister, Michelle (Delia Cariño), who promises him that no matter what happens she will be there for him.

Yet returning to school he is met by his intolerant friends who have already been preparing the showdown in the locker room where they have captured Eric and await Jason to prove that he is truly not gay by “beating the fag out of him. What choice to you have?” 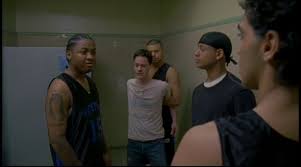 The film ends with a simple written statement, obviously the solution that these well-intentioned students and their sponsors what to express: “You always have a choice.”

One feels, however, a bit let down by the simplistic adage. The question is not really do you or do you not have a choice, but what choice do you finally make and how do you come to terms with it? In Get Real, despite being able to elude the beating, John Dixon still makes the choice to keep lying to himself about his sexuality, leaving Steven Carter to come out to the entire audience of parents and students attending the final class ceremony. Carter, we know, will get on just fine without Dixon, but Dixon sadly may have to face a life of deep denial and conjugal despair. Many years after I left my hometown, Doug Reed took a gun to his head and, as his cousin reported to me, “shot it off.”

I don’t expect that high school students should be able to provide a ready answer to the questions they have so profoundly and skillfully solicited. But it might have been interesting to explore more fully how Jason chooses to react as he stares into the face of love with the horror of seeing his whole life about to be swept into chaos. Perhaps a simple action, visually expressed early in the film, might answer this impossible dilemma. After his school mates have been making fun of Eric in the hall, he quietly asks them to stop picking on Eric, turning back to his girlfriend Ellie to plant a kiss upon her lips. She pulls him on down the hall, moving off to the right; but just before Jason leaves the camera’s view, he looks back down the hall at Eric with an expression of pained love that is so deeply felt that the viewer knows everything that Jason has not yet been able to admit almost before the film has begun.

Posted by greenintegerblog at 7:19 AM