Based on a play by the noted Canadian French-language playwright Michel Marc Bouchard, John Greyson’s adaptation of Lilies is an unusual evocation of young gay love through the lens of an old man locked away for life in prison. Moreover, the play, supposedly performed in the prison chapel by inmates, including roles for both men and women (the women being performed as well by the male prisoners), toggles back and forth between theatrically-conceived sets and  cinematically filmed scenes of realist presentations in nature and within the small Quebecois  village of  Roberval in which the story takes place. Moreover, the performative styles of the actors vary from highly artificed gestures, to a kind of mad-house theatricalism the likes of which we last witnessed in Peter Weiss’ Marat/Sade, to the campy gestures of a black man portraying a wealthy French woman. 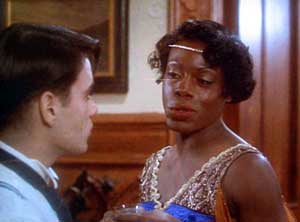 Finally, the theatrical genres Lilies embraces include highly romantic liturgical renditions of the lives of the saints, cinematic depictions of young gay boys coming of age, a picaresque-like voyage which ends in transformation, and, most importantly, and a play-within-a play. Greyson himself has described his film as a "strange Genet-inflected-via-Fellini fable.”

Accordingly, for those who can’t easily assimilate quick shifts in narrative language, theatrical genres and tropes, and a radical mix of older and newer theater conventions, Greyson’s film may at first seem like a mish mash of traditional and post-modern methods of storytelling. Despite that, however, Lilies is amazingly fluid in its numerous transformations.

Set in 1952, the play begins with the rather straight-forward arrival at the Quebec prison of the local bishop, Jean Bilodeau (Marcel Sabourin) who has agreed to hear the confession of a now elderly prisoner, Simon Doucet (Aubert Pallascio), who, sentenced for murder, is now nearing death.

Bilodeau is hoping that the long recalcitrant prisoner may have come to terms with his crime and sentence, but is startled to find many other men already sitting among the pews of the chapel outside the confessional box. And, as he enters the box to hear Doucet’s confession he is suddenly  locked in as the warden and the prisoner explain that instead of hearing a confession they intend to perform a play for him, beginning with a tableau vivant-like recounting the life of St. Sebastien,  performed in the kind of gestural and declamatory acting style of 1912, when the event originally took place. 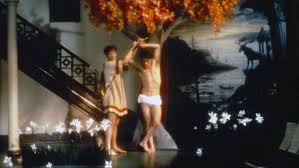 But at the same time, Simon (Jason Cadieux, as his younger version) playing Sebastian and his friend Vallier (Danny Gilmore) performing as the man ordered to shoot a arrow into the saint’s heart—who together have obviously been exploring their offstage sexual urges for some time previously—play out the Saint’s martyrdom with strong homoerotic overtones, a fact that is not unnoticed by the young Bilodeau (Matthew Ferguson) who, seeing their interchanges, is himself sexually excited. Simon and Vallier, aware of Jean Bilodeau’s unrequited love for Simon, attack him, Simon planting a long passionate kiss upon Jean’s lips. 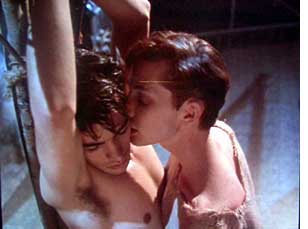 The performance and attack is observed by Vallier’s slightly dotty mother, the self-declared Countess de Tilly (Brent Carver) who—although with her son lives in a derelict shack she describes their house as a manor and refers to her husband who long abandoned her as a Count doing in business in Paris—is seemingly delighted by her son’s and Simon’s sexual kinship. She cone to ask Vallier to accompany her to the event celebrating the arrival of the French aristocrat  Lydie-Anne (Alexander Chapman) about to enter Roberval in grand style in a hot air balloon.

At the celebration, the Countess unperturbedly mentions to the elder Doucet, Simon’s father, what she has witnessed, which later results in Doucet senior brutally beating his son so badly that Simon later seeks out the help of a visiting Parisian doctor to keep the act from being shared with the entire community by the local doctor.

Clearly, his father’s homophobia has so instilled in the young Simon a dreadful fear of further abuse or even possible death that he determines to find a heterosexual mate, abandoning his lover Vallier. Into his life Lydie-Anne drops like a fairy-tale princess so taken by the boy’s beauty that they began a relationship that points toward marriage and Simon’s escape from the rugged rural world of Roberval to Paris.

The sympathetic viewer immediately perceives that the affair between the two is perverse, not only because of their vast age difference, but because of the intensity of feelings both boys still share.

The play oddly reveals this perversion in anti-gay and racist stereotypes that seem  counterintuitive to the homosexual love tale that is at the center of this piece. For, looked at from outside of the context of the drama, Lydie-Anne is a black drag queen who we cannot forget has been imprisoned for his crimes who expresses his character’s supposedly heterosexual love in an obviously swishy lisp that, if it were not so mimetically cloaked—actor Chapman brilliantly plays his role completely straight-faced, without even a wink—we might simply dismiss it as camp.

Understandably, Vallier has not been invited to Simon’s and Lydie-Ann’s engagement party to be held the night before they fly away to Paris in the latter’s balloon. Yet Vallier’s mother insists he attend the event to declare his love for his life-long friend. If the party-goers are shocked by the entrance of the Countess de Tilly and her son, as Vallier begins to recite the lines of St. Sebastien role to Simon it quickly become apparent that the boys are still very much in love with one another. And despite Lydie-Ann’s intervention, revealing the truth (or perhaps lie) that she has indeed encountered the Countess’ husband in Paris with his new wife and child, suggesting that it was upon his recommendations of Roberval that led her to the town. Yet he said nothing of a wife and child. 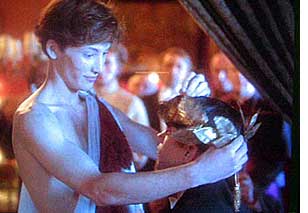 Hurt, but nonetheless still supportive and her son’s and Simon’s love (she is, accordingly, defined by the society as mad) the Countess stands up to Lydie-Ann’s assertions, to the hoots of horror emanating from Simon’s father, and to the community leaders gathered at the event. Simon  shall remain with Vallier the next morning to celebrate her son’s birthday in the bathtub which she has reclaimed from a garbage heap and brought to their shack. The sexual encounter between the two boys played out in the water of the tub suggests fluids their mouths and cocks share and emanate, symbolically representing a kind of marriage ceremony that could never be so beautifully expressed in the heterosexual ceremony Lydie-Ann had imagined.

For the Countess there is only one more task to be enacted: her own trip to Paris symbolized by her death. Having chosen a deeply moss-covered tree for her grave, she demands that her son live up to his familial vows by strangling her. Strangely, this truly perverse act, a murder of sorts, seems almost natural and inevitable given her desires and circumstance.

Following the trio into the woods, however, Bilodeau observes her strangulation and the boy’s sexual embraces after, and threatens to report them to the police if Simon will not becomes his lover.

Virulently rejected, Bilodeau sets the bell tower room, in which Simon and Vallier remain, afire, eventually notifying the school’s staff and the police. With the door locked by their adversary and without windows for escape or ventilation, the boys soon loose consciousness in the smoke. With some regret, Bilodeau returns, pulling Simon to safety but leaving Vallier behind to die. 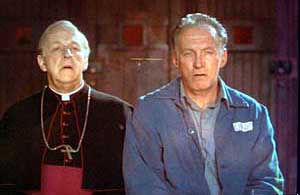 So, we discover, the death of Vallier is the reason why Simon is still locked behind bars. And, as the play comes to an end, it is Bilodeau who is forced to confess to Simon, the reversal of what he had imagined might take place.

In a short epilogue to the play, the now elder prisoner Simon Doucet confronts the criminal Bishop alone in order to ask a question that has obviously always haunted him. Was Vallier still alive when Doucet was pulled to safety? Bilodeau, nodding yes, now asks not only for forgiveness but entreats Doucet to kill him in revenge. Doucet’s refusal to do so leaves the Bishop to live out his guilt within the frame of hypocrisy for the rest of his life.*

*One might add, that without the original playwright or the director of this film version of the work needing to say anything, the Bishop’s long ago murder for the rejection of his love resonates with our recognition of the thousands of young boys who have suffered sexual abuse from the hands of church elders throughout the years. The film suggest that it is not the homosexuality that was the crime of so many priests and church leaders, but their imposition of their love upon the innocent and unwilling that society cannot forgive. Their crime may not be a physical murder as in the Bishop’s case, but was a spiritual one that destroyed the trust and belief their victims had assumed.