Mark Christopher’s short film of 1995, Alkali, Iowa begins in a field of corn with the central character, Jack Gudmanson (J. D. Cerna) digging something up. It is, in fact, a remnant of the past, from the old house in which previous generations of his family once lived, and which the young man’s grandfather (Ed Seamon) inexplicably burned down in the 1960s.

Evidently, Jack has been long searching on this part of the field when his autocratic grandfather is not watching. Jack even offers some of his finds, mostly the ones of gold or silver (i.e. metal containers, etc.) to his younger sister Carol (Ellen Latzen). It’s clear that what he is seeking is not objects of financial value but of personal significance. 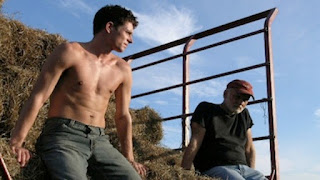 Why, he later asks his mother June (Mary Beth Hurt) did his grandfather burn down the empty house where the family once lived? Her suggestion is that it evidently attracted local young lovers and others who used it for hideaways. He wonders whether she and his now deceased father had hung out there at times, but doesn’t receive an answer.

Meanwhile, the continual appearance of a strange man who almost daily drives up to the edge of their property and lays out a picnic lunch for himself, seemingly toasting his champagne in the direction of the working farmers, almost as if he were taunting them, clearly angers the older man. He calls the picnicking Roger, “Blondie” because of his platinum-dyed hair.

The grandfather interrogates his grandson as to whether or not he has ever spoken to the intruder, to which Jack replies, rather defensively, that he has no reason to talk to him. It’s clear that the grandfather sees the stranger as a dangerous figure, worthy of bringing out his shotgun to scare him off, action he takes the second time “Blondie” appears during the course of the film.

Moreover, these Iowa farmers, young and older, seem to hide other secrets similar to the years-ago destruction of their old homestead. Jack seems to be collecting photographs of the past in an unknown attempt to piece together a time about which he is told extraordinarily little. 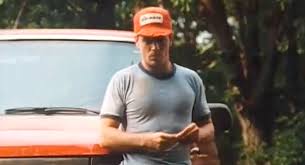 More importantly, we observe Jack get into his car and drive a few miles away to a grove, lined with some picnic tables. Suddenly, we recognize that the spot is a hide-out for local gay men, farmers mostly. In the woods around and in a local bathroom they appear to meet up for sex. Surely Jack is a handsome regular to this bunch of rugged men, desperate for a little companionship.

I have to say that this scene had great significance for me. Having grown up in a more urban Iowa, I never bothered to wonder if there might be anything like gay farmers, and if there were, that they might have their own secret meeting places. Christopher’s short film, accordingly, takes us into a world we might never have imagined.

The day after these events, Jack, in the presence of his sister, digs up something near the same spot of far more significance, a metal box. Since it’s silver, Carol claims it, but Jack, once he has peaked inside to see the contents, will not give it up. And that afternoon, while his grandfather is working in a far field, he enters the older man’s bedroom to discover a strange Hawaiian record which seems totally out of place in his grandfather’s restrictive world.

On the back of one of the photographs he also has discovered in the metal container which looks somewhat like a silver lunch box, is the written name “Jacko.” a pet name, apparently, for his father, he has never heard his mother express. The record has been signed, as a gift, to the same nickname. 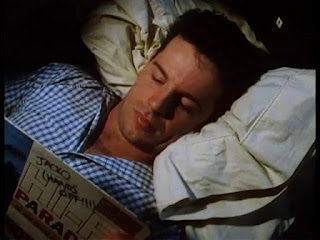 Clearly the Hawaiian record harks back to another time perhaps when his father was in the navy, and several of the photographs show his father dressed in military attire. We have to assume that his father may have died in the war, or at least kept up with his navy friends after.

In this sense, Christopher’s short film is not a trove of answers to the riddles with which the movie presents us, but is, rather, a series of unanswered clues to what we obliquely observe: his grandfather’s bitterness and violence against “Blondie,” his mother’s vagueness about her and her husband’s relationship. The two children, whose father has apparently died early in their childhoods, are quite literally on a treasure hunt, Carol for shiny objects, Jack for untold stories and, we gradually perceive, evidence.

Evidence of what he is seeking, we are not quite certain until he returns to the country male pic-up spot, where “Blondie,” in fear of further attack, attempts to race off in his car the moment he sees the young man. Jack, however, simply apologies about his grandfather’s actions. “You knew my father?” he gently asks. The man shakes his head yes. “Was he, was he like us?” Jack almost stutters out the question the bits of information have led him to. “Yes,” says “Blondie” before getting into his car to drive off.

To my knowledge there is no Alkali, Iowa. And it is still difficult for me to comprehend that some few of my large family of Iowa farmers might have been gay and found such isolated spots as portrayed in this film, to satisfy their desires. In a sense, Alkali, Iowa is related to movies such as Monte Patterson’s 2010 movie “Caught,” wherein small town Ohio gay men gather in a bathroom facility in a rural public park nearby, tracked by police on hidden cameras. Both films take us to territories we might never have expected, in our close-minded attitudes toward to LGBTQ activity, to find homosexuals.

This film demonstrates, in a sense, the truth of a litmus test: alkali is a chemical compound that neutralizes or effervesces with acids, turning litmus paper blue. Forgetting any political associations, it is interesting to recall that gays were often described in some societies, and still are in Russia, as “blues.” Here, their actions truly counteract or even animate the narrow homophobic anger of those, like Jack’s grandfather, who live amongst them.

If Jack’s life may be forever closeted on the farm he works, he is, perhaps like his father, open to others in the local community to more ebullient forms of love.

Posted by greenintegerblog at 2:20 PM