In 1991, after having recently been diagnosed with AIDS, African-American filmmaker Marlon T. Riggs composed a 9 minute experimental music-video to celebrate black gay America. Using a collage of images such as the US flag, the Pan-African, black, red, and green striped flag, the pink triangle symbolizing ACT UP (AIDS Coalition to Unleash Power), a rose, a studded cock-ring, and a short clip of two nude African-American men kissing among other evocative symbols, Riggs creates a landscape that parallels the musical and poetic phrases he has chosen to argue for the potency of the black homosexual experience. 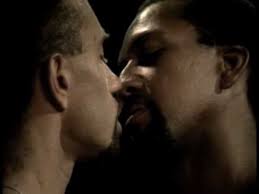 The director begins with lines from Colin Robinson’s “Epiphany” arguing that gay blacks must “Parade it proudly” and “Pervert the language”—lines repeated several times—to which, when the recurring image of the men kissing, alternates with a Donald Woods quotation from his “What Do I Do About You?: “Every time we kiss”; followed by Robinson’s “Thrust worn, gritty fingers in my mouth.”

The repeated scenes of an open rose petal, a cross, and the metal cock ring finally give way to rows of memorial candles, as a voice asks, “Are you scared” “Are you safe?”

At the heart of the work is Washington, D.C. poet Essex Hemphill, who died of AIDS four years after this short work, reading his entire poem “American Wedding,” the first stanza of which sings: 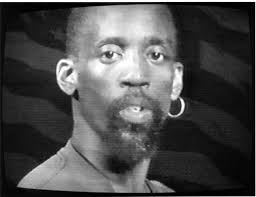 I place my ring

no soldiers of doom

and sweep us apart.

we need each other

They expect us to call in sick,

die by our own hands.

we are becoming powerful.

Every time we kiss

we confirm the new world coming.

The poem in its entirely is followed by image of an unfurling US flag, with the artist Blackberri singing "America the Beautiful," followed by a voice quoting Langston Hughes’ lines: “I, too. sing America.”

The images coalesce, break apart, and reconstruct, with bits and pieces of poems by not only Hemphill, Robinson, and Woods, but Reginald Jackson and Steve Langley. 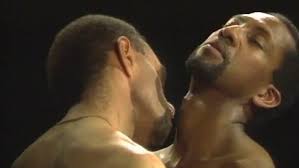 While in some respects the work as a whole is a proud statement to the entire nation of black gay sexuality, it is also a plea for the Black nationalist groups to stop excluding homosexuals of color. Riggs had long attacked the basically heterosexually-aligned Black Power groups as not only ignoring black gays and lesbians, but of employing caricatures of queer black figures that had their roots in images of Uncle Tom and other white minstrel figures. Instead of the notion of gay and lesbian figures representing brute passion, Riggs movingly argues in this document for the perception of black non-normative sexual men and women as representing the macho masculine and feminine African warriors, represented through brief clips of Africans dancing in traditional attire and the use of the music based on the beats of African drummers.

Although Riggs’ uses some hip-hop music in his video, he had in the past also criticized some rap artists as perpetuating gay black stereotypes.

On April 5, 1994, just 3 years after making Anthem, the director of the transformative film Tongues Untied died of AIDS at the age of 37.

Posted by greenintegerblog at 6:27 AM