One has to wonder whatever happened to filmmaker Paul Donagy, or for that matter whatever happened to his charming, if inconsequential 1999 gay film, Story of a Bad Boy? Although it is now available for viewing on Amazon Prime, it was evidently extremely difficult to even view copy in the USA for many years after its release. There is not even a Wikipedia entry, and apparently there have been no archived reviews, with only a couple of brief synopses. Even if this Story of a Bad Boy is sometimes a superficial, yet another “coming of age” movie, it’s far superior to some  in its genre that continue to be touted as popular entertainments for LGBTQ or curious open-minded teenagers. One commentator described it, rather appropriately I think, as “the horny cousin” to David Moreton’s Edge of Seventeen of a year earlier. 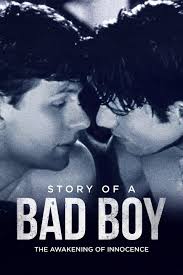 If the 17-year old of Donagy’s film, Pauly (Jeremy Hollingworth), is seemingly “hornier” than Moreton’s character, it is because Edge of Seventeen is far more honest about portraying sex. Donagy’s cute, doe-eyed kid is ready for everything (“I want some day to do everything” is his creed), for much of the film he doesn’t have much opportunity to do anything. His confused and always exhausted parents, Spryos (Stephen Lang) and Elaine (Julie Kavner)—who besides their worrisome teenager have a young baby to care for—have permitted him to change religions, from Greek Orthodox to Roman Catholic, without a clue that his inexplicable switch has mostly to do with Pauly’s attraction to an Irish altar boy, whom he soon discovers through his masturbatory voyeurism, is interested only in girls.

When Pauly’s “pretend” girlfriend—always a necessary accessory in films about budding gay boys—suggests he change back to public school for his senior year, he demands his folks allow  him yet another alteration in his life. Troubled by what they can only describe as his “weird” behavior, they argue instead he try basketball, playing the age-old parental game of “wait and see” regarding his newest reversion. Showing absolutely no interest in throwing a ball into hoops,  Pauly assures his expulsion from Catholic School by kissing a nun. As an aside: Story of a Bad Boy may be the first film to show a gay teenager kiss more girls than boys in the process of coming out.

At the new school he immediately is befriended by a popular black girl, Carla (Cherelle Cargill), a wacky clarinetist, Ludmilla (Lauren Ward), and a male punk-like audio-visual technician and  school wrestler—all who try to convince him, along with his friend Colin, to seek out extra credits by engaging in anything but the “faggety” drama club.

Ludmilla would have him try-out as the band’s drum major, a position overseen by a closeted older gay man, Mr. Fontaine (Gerry Becker). Carla and Colin argue for any sports activity, particularly track. The AV tech wrestler prefers to wrestle naked at home with Pauly in bed. Given his mantra of “try everything,” Pauly passively attempts to balance all their demands—that is until he gets a glimpse of this year’s drama teacher, Noel (Christian Camargo), a student teacher who, as a sophomore in college is just a couple of years older than the eager Pauly. 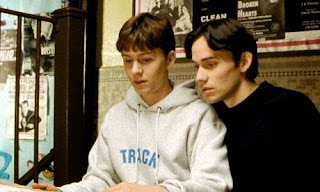 There are a lot of reasons for the handsome Noel to be, as Pauly’s mother later describes him, so “sad-eyed.” For one, is has few of the natural qualifications of becoming a good teacher, since, as we soon discover, he talks mostly about himself. And, perhaps more importantly he has all the sophomoric pretensions of a young collegiate would-be director. Under the sponsorship of Mr. Fontaine, Noel has been brought to the school to produce his musical version of Nathaniel Hawthorne’s The Scarlet Letter, “A,” the role of Hester going to Marta, the school’s “Miss Body,” singing that international hit song:

A is for adulteress

And archetype and are

A is for Antigone

For anarchy, for angst

And every day in every way....

Even The Producers would not have been so unlucky to save this turkey. But Pauly is so enamored of his new teacher—whose bed he has now shared and to whom he has provided more  sound advice than his slightly elder friend has proffered—that can see no flaws in the work nor in the character of his lover. Even after removing Noel’s school ring that has somehow been implanted during sex in his butt, Pauly can’t truly see what a pain in the ass Noel really is. 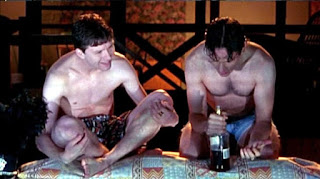 With parents as clueless as his are, Pauly like so many young people, empathically declaims the empty truisms that every failed creator loves to hear: “They think they know. They don’t get it.” But these obviously won’t alter the fact that Noel has failed as a teacher and, soon after, told that he must return to attend to his studies at school. He’s certainly not ready for the big time of local high school yet, nor is he able to sustain the magical relationship between him and Pauly the younger boy’s imagination has cooked up. They will not be moving, as Noel suggested they might, into a teacher dorm, not a “dorm-dorm” which Noel had promised, particularly after he quite literally disappears from Pauly’s life.

On a previous date, Pauly and Noel, dining at an Interstate highway restaurant—presumably a safe haven Noel has chosen so that they might not be recognized—they run into a former friend of Noel, Guy, a rather flamboyant gay man living presumably in New York, who leaves Noel his telephone number, which when left behind, Pauly pockets.

Without Noel and seemingly anyone else with whom he can commiserate, the would-be bad boy calls Guy and invites himself to a wild party. Meeting the young boy without memory of the context, Guy calls up his fashionista friends to remake Pauly up for a weekend of endless drinking, drugs, and sex—although by the time they get to the latter it seems more like an orgy out of Jack Smith, the in-drag and drugged out participants mostly rolling around in the skivvies as they hug and kiss one another—that inevitably lands Pauly in a hospital, tended to by friends, his now awakened and forgiving parents, and a spacey therapist that makes Ken Kesey’s Nurse Ratched look like Florence Nightingale. Handing him a sequined arrangement of plastic flowers and what looks to be a swan, she asks, like it were a Rorshach test, what it reminds him of. He quietly answers,  he likes it, he likes its shape. “Yes?” she leans forward as hoping to glean some profound insight into his attraction to gay beauty. It gives me pleasure, he admits. “Pleasure is rare. Pleasure is complicated. But pleasure is good.”

By the time he’s freed from lockup, he’s too late to claim a graduation gown, that is until the popular Carla decides to break away from her normative crowd (“The next time you see me, I could be less popular”), handing over her white robe (the males are dressed in dark blue) which Pauly proudly wears to the graduation ceremony which finally brings his parents out from their homelife hibernation. As it begins to rain, the camera pans away from the small crowd gathered after the ceremonies to capture Marta exiting from the back of the building to join Noel in his car as they speed off into the future. Noel opts obviously to attempt to live out his life as an unhappy closeted man, restating what we long ago perceived even while the innocent hero of this tale, Pauly, could not: he is a fraud.

Pauly’s father has provided him with money to buy tickets to the Poconos where, he suggests, his son might be able to pursue his painterly activities with other family members who plan to retire for the summer to Water Mountain. Although he purchases the tickets to Water Mountain, his eyes catch the departure of another bus to New York.

A few minutes later when the bus pulls away, we see his white robe laying on the concrete as that bus to New York moves out of the frame, a bus which evidently the boy who wanted to experience everything has embarked.

Donagy’s alternatively loud and quiet film, with equal parts of farce and wit, may not be a profound film, but it’s certainly not worth having been entirely ignored as seems to have been. If nothing else, it certainly represents an entertaining hour and a half. View it, I argue, for what it is.