Irish director Zac Goold’s 2020 short, Out is a one-line “joke” that keeps getting delayed in being told by a team of impatient and seemingly caring parents terrified by the fact that their son has called them together so that they might talk. 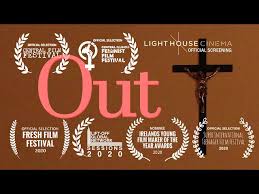 Unless one is, as are his mother and father, a religious zealot who has never even imagined  laying eyes on a homosexual being, the moviegoer immediately perceives that the young man, Ben (Archer Bradshaw)—facing his parents as they sip upon coffee or tea from that cups that read “daffodil” and “pansy”—is about to announce that he is gay.

If we easily foretell it, his dear da and ma keep imagining their own alternative perceptions of what he is about to announce. His father’s (Carl Nuzum) emphatic query: “It’s not the drink, Ben?” to which their son’s denial is quickly overwhelmed by their mutual recounting of other neighbors and friends who have had such problems with their alcoholic sons, followed by sentences such as “They got him the help he needed,” “We can help you,” etc.

Finally, Ben’s insistence that “It’s not the drink” seemingly puts them back on track to possibly listen to the confessions he’s been attempting to express. “What is it then/” asks his mother Alice (Janet Little).

“Is it about girls?” asks David, the father.

“Are you dating someone?” his mother wonders.

“Oh, Jesus Christ almighty” Alice wails as if having just been told that someone close to her has died.

When Ben assures them that he’s not been masturbating—a strange white lie, it appears to me, at the very moment he is about to confess something far more startling to their sensibilities—his mother even more oddly adds, almost as in relief, “We should be able to see that.”

Ben, nearly as confused as the viewer is, ponders if they might be electronically surveilling him.

His mother reaches up and pulls down the large family Bible, thumping it upon the table before him with loud bang:  “Matthew 5, 30. If thy right hand offend thee, cut it off, and cast it from thee.....” I think we can safely say we would have noticed, she reckons, if you’d been doing something like that.

At that point one might imagine that any normal human being might have abandoned his original intention, but Ben still soldiers on, the parental interruptions continuing (“What did you want to tell us then sweetie?”  “You can tell us anything, it’s okay.”) as he seeks to finally find the fortitude to tell these logomaniac monsters the truth.

“We love you and we support you,” enjoins the other.

By this time in the picture we feel that if there is any truth to psychological explanations for queer behavior, we have been shown all the evidence possible for Ben’s aversion to normative behavior.

Once more, Alice slaps the Bible to the table and reads out a passage, while her son finally almost painfully whimpers: “I’m gay. I like boys.”

The room in which he sits suddenly grows absolutely silent, utterly hushed for the first time since the parents have entered into the cinematic frame.

“Is anyone going to say anything?” Ben eventually pleads.

It might be interesting to compare this work with the short of 2015 by Mexican-American director Alejandro Ibarra’s, Safe and Sound, which begins with a scene that might lead us to suspect that its central character is about to make the same confession only to completely invert our presumptions with a far more problematic announcement to his family that allows for a far deeper resonance.

I don’t think we can read Goold’s 5.23 minute work as a realist text, but rather simply recognize it as being what I suggested in the first line of this review: a comic routine. If there had ever been a gay vaudeville, this might have been one of its most beloved skits.

Posted by greenintegerblog at 2:59 PM