the long and short of it

The French film of 1910, Tom Pouce suit une femme, literally in English, “Tom Thumb Courts a Woman,” but titled variously in English as Tom Thumb in Love and Mary Long and Tommy Short, is perhaps better thought of as a cartoon with living beings as opposed to describing it even as a comic one-reeler. 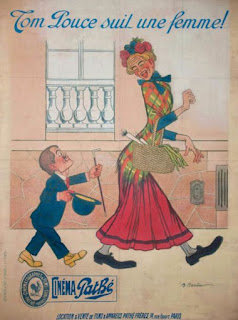 Indeed, the theater poster for this 3 minute work perfectly captures the nature of the film in which we first observe the little person, Tom (actor unknown) is seen following the tall transvestite (whose name also remains unknown) who is obviously highly displeased by his attentions, as she turns several times in an attempt to rid herself of his attentions.

When she finally enters her apartment building, he turns to the camera undeterred by her rejections, effectively expressing his sentiments that she is just his kind of girl.

Without any difficulties, he suddenly appears in her kitchen where he obviously spiels a series of loving compliments about her beauty to which she quickly succumbs, if only momentarily. She bats her large eyes and nearly swoons with pleasure.

But this is the type of woman who doesn’t sit for long, as she soon stands and goes about her business, joyfully interacting with his continued attempts to woo her with long legged-kicks and awkward flourishes of her arms, most of which hit home with the small courtier who is knocked to the floor on numerous occasions.

At moments he escapes for safety under her dining table, only to reappear to deliver new adulations of her beauty, all quite hilarious given the absolute grotesquery of her appearance. Indeed, this figure looks remarkably similar in her face to the famed female impersonator Gilbert Saroni and this work is certainly in the mode of his “Old Maid” series of the previous decade.

While Tom continues to spout sweet pleasantries, “Mary” increasingly grows impatient, kicking and hitting her suitor with greater frequency as he again cowers under the table and, at one point, escapes the apartment, only to miraculously return.

Finally, determining to have no more of his apparently inane appreciations she pulls him atop her table, wraps him up in the tablecloth and deposits Tom like a piece of garbage out the window.

We see Tom below on the street, having survived the fall, brushing himself off and puffing himself up with renewed dignity, briskly walking off. 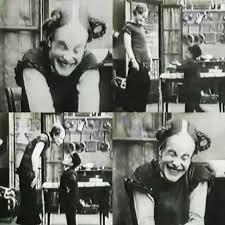 The camera returns to the kitchen where we observe the harridan finally sitting, as she almost literally laughs “her head off.”

Although this film is attributed to A. Barrere, he may have contributed only the cinema poster. Adrien Barrère (1874-1931) was well known throughout the Belle Époque as a poster artist and painter, who collaborated several times with the Pathé brothers film studio—who made this film—including a famed poster, “Tous y mènent leurs efants.” In a 1912 issue of Le Courrier Cinématographique he was described as “Pathé's man of the hour and designer of more than two hundred posters of unfettered verve and imagination.” It could well be that his poster generated the idea for the film while someone else connected to the studio actualized it.

Posted by greenintegerblog at 3:54 AM