These two short film clips from 1900 are possibly related, as one commentator, popegrutch writing for the fascinating Century Film Project, suggests they may represent an all-female dance troupe in Paris that was accepted at the time for its somewhat transgressive balletic actions. 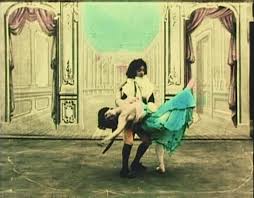 In At the Floral Ball the scene gets particularly “steamy” as the two women dance, one in a low-cut dress and the other in 18th century male clothing (described in the credits as Miss Lally and Miss Julyett of the Olympia). In this hand-tinted, 2-minute clip, the woman in a long light-blue gown leaps forward into the arms of the second woman in reddish-brown tights, later moving around her several times, spinning and dipping in a manner that does not represent true balletic positions. At several points, the woman in the blue gown reveals a great deal of her naked leg and thigh.

The male-female kisses the other’s hand, the woman in the blue dress retiring to a chair to fan herself as if overheated by her lover’s attentions, he also fanning her with her/his coattails. The male figure moves toward her, siting on the spindle of the chair as she/he kisses her hand once more, following her/his smooches up her arm to her elbow and just beyond before the screen goes black.

The second 2-minute clip, Pierrette’s Escapades, is more narrative-oriented as it plays out a pattern of the Harlequin tradition. Again the short is hand-tinted, the central dancer dressed in a pink gown, as she moves to her dresser to briefly apply her powder just as a clown in white, also apparently a female, enters, attempting to steal a kiss from her. The lady resists—although momentarily toying with her/him as she kisses the air in return—before finally sending the clown on her/his way. 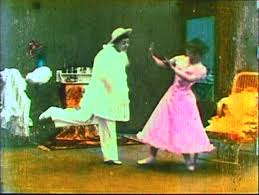 She returns to her bedroom preparations, miming the actions until suddenly a new clown, another female, in green tights with a yellow bicorne hat appears by her side, moving with her into a full dance consisting of several pirouettes, spins, and short skips before the colorful Pierrot awards her a final kiss on the lips. 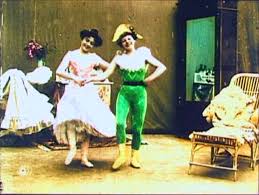 Although Pierrot is generally a sad clown as was the clip’s figure in white, this “Pierrette,” the female version of the traditional figure, is clearly joyful, celebrating his love with his Columbine.

Perhaps the audiences of the days recognized these all-female performances as far less shocking than if they had been performed by a mixed gender cast. Certainly, it might have been shocking to have the woman in At the Floral Ball reveal her full naked leg and thigh to a male partner in this Edwardian-era piece.

Posted by greenintegerblog at 3:58 AM