Dance and LGBTQ filmmaking often go hand-in-hand. From the transformation of military exercises into dance in Claire Denis’ masterful Beau travail (1999), to representations of eager young gay dancers in works such as A Chorus Line (1985) and Billy Eliot (2000), biographical works of major dancer’s lives like Herbert Ross’ Nijinksy (1980), Ralph Fiennes’ The White Crow [on Nureyev] (2018) and Levin Aiken’s And Then We Danced [on the Georgian dancer Merab] (2019), movies about dance such as Alan Brown’s Five Dances (2013) to, finally, queer group dance celebrations such as those in The Rocky Horror Picture Show (1975), Macho Dancer (1988), and Deadma Walking (2017) dance and the queer experience have quite often shared the stage. But never until a few moments ago had I have ever seen a gay short film, only 5 minutes in this case, represent a gay dance under water!

But that is precisely what director Andrew Abrahams presents to us in his 1999 work, Casualty. 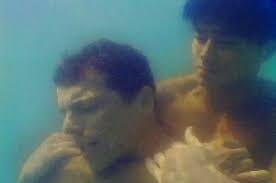 Featuring two underwater figures, Eric Newton and Hogan Vando, the movie shows first one approaching from stage left, reaching for a rose that suddenly appears to float before him; above we can see the reflection of a row of erect Cypress trees. He smells the rose as another male approaches from the right. The first embraces the other around the neck. Or is he chocking him? As the second pulls away, the first grabs his wrist, as he reciprocates. Or is he now grabbing the wrist of the first in order to pull away? 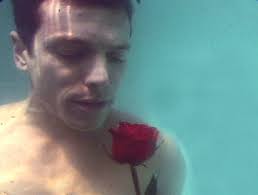 The second swimmer now has the rose in hand, lifting it to his nose as if to smell it. But in the very next instant, we see the rose floating in the water alone, the swimmers both having gone their separate ways. As the accompanying description of this short asks on the Open Eye Pictures site, where it can be see for free, “Comfort or conflict? A gift or deception? ...This mythic and dreamlike piece highlights the unraveling of an intimate relationship.”

This water dance reminds me a great deal of the dance in artist Robert Longo’s performance piece, Empire, in which one cannot tell whether the two male dancers are engaged in a series of loving embraces or are wrestling in mortal combat.

Abrahams’ work was an official selection of the Planet Out Short Movie Awards, the Breck Film Festival that occurs annually in Breckinridge, Colorado, and the Queens Museum of Art Film Series.

The film was later included with nine other gay dance works in Courts mais Gay: Tome 3, released in France in May 2002.

Posted by greenintegerblog at 7:25 AM