the bigamist, or dickens and mozart play “spin the bottle”

I’m not very fond of ranking films or making sweeping statements that pit the many wonderful cinematic works I’ve witnessed against each other: yet I have to admit that Bill Sherwood’s Parting Glances is one of my very favorite LGBTQ movies, not only of its decade but of all time. In its loosely focused vision of an era early on in the AIDS crisis and its exuberant overlay of various genres and its larger lenses of comedy and drama, of sentimental realism and a cynical surrealism, of monogamous relationships and hedonistic gay sex, and of intense living and graceful dying Sherwood’s narrative almost inevitably frays at its edges but is strengthened by its very refusal to tie all its ends into a nice tidy package. People come and go, dart back and fade out simultaneously in this fairly honest portrait of what it was to be joyfully alive in the dark days of the early 1980s—not so vastly different from our COVID-ridden days of 2020, wherein then President of the US, Ronald Reagan, attempted to ignore and deny everything going on around him. This work is almost Dickensian in its embracement of the best and worst of its time.

Proof of what I’ve just expressed may come in my realization that if I were simply to relate the plot of this work, it would make absolutely no sense. How do you explain a perfectly happy gay couple in their 20s living in New York City, Robert (John Bolger) working as a health administrator and Michael (Richard Ganoung), a freelance editor would-be writer whose relationship is about to be torn asunder by Robert’s willing—we eventually discover—assignment to two years in Africa. Life with his lover for this blow-up like model for good health and the body beautiful, it nonsensically argues, has become too easy and predictable, and accordingly a bit boring. 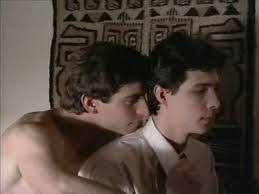 Michael, on the other hand, doesn’t see it that way at all, particularly since he is caring for his former lover, who, quite the opposite of Robert, is a holy mess of contradictions: Nick (the marvelous Steve Buscemi) is a slightly elfin, ill-proportioned yet irresistibly adorable man, dying of AIDS, who would verbally chop you at the knees if you described him just as I have. A successful rock musician who loves the opera albums, mostly Mozart, Michael buys for him, Nick lives in a messy sprawl of derelict objects, including a entire wall of TV screens and other recording devices, alternating his precious time by working on his musical compositions for his traveling band and creating tape-recordings of his last will and testament, notifying his friends and family of the money—with which he is well endowed through the success of his recordings—he plans to leave or refuse them.

His ratty, darkened, cock-roach infested apartment is the polar opposite of Michael and Robert’s sun-drenched pre-Ikea haven. And those oppositions spill over to Nick’s behavior and personality. If Robert, to express the film further in Dickensian terms, is Scrooge’s handsome nephew Fred of The Christmas Carol, Nick, is the Tiny Tim of the work—even though at moments he alternates as Scrooge, at one point in the film being visited in his waking-sleep by the specter of an old friend who warns him of what’s in store if he doesn’t change his ways.

Yet if Parting Glances is Dickensian in its narrative thrust, it is Mozartian in its tone—an important element in this film given the fact that Sherwood was once a classical music student of composer Elliott Carter. As The Washington Post critic Michael Wilmington astutely observed:

“The whole movie is keyed to its musical underscoring (from disco to opera, Bronski Beat to Brahms) and, as you might guess, the music helps shape the story. The tone is slightly Mozartean: You’re reminded a little of The Marriage of Figaro seen through the prism of the Requiem, a mixture of deep sorrow and brilliant melody. (At one time, Sherwood throws in a gag nightmare inspired by Amadeus [the same scene I interpreted as an interpolation of Dickens].)”

If Nick is the suffering Tiny Tim in Dickensland, he is perhaps Papageno in the Mozart world, the failed birdcatcher who nonetheless wins the prize of a faithful wife. In this case, the faithful wife is Michael, who, we realize, despite his desire for a permanent relationship with Robert, is still deeply in love with his ex-companion, Nick. 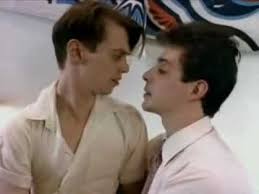 Indeed, nearly everyone in this work loves Michael, the man trapped in between losing his two lovers, past and present. The young cute record store clerk, Peter (Adam Nathan) and his long time lesbian artist friend Joan (Kathy Kinney) are nearly desperate for his company, and his other friends still can’t comprehend why he has settled down with the walking, talking ad for Gentlemen’s Quarterly. Since suddenly Robert is leaving him and Nick is near death, who might Michael transfer his love to next? Accordingly, the real theme of this world of “parting glances” is what the future will bring.

Neither the world that Robert’s friends inhabit nor that  in which Michael’s friends live, both of which Sherwood portrays for us in the two going away parties given in Robert’s honor, seem desirable for the loving and caring “bigamist.”

Neither the world that Robert’s friends inhabit nor that  in which Michael’s friends live, both of which Sherwood portrays for us in the two going away parties given in Robert’s honor, seem desirable for the loving and caring “bigamist.” 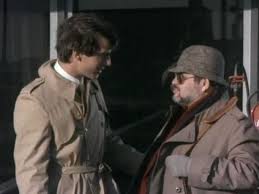 At Robert’s bosses’ dinner party, we meet the sleazy elderly Cecil (Patrick Tull) married to the ever forbearing Betty (Yolande Bavan). Cecil presents himself as a smug effete, who dines on gourmet food, drinks fine wines, and chases young boys who he pretends Betty never notices. He dotes on Robert and out of his jealousy for Michael’s relationship with him almost incessantly provokes arguments with his employee’s “roommate,” a designation he retains to keep the true nature of their relationship from his “innocent” wife, and which she, in turn, employs to pretend to her husband her ignorance. Theirs is a world of hypocrisy and lies. And we are not at all surprised later in the movie, while Robert is waiting for his plane to Africa, that Cecil shows up determined to accompany him at least to Rome, having left Betty for a final fling with young Sri Lankan men; Betty, who is the source of the couple’s wealth, admits to Michael that she is happy to have finally gotten rid of him. Is it any wonder that Michael cannot abide dinners with Robert’s associates? Without assigning literal roles to them, we certainly might still associate this power couple with Sarastro and The Queen of the Night. 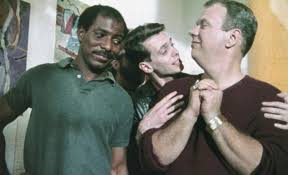 Yet Michael’s friends offer a society that is nearly as unsustainable. Joan (Kathy Kinney) may be a lovely, ballsy woman upon whom one can always rely, but hardly anyone wants the art she creates, symbolically the love she has to offer.  The invitees to her party are the societal “hanger’s on” The pompous corpulent queen and Monostatos of the event, Douglas (Richard Wall), who living off of his ill-gotten Wall Street gains, is currently writing a gay science fiction film script— explaining Michael’s current editing job—that sounds a bit like the 1982 film about alien sex monsters Liquid Sky and dozens of intentionally campy LGBTQ Sci-Fi works of the current century. The German duo of decadent performance artists Liselotte (Nada) and Klaus (Theodore Ganger) perform for the partygoers, with Liselotte later observed having sex in the shower with a young female attendee.

Peter—a Narcissus about to bud—meanwhile corners Nick to find out more about Michael, and without knowing that Nick and Michael were former lovers, declares his love for the Tanino of the night, revealing in the process his banal aspirations to become the next Great Gatsby. 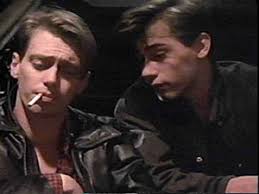 When the insensitive Peter also displays his sympathy for Nick’s having acquired AIDS, the “victim” hurriedly slinks away from the party, while Tanino goes in search of his Pamina, who, hidden away on apartment roof, has gotten soused with a female friend.

I assure you, in describing the above events, I wasn’t snorting Joan’s cocaine.

The very next morning reality returns, as Michael, angry again for Robert’s abandonment—however temporary—of their relationship accuses his lover of escaping so that he will not have to face Nick’s death, but finally returns the keys he has stolen to permit his lover’s departure.

No sooner does the now lonely Michael turn back to everyday life, attempting to edit Douglas’ horrific script, than Nick calls to report that he is “on the Island”: “Can’t take it anymore, Mike. This is it.” What “it” might mean is anyone’s guess, but obviously Michael fears for his birdcatcher’s life. He immediately books a bi-plane to fly out to save him, but the feathers he wears in this third act of Sherwood’s crazy tale, are not those of The Magic Flute but of the Indians he and Nick has portrayed in raiding Douglas’ Fire Island estate years earlier, the memory of which we have witnessed a few frames before this. So have we moved from Dickens and Mozart into boyhood games such as “Cowboys and Indians” and, as we soon shall see, “Pin the Horse on the Donkey” or “Spin the Bottle,” in which the latter, if you recall, the spinner must kiss the person to whom the bottle points. 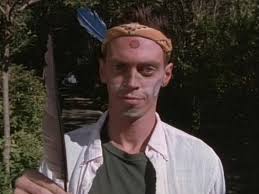 Before Michael can even board the plane to save Nick, Robert has debarked his plane, returning home to plant a kiss on the surprised Michael’s neck and—long before that possibility was imagined—to save his gay marriage. Happy as he is the reconciliation, Michael must fulfill his mission and takes off for a Fire Island trip that reverses all those many gay films that featured the fun, drugs, and sex of the summer gay paradise.

The beach in the cold light of the “off-season” is barren except for a leather-coated, denim wearing Nick; smoking a cigarette, his James Dean-like visage reminds one a bit like a winter-stranded version of Warhol’s 1965 hustler standing at water’s edge staring off into the horizon. After it’s established that he’s okay, Nick seems determined to play a geographical game, pointing outward to ask if Europe is in that direction. Michael corrects his misconception, and the game continues with Nick’s attempt to fix the direction of other continents, Africa and South America.

Nick finally demands that Michael participate in his version of “Spin the Bottle,” blindfolding and spinning Michael to point in a direction of their next journey. Michael spins, accompanied by a musical muzurka, pointing finally to Europe. Nick’s response: “Ah, Europe’s too poofy. [Putting on his sunglasses and beginning to walk away] How ‘bout we go visit Robert in Africa.” 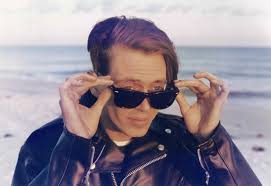 Two weeks in Africa, without Robert, might be the perfect solution to Michael’s dilemma about where his future might lead him.

So beautiful is Sherwood’s tragi-comedy that one would have loved to see what he might have accomplished later; he died of AIDS, however, in 1990.

Posted by greenintegerblog at 9:54 AM