Brian Scott [Mednick] | The Confessions of a Male Prostitute

A journalist, Nick (John Aprea) picks up a young male hustler on the street, Jamie (Jonathan Kos-Read)—a kid who looks younger than 19, the age he claims to be, and who admits he’s been a male prostitute since he was 15)—to interview him in a local restaurant. Over a hamburger and iced coffee the two simply talk in this fictional documentary shot by Brian Scott Mednick, a sometime standup comedian, novelist, and biographer of Gene Wilder and Gilda Radner. 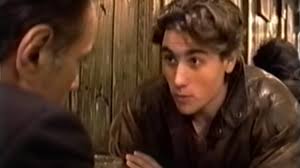 It’s hard to say what Mednick (who credited himself simply as Brian Scott in this work) is aiming at in his 17 minute short The Confessions of a Male Prostitute. The young street boy’s story is somewhat predictable. Growing up in the Bronx, the boy, living alone with his alcoholic father who physically abused him (“He threw a chair at me and broke my cheek bone, you can still see the scar; wanna see?”) and at the early age of 12 was forced to take baths with his father who sexually “messed” with him. Did he know it was wrong?

“Come on, man. What was I gonna to do? Listen, he was my dad. I didn’t know what he was doing was wrong.” But as he grew older, he learned it wasn’t right—that is was “probably illegal—which it is.” But I wasn’t going to call the cops. “He was my dad,” he repeats.

At age 15, finally, he decided he had enough and told his father so. Yet one night he was ordered to share the bath yet again. When he refused, his father grabbed him and put his head under the water. “I really thought I was going to die.”

Kicking his father in the balls, he escapes, wandering the streets for the night until, unexpectedly he was approached by a good looking man, a stockbroker, who asked how much he cost. Startled by the offer, the kid answered $200. The man, “a nice man whose wife was having a baby” Jamie soon after notes, continued with his negotiations, “no seriously, how much?” For $50 he went to a room with the stranger and so began a career in which for a few hours work each day he could bring in $100 or more. It’s hard to leave that. There’s no way out, Jamie suggests. $36,000 a year was almost a livable income in 1992.

When asked if he ever has had sex with women, the boy answers that he hasn’t, although he has a hooker friend, Helen (Dene Nardi), with whom he regularly talks. Mednick shows us a touching scene between the two in which she is excited about landing an audition-like performance of her singing talent, a moment in which the two share dreams to being able to escape the streets. He tells her he wants to attend her concert, reminding me of the sad scene from Sean Baker’s Tangerine (2015) in which one of the transsexual street workers pays to sing in an off-hours concert at a local gay bar, an event to which no one shows up except her best friend. 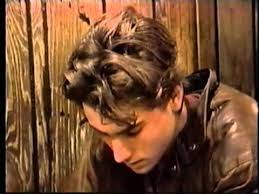 When Nick asks the boy what he sees as his future, Jamie is willing to tell him, if he doesn’t laugh. “Um, I, you know, I kinda see myself with a...gettin’ married. Big house. A couple of kids.” After a long pause, “Maybe someday.” So, it appears, this gay-hustling hetero-virginal street boy’s dreams are as banal as they get. Jaime admits that during his long empty days he sleeps and watches movies, so perhaps his movie-sodden hetero-normative daydreams account for a skewed vision of what is even possible, let alone desirable. Yet one feels heart-broken in that very recognition. As Jaime has long ago admitted in the conversation: “I was a dumb kid.” He still is—but a dreamer, nonetheless.

As they are about to finish the interview, the boy asks whether the journalist has any children. Two boys, “not much younger than you,” he answers. “I tell you it breaks my heart to mention them....when...(he moves his hand in the direction of the boy he is answering). I’ll tell you they’re really well taken care of.” End of interview. He pays the boy and hands him is card, suggesting that if ever to he needs to talk  he should call.

Jaime grabs the half-eaten sandwich and stands, ready to return to the street, as the credits begin to roll with the song “Someone to Watch Over Me,” playing in the background.

Mednick himself was only a 19 year-old New York University freshman when he made this film. One of the most simple-minded film commentators ever, Rex Reed gushed over it:

"I am a bit speechless. This is exemplary work...revealing much sensitivity and intelligence. The actors were absolutely first-rate and directed with skill, precision and naturalism… I actually could have hung in there with [these] characters for another hour or so. I am really most impressed by the writing more than anything else—an economy of words, a wealth of style, an almost minimal thrust in dialogue but with maximum believability. [Mednick] has obvious talent... This short film is so good I would be very keen to see what he ends up with in the next few years."

There is no question that there are some very moving moments in this film, and you can hardly take your eyes off the curly-haired cute Ros-Kead as the camera shifts back and forth with head-on and side views of its two protagonists. But I have to return to my original question, what were Mednick’s intentions in making this film? Was it simply to create a moment of empathy between the boy, caught in a highly predictable situation, and his audience? Surely, what he reveals, the tough (boy in this instance) prostitute with a heart of gold, has already been mined by writers such as Eugene O’Neill, John Steinbeck and dozens of other American realists.

I cannot even imagine that this tender portrait of a young boy trapped into playing a role in child sex trafficking might have any impact on societal attitudes or resulted in a single shift in laws protecting our youths. Nor, I should imagine, did Mednick intend his short to effect change.

Rather, I see this work as a kind of porcelain-like cameo of a well-known American type, with perhaps only the shift in the gender of the figure. And perhaps that’s enough to make it a credible contribution to short filmmaking. If only we didn’t have to bear with the sentimentality with which the young director has imbued his gentle etching. I feel a bit like we have been asked to play the role of the guilt-ridden man in Adam Tyree’s short of 2020, Green Light, who has never gotten over his guilt for his childhood sexual encounter with a boy of the same age—without the well-adjusted male prostitute at the other end to assure him that he is now happy in his life and that their sexual explorations did not make him a homosexual. In Mednick’s film, however, I fear Jamie, alas, might never be able to have the imagination to perceive that his life might represent more than the societal mix of aspersions and pity poured upon his endlessly suffering head. Even his friend Helen imagines she can sing.

Posted by greenintegerblog at 5:49 AM