keeping an eye on the steam room

Brian Sloan’s short 1993 film, Pool Days, features a 17 year-old-boy coming to terms with his sexuality, a theme which over the next decade would become ubiquitous in works such as Lilies, Get Real, Edge of Seventeen, But I’m a Cheerleader, Story of a Bad Boy, Stupid Boy and A Brother.

Although it is a pleasant if not totally original look at the dilemma of young men and women living in a kind of mental fog despite what their loins are telling them, Sloan’s film has the advantage of being one of the earliest works of this genre which, along with the brevity of the movie (27 minutes) allows him basically to ignore the parental and social pressures brought to bear upon his child-adult with which the later films had to wrestle. 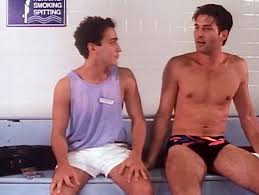 The central character, Justin (Josh Philip Weinstein), apparently has little on his mind except the power of the pocketbook when he applies for and gets a job at a local health club as a swimming pool lifeguard. An affable young man, he accepts the responsibilities of the night shift—as long as his father can pick him up when he finishes work—a time when there are very few swimmers using the facilities, let alone those who are “inexperienced.” His job is so utterly boring that the first few evenings he literally falls to sleep on the job. With a dearth of late users, even the manager doesn’t seem to mind his occasional inattentions. If only there weren’t those complaints about the behavior of males in the steam room! Might Justin, as he scrubs up the locker room, keep an eye out for any sexual activity going on behind the plumes of steam? asks his employer Mort (Richard Salamanca).

As in Andrew Ahn’s later 2016 film Spa Night, “keeping an eye” on something obviously involves becoming a kind of voyeur which can only increase one’s focus on the illegal behavior it represents. Indeed, most of Justin’s work simply involves reminding the club’s users of the rules (the same role I generally had to play at his age when I worked as an ice-skating rink guard). Yet the two individuals which the 17 year-old has to reprimand are seasoned abusers, the health club’s exercise fitness trainer, Vicky (Kimberly Flynn), who upon stopping by to meet the new pool boy, pulls out a cigarette and lights it as she fatuously inquires, “Mind if I smoke?”

Vicky is the kind of woman who believes that simply because of her sexual gender that all males are attracted to her, and she would love to get a chance to have fling with the handsome young boy, so innocent that he can get away with asking her how old she is. “28, just turned,” she mocks him, perhaps having stretched the truth in that statement as surely as her job requires her to help stretch the tendons of the club’s clients.

The other repeat abuser, who dives into the pool against the rules, is the handsome stud of a man, ex-pool boy, now masseur-in-training Russell (Nick Kokotakis) who we know, just from the slower motions of his mop as Justin watches another hunk shower, has a far better chance to apply his rule-breaking talents upon the young boy.

Like a hawk scooping up a young chick, Russell invites the pool boy out for pizza and a visit to his apartment where, after Justin is encouraged leaf through his scrap book, revealing all his past boyfriends, he attempts to apply his massage talents to the obviously intrigued but utterly nervous Justin, assuring his prey that “there’s a lot more to life than just being friends.” 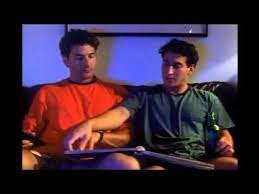 Perhaps one of the charms of this kind of film—at least for LGBTQ people—is recalling all the stupid qualms one had at that age instead of simply leaping into the pleasures of life. Russell even attempts to congratulate himself for trying to help the intrigued kid to come out. But it borders, nonetheless, on blatant abuse, which  often is why the innocent are allowed to remain so a little longer, unless it is forced upon them, often causing trauma.

Russell, fortunately, is a patient would-be lover, allowing the boy to call his father to come and get him, Justin soon after is shown waiting at the apartment building’s door almost in tears emanating from of what is surely a mix of fear and frustration. As his father appropriately reminds him and inquires “It’s one o’clock in the morning” and “Where are you, anyway? The vague answers, “I lost track of time” and “I’m at an apartment...a friend from work,” speak volumes.

Fearing to dive into the waters into which he almost plunged, the recalcitrant lifeguard encourages Vicky to try her female charms. Unlike Russell, Vicky is a “jump first, think later” kind of lady coupling with the cute kid in a back room. When her presumed charms are unsuccessful, she suffers more from self-doubt than empathy for the confused Justin.

Finally recognizing that perhaps he should look deeper into the events going on in the hot spa, Justin dons a towel and slowly scoots closer to another handsome club user, obviously delighted by the unexpected turn of events. But at the very moment when the frightened pool boy is about to test out what really might be going on in the baths, Russell enters, scaring him away from temptation.

It’s apparent that Russell genuinely likes the boy, and now, a bit like Vicky, determines to also take a leap with him into sex. Diving into the pool, Russell appears to hit his head against the pool floor, seemingly lifeless before becoming Justin’s first victim in need of being saved. Even after bringing the “victim” back to consciousness Justin feels the necessity of blowing in oxygen through the man’s lips, which looks to us—and to Mort who happens at that very moment to be exhibiting the pool to a new client—like a series of quick kisses.

Both the life-saver and victim assure the boss that Russell hit his head but is now fine, no need to call the police; but Justin is disturbed by the lie his “friend” has imposed upon him. This time as his father waits to pick up his son, seeing him again with the older man results in a scowl that suggests perhaps, in the future, our young gay boy will have to face new hurdles at home. But for the time being, things are looking up since Russell’s invitation for another pizza date is tentatively accepted.