young man in a pink dress

Daddy is a 2019 film by the 24 year-old director Christian Coppola (a distant relative of Francis Ford). The “daddy” in this film (played by actor Ron Rifkin) is definitely not the father of the younger figure Paul (former Disney star Dylan Sprouse who with his twin brother Cole acted in the TV series The Suite Life and Zack and Cody) with whom he temporarily shares his Plaza Hotel suite. Nor, however, has the wealthy Mr. Smith hired the male escort to have sex. 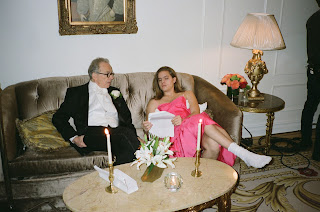 Inexplicably, Paul has been hired to wear a pink gown and play the old man’s wife for the evening as he celebrates their first anniversary since her death. Why Mr. Smith has chosen a male to play this role is never explained, but it also apparent that the young man has been hired to visit the older figure several times in the past. Indeed, at one point when they appear in full attire in the elevator, another regular of the hotel, an elderly woman (Jo Yang) appears to recognize them, commenting “You and your daddy look very handsome tonight.”

Strange as the pairing may seem Rifkin’s character is clearly fond of the boy and orders a splendid feast with fish, meat, wine, mousse, and several other items to consume at their celebratory meal, even though neither of them ultimately eat much of the dinner.

For his part, the young recipient of these attentions is openly fond of his “daddy,” discussing the love-life of Cary Grant and Randolph Scott and other stories out of the older man’s past. When the hour of celebration nears, Paul briefly wonders whether he should call an ambulance—which seems to be a fairly regular occurrence—or whether he should begin to dress him for the dinner.

His “daddy” chooses the latter, with the handsome young man helping him to bathe and shave him. Mr. Smith queries Paul , “You shave old men’s faces often?” Paul answers with total honesty, “Yes. It’s kind of fetish of mine.” Finally the time has come to put on Mr. Smith’s elegant formal tuxedo 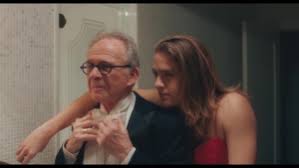 Despite his age, the elder does indeed appear somewhat dapper and pleased by the opportunity to share the evening in the company of Paul, toasting the occasion with champagne.

There is something so absolutely casual and normal about Sprouse’s performance in full female dress that any possible innuendos or queer aspersions are unthinkable. The bellhop who delivers the meal (cute Cooper Koch), states that if they want anything else he will be working all night, hinting that we would be happy to share the company of Sprouse’s pink-clad maiden, who makes no attempt to hide his harry chest. But even here there are no winks or whispers. Paul puts it quite straight forwardly, stating that server seems to be a nice boy.

Interrupting the meal, Paul declares it is time for a dance, and to the music of “We’ll Meet Again” sung by Vera Lynn the two begin a grand waltz around the room with Paul’s face nestled into the elder man’s neck. After a few spins, the old man’s dancing partner momentarily becomes his wife (played by Catherine Wolf) before the scene transforms back into the current moment. The alternation between the two occurs several times, assuring us that the magic Mr. Smith was seeking has worked.

As the song finishes the two are seen back on the bed, Mr. Smith needing his rest from his joyful exertions. Paul asks him if he has ever kissed a male before. No, replies his “daddy.” It’s just like kissing a woman, Paul posits, except you might feel a little stubble that may or may not itch. After looking at his young partner, Mr. Smith points to his own neck.

Paul leans over and kisses him gently, the older man returning the kiss as they exchange the pleasure several times before coming to an end. In a conversation with the director in Interview magazine Sprouse admitted that Rifkin is a good kisser.

The time has come for Paul to leave for the evening, and this time, apparently, forever. Mr. Smith offers to walk him to the door and does so, clearly saddened to see the boy go. We see Paul  now in male clothes, his hair, which we might have thought had a been a wig, pulled back in a male bun. Paul pauses at the door and looks back, Mr. Smith sadly waving goodbye. The door opens and he is gone. But we know that they have left each other with joy and perhaps just a little love. 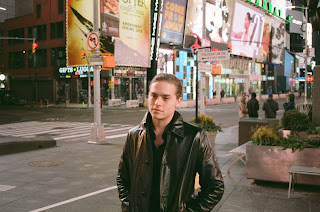 Daddy in this film, it turns out, is anything but the salacious relationship that the popular lexicons might define it as: my Random House Unabridged Dictionary requires you to look it up under “sugar daddy,” which it defines as “A wealthy, middle-aged man who spends freely on a younger woman in return for companionship and intimacy.” A slang dictionary I consulted defined it as a gay sexual term meaning a male who dominates his other male lover. Neither of these quite describes the relationship he have just witnessed between the elderly Mr. Smith and Paul. Perhaps the more normative definition better describes their relationship during the special evening we have just witnessed.

Posted by greenintegerblog at 2:09 AM