In several of gay film innovator Curtis Harrington’s early works there is a dream-like desire for the normalization of life. Picnic of 1948, despite its obvious satiric depictions of that life, almost appears to deify it, beginning with the family arriving in what appears to be at different moments a desert rock formation, a Russian-like tundra, and a seaside cliff near the ocean, the wind fiercely whistling and whipping through the rocky landscape so intensely that it pulls at the dresses of the central figure’s mother and sister, hardly permitting them to lay the tablecloth upon the sand let alone open their white paper-wrapped sandwiches. 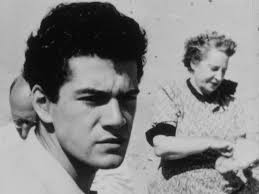 Almost before the family is seated in the sand—reminding one vaguely of Albee’s play of 11 years later, The Sandbox sans Grandmother—the son turns away from the family (played by the director’s own family) to scan the horizon of the beach where he is intrigued by the sight of a woman dressed in a white gown literally leaping down the strand, almost—for those of you who have seen the director’s 1961 film Night Tide—like a land-bound mermaid, disappearing into the perspective. 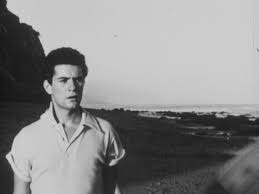 The handsome young man in a white open shirt impetuously chases down the beach after her, but pauses as a man, dressed all in black and carrying a closed umbrella, passes him. For a few moments our hero seems intrigued and turns back to observe the man moving down the beach in the opposite direction, the highly distressed string music of composer Ernest Gold that has been accompanying the young man’s actions coming to a crescendo as the young man discovers that in the meantime the rising tide, with the white foam of its waves, has begun to encircle his shoes.

Looking up he sees a high cliff which my stretching out his hands above his head he miraculously climbs with the help of the imposition of his image against the rock formation by the camera.

When he finally reaches the top, he turns back to look below, again observing the man in black, this time with an open umbrella ambling down the beach.

Continuing on his adventure, the young man wanders briefly through what appears to be sand dunes or, given the intentionally overexposed black-and-white image, might be a snow-covered outcropping of rocks. Either way, it is almost uninhabitable territory until he reaches what appears to be a wooded area, where he is now forced to climb through brambles. As he reaches open space, he looks down a hill to again witness the woman in white. turned away from him her hands opened outward almost as if she were leaning upon an invisible ledge.

He walks down the stairs of what might almost be an excavated ruin of an old mansion, finally joining her, witnessing her face shaped by her blonde hair for the first time, a face that looks suspiciously like the sister he has left behind in the picnic scene. He kisses her on the cheek, and, as if she were sleeping beauty suddenly awakening, she takes hold of his hand.

Together the two trip through a misty landscape before they join both hands and spin about several times, quickly turning faster and faster in an almost comic mania that might remind us of the pop-satire of anything and everything, Airplane! in which Julie Hagerty and Robert Hays become so caught up with the disco gymnastics of the Bee Gees’ “Staying Alive” that Hagerty rockets her spinning partner Hays into outer space. 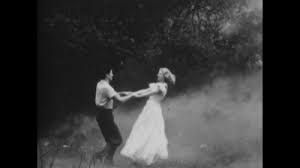 Through a nearby window he glimpses his princess now lying upon a bed, her hands clasped together as if she were dead. He turns away from her, the camera catching his beautiful face in silhouette as tears gather under his eyes.

When he turns back she is no longer there, having been pulled out the window and, soon after, being carried up on a long staircase by a man, also in black, but this time appearing eerily to resemble, from the back, Frankenstein’s monster (Harrington was a great fan of horror films and helped to get James Whale’s The Old Dark House restored, becoming a friend of the Frankenstein director late in Whale’s life and advising director Bill Condon on his film about Whale, Gods and Monsters).

In one of the most remarkable scenes of this dream-play the hero leaps out the same window and chases the monster and his “bride” up a seemingly endless staircase. At first he seems to be able to quickly sprint the stairs, but almost immediately after falls flat and is forced to climb the stairs on his belly, painfully moving up the vertical expanse a bit like he had previously done with ease earlier on when he cinematically climbed to the top of the cliff. 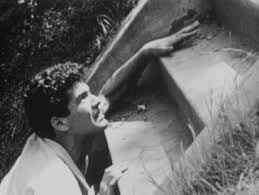 But this time there seems to be something almost dragging him down, preventing him from following the monstrous figure holding the woman in his arms. Perhaps her once innocent mien now corrupted by death holds him back. Perhaps he has has simply lost interest in his former quarry and is struggling against his own self in his attempt to reclaim her. It hardly matters since the figures he is chasing have now reached the plateau.

As if released from the chase, he suddenly regains his footing and races up the remaining steps to reach their end only to recognize that he now momentarily balancing himself at the edge of the cliff before falling through space into the ocean. The man in black, his umbrella again closed, is seen once more walking away to the left of our viewpoint.

Our hero's prone body can be seen rolling in with the tide the way it previously roiled about his feet. Three men come rushing to the rescue, bearing his body back toward the picnickers in a manner that reminds us of a pietà—surely Harrington’s personal reference to a similar scene from his friend Kenneth Anger’s Fireworks, released a few months earlier. 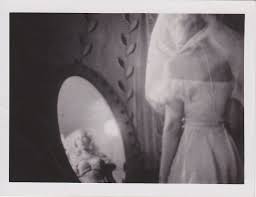 The screen goes dark. When the light returns we see the young man lying in what appears to be a coffin, flowers surrounding the corpse around whom his family has gathered in what appears to be their house. The woman in white, her veil flowing in the wind, is turned away from him looking into a mirror since she no longer has anyone else to admire her. We see the man in black, for the first time witnessing his handsome visage at the front door as he rings the doorbell rings.

Is the man in black death or a potential male lover arrived too late? I read it differently: the dead boy is the young man of the past who attempted to embrace a conventional sexuality he was unable to, symbolically killing his old self in the process. The gentleman caller at the door represents a new lover for the son who his family members and former girlfriend will never know and henceforward they will never be able to visualize as he was. Like Christ, our hero has been resurrected into a holy life of the ever after. He has had to die in order to stay alive. The figure at the door may even be the young man himself come to redeem his own body.

If my reading may sound a bit like an answer to a riddle, forgive me. For Harrington’s films, if attended to carefully, are as apparent as a dream consciously imagined. And all of this accomplished, amazingly, in only 22 minutes.

Posted by greenintegerblog at 1:57 PM