Daniel Ribeiro | Café com Leite (You, Me and Him)

Brazilian director Daniel Ribeiro’s first film of 2007, Café com Leite (You, Me and Him) , released seven long years before his acclaimed The Way He Looks, is clearly an apprentice work—although it won the Crystal Bear for best short film at the 2008 Berlin International Film Festival and played in numerous international film festivals. Certainly, part of its appeal is the quiet gentleness with which it tackles its quite difficult subject of how to develop and sustain a gay relationship when suddenly faced with new family responsibilities that the central character of this work imagined he was just about to escape.

The short film begins with two lovers, Danilo (Daniel Tavares) and Marcos (Diego Torraca) in bed, evidently after having just enjoyed a sexually satisfying night. Having made enough money to finally leave his parents’ home and rent his own apartment, Danilo invites his lover to move in with him which Marcos correctly interprets as a marriage proposal which he quickly accepts, the two engaging in pleasurable kisses and planning to convert their previously planned anniversary vacation into a honeymoon.

By the time Danilo reaches home, however, he discovers that his parents have just been killed in an accident, leaving his young brother Lucas (Eduardo Melo) home alone, hunkered down in the hallway in tears as he awaits his brother’s arrival.

If there is something inexplicably clumsy about this sudden switch of fate, the results it brings are all too realistically portrayed, as suddenly Danilo, having little time to adjust to becoming a father to Lucas, must not only endure their mutual suffering—on that first night Lucas crawls into Danilo’s bed while pleading that he keep his shoes on, surely a kind of mixed message of needing his brother’s love while still not sure if he might not want to get up and leave his comfort—but must learn to cope with the boy’s dining whims including such simple tasks as making sure Lucas is washed and properly dressed before he drives him off to school. The film’s title, in fact, is taken from Lucas’ demand for chocolate milk properly heated to just the right temperature in the microwave. 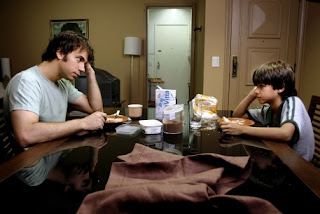 For the first week there is hardly time to think about his relationship with Marcos, let alone to find a way to engage in sex with him in their shared bed next to Lucas’ bedroom. And both men, along with the film’s viewers, fear that their deep love may not survive the radical changes in Danilo’s life, who insists that his brother remain in his care instead of being shipped off to a distant uncle and aunt.

There are, as well, the unsaid issues of the two men’s past that Lucas is well aware of. Apparently, although Danilo’s father loved Marcos as his son’s friend, upon discovering the true nature of their relationship turned against him within the confines of home, perhaps not witnessed by Danilo but certainly not lost on his little brother. 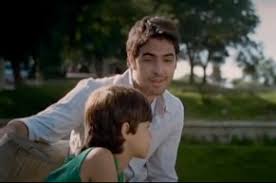 Ribeiro nicely handles this material nicely by having Marcos pick up Lucas from school one day when Danilo is busy at work. As the two warily greet one another, Lucas, like most children who are openly honest in expressing their feelings, admits that his father did not like Marcos and wonders aloud whether or not he must take the same stance against his brothers “boyfriend,” a concept which he just vaguely comprehends. As Lucas explains, “He was always arguing with my mother about you.” Having just having had a discussion with the boy about Lucas’ girlfriends, most of whom, for adolescent reasons, no longer like him, Marcos suggests that what he is expressing is the reality of change, the fact that things can be altered either by one’s own decision or by circumstances. Before their almost magical meeting ends, Lucas has decided that indeed does “still like” Marcos despite his father’s disapproval.

Yet we still sense the boys’ resistance to the change when that night Lucas asks if he might sleep between the two, but clings to his brother entirely while ignoring the “boyfriend.” 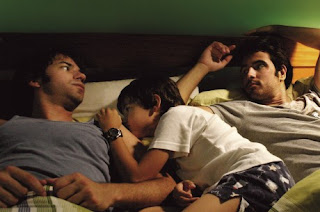 It is clear, as Marcos rises inordinately early to leave the house, that the intimacy he previously had with Danilo is no longer possible given the need for the two brothers, still in grief, to bond. Soon after, he decides to use his “honeymoon” ticket that Danilo now cannot.

Nearly all the blurbs and small commentaries about this film suggest a positive ending, positing the possibility that they simply will need to learn how to all live together.

The film ends with a beautiful attempt at just that, as Danilo, with several glasses of milk set out before them works with Lucas to test various microwave temperatures to bring the boy’s chocolate milk to the perfect warmth. But there is no assurance in Ribeiro’s tender film that Marcos may, upon his return. restore that the same “warmth” with his lover. As Ribeiro reveals in The Way He Looks his sensibility is so sweet that it is hard to imagine things will not work out in the end, that people can change their feelings and readapt. Yet in this small gem, the director gives us no assurances while still buoying up with his fragile work with hope.

Posted by greenintegerblog at 7:38 AM