Interested in all bodies in motion, human and animal, photographer and early cinema pioneer Eadweard Muybridge might certainly have portrayed two men embracing or kissing had it not been a subject so controversial at the time that it would have been characterized as pornography. 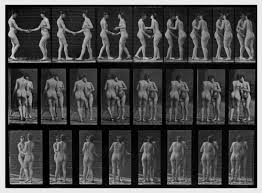 Amazingly, perhaps the first human kiss we have recorded on film, accordingly, was between two nude women, models Muybridge hired to reenact an everyday event. Men might only be shown engaged in sports such as fencing, boxing, wrestling etc. or, in one case, even posing together in frames that might remind us of the beefcake photos by Bob Mizer, Bruce of Los Angeles, Douglas of Detroit, Lon of London and Walter Kundzicz of the 1950s and early 1960s.

If for Muybridge there was no sexual narrative behind this short compilation of images—let alone lesbian or homosexual implications— yet it is nonetheless fascinating that a same-sex kiss is recorded in his 1887 clip that would later be countlessly repeated throughout the centuries since he first captured it.

Reprinted from My Queer Cinema and World Cinema Review (December 2020).

Posted by greenintegerblog at 6:51 AM