Edwin S. Porter, famed for his memorable films Jack and the Beanstalk (1902), The Great Train Robbery (1903), and The Prisoner of Zenda (1913) and his pioneer cinematic inventions as well for heading the Edison Manufacturing Company and the Famous Players Film Company, was a legend of early Hollywood.

But in 1901 he and his co-director George S. Fleming shot a comic one-reeler of two minutes in length which might have been negligible if not for one fact. The film’s events are humorous, although the actor misses an important cue which I’ll mention shortly. But to call it clever would be an outrageous exaggeration.

An old maid—the stereotype of a physically ugly, spiritually undesirable woman— enters a photograph’s studio, for what purpose we cannot imagine since the eyesore we glimpse surely has no visual admirers.

The Edison Catalog of the day describes the “plot” perfectly:

“An old maid is walking about the studio while the photographer is getting his camera ready. She first looks at a hanger [a gathering of small photographs], which immediately falls from the wall, not being able to stand her gaze. Then she looks at the clock, and her face causes it to fall to the floor with a crash. She then walks over to the mirror, which suddenly cracks in several places. The photographer then poses her. Just as he is to press the button the camera explodes with a great puff of smoke, completely destroying the camera and demolishing the studio. The picture finishes up with the old maid tipping back in her chair and losing her balance, displaying a large quantity of fancy lace goods. A sure winner.”

Unfortunately, the actor who plays the old maid responds to the photographer’s camera too early, leaping backwards just before the camera explodes. As a commentator explains it, in those days when several pictures might be shot in same afternoon, “it never occurred to Porter to do a re-take.”

This series of absurd events may have certainly won over its audiences for a few moments, but I should imagine that it wasn’t a movie that they took home to describe to their families or could even recall the very next day.

It interests me and possibly my readers, and perhaps was memorable even to its original audiences only because the “pinch-faced.” long-snozzled” old maid was played by Gilbert Saroni, the acclaimed female impersonator who performed in vaudeville, minstrel shows, and in other films such as The Old Maid in the Horsecar (1901), The Old Maid in the Drawing Room (1901, reviewed below), The Old Maid’s First Visit of a Theatre (1903), The Old Maid’s Lament (1903), and numerous other “old maid” movies along with Goo Eyes (1903), The Lost Child (1904) and in that same year the far superior short, Meet Me at the Fountain, which I also review in these pages.

In Screened Out: Playing Gay in Hollywood from Edison to Stonewall, Richard Barrios writes of cross-dressing and Saroni in particular:

" It was all in fun, an extension of what audiences had seen in vaudeville houses, and most hints of sexual suggestiveness come only retroactively. Nevertheless, putting drag in front of a close-up camera made for a different dimension, heightening the ambiguity as it weakened the illusion. In the very early 1900s, a skinny comedian named Gilbert Saroni appeared in a series of short Old Maid films that now seem like utter low campfests. The Old Maid in the Drawing Room (1901) is a good example: Saroni (with perhaps three teeth in his head) carries on in prissy affront, and the spectacle seems less suited to a drawing room than it does a Greenwich Village bar minutes before closing time." 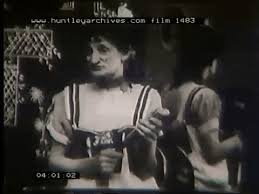 Barrios pretty well sums up Saroni’s very short performance in The Drawing Room where the actor, dressed up in full female attire stands against a wall, the fan in his right hand in almost constant use, while he flaps and flings his wrists of the other while telling, evidently, a “not to be believed” story as he smiles and exposes his gums as if to accentuate his tale’s absolute incredibility.

Posted by greenintegerblog at 10:14 AM