who and what you will

Eugene Mullin and Charles Kent (screenplay, based on the play by William Shakespeare, and directors) Twelfth Night / 1910

Moviegoers in the early part of the 20th century obviously enjoyed works that dealt with gender confusion and transvestism. Given the number of films that survived, one can only imagine that dozens of others were lost among the thousands of films allowed to decay or were destroyed by fires and nitrate damage.

It comes as no surprise, accordingly, that in 1910 directors Eugene Mullin and Charles Kent released a silent version of William Shakespeare’s great comedy Twelfth Night. Although one immediately ponders over such many seemingly misguided effort to treat the bard’s generally stolen stories as something to be plundered while ignoring the language in which he elevated his plots into masterworks of drama, it is also clear that the directors of the work cared enough about the original to basically embrace the drama’s central elements in a 13-minute, one-reeler while incorporating snippets of Shakespeare’s language within the film’s informative intertitles. The sets and costumes, moreover, were quite lavish considering that the motivation for their picture was to entertain their audiences with a somewhat complex story of cross-dressing.

Viola (Florence Turner), if you recall, is saved from a shipwreck in which her twin brother, Sebastian is presumed to have died; having retrieved only her brother’s trunk she determines to dress in his male attire to seek out employment in the court of Orsino (Tefft Johnson), who pines for the love of Olivia (Julia Swayne Gordon). 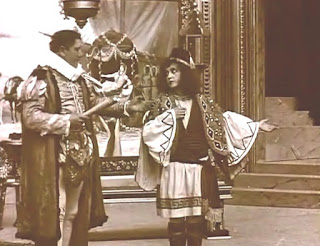 Seeing the handsome young man (Viola pretending to be Cesario) Orsino immediately employs him as his page. Viola finds herself falling in love with the man who, because of the youth’s beauty and demeanor, chooses her male persona to deliver a message to Olivia and court her in his name. On the surface, in short, the budding relationship between Orsino and his page is a gay one, while the girl dressed as a boy is now asked to engage in a lesbian encounter, which becomes even more problematic when, upon seeing and hearing Orsino’s page, Olivia falls immediately in love with the youth 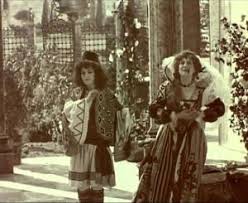 In Mullin and Kent’s abbreviated version the shenanigans of Sir Toby Belch, Sir Andrew Aguecheek, and the maid Maria, who convince Olivia’s steward Malvolio (played with proper pomp here by Charles Kent) that Olivia is in love with him, almost gets lost given that women’s obviously overwhelming passion for Cesario/Viola.

The sudden appearance of Sebastian (Edith Storey) saves the day, as the twin falls in love with Olivia, for her a perfect replacement for Cesario when he reveals himself to be Viola, permitting Orsino suddenly realize he is truly in love with his former page.

Much later in the century Preston Sturges would play the same twin exchange and double it in his The Palm Beach Story (1942); but here Mullin and Kent outdo even Mozart’s switch-hit pairing of lovers in Così fan tutte by using a female actress to play Sebastien, thus suggestively marrying off Olivia into a lesbian relationship after all.

Storey, as I write below, played the young boy, Billy/Bobby in Billy and His Pal, a year later. And among the more than 150 films she acted in for Vitagraph Studios, she played men in several films, partly on account of her athletic abilities—she was an expert horseback rider—and typecasting: she was Oliver Twist in the first film version of Dickens’ work in 1909 (see my review above), and Billy the Kid in the 1911 film of the same name (a film now declared lost)—although Storey’s Billy is a female raised by the Sherriff to be a cowboy. In 1911 she also starred in the strange transsexual work, changing through the ingestion of magical seeds, from a woman into a man in A Florida Enchantment, which I also review below. Storey later signed with Metro, making another 75-some films before retiring at the age of 29 in 1921.