even the clean eventually get dirtied

As Herve Picard noted in connection with the two films restored by the French Cinémathèque in 2016 which I am about to review:

“Traveler, musicologist, collector, enthusiast, François Reichenbach was everywhere and was interested in everything. Legend has it that he was always present at the right time: when he started up his camera, something unforeseeable happened in front of the lens. He turned with unparalleled ease, the camera was the extension of his arm, the viewfinder his third eye and the image the reflection of his desire, that of capturing unusual and poetic images. His life will be constantly driven by this desire to film bodies, wild landscapes and cities, to record sounds and voices.”

Moreover what the French have long known that international audiences rarely perceived is that Reichenbach also was an openly gay man for most of his life, and very early in his career directed two short gay films in 1954, influenced by both Jean Cocteau and Jean Genet, the earliest of which, Last Spring, is acclaimed by many to be one of the best gay films ever—most certainly of its time.

Writing on Last Spring and the accompanying, only slightly longer “footnote” to the other, Nus masculins (Male Nudes), film critic Călin Boto describes a distinction in French filmmaking and literature between two opposing traditions of representing homosexuality, the gay or “homophile” one and the “queer” one. Boto further explains the distinctions:

“The first one was in the air at the time when [Genet’s] Un chant d’amour was shot and released. A post-war activist movement, homophilia used a humanistic discourse to oppose laws that incriminated homosexuality. One of its recurrent preoccupations was to desexualize the LGBT+ community, an eternal obsession of its detractors. Meaning, if you prick us, we bleed. Well, it’s clear that Genet wasn’t all that preoccupied with homophilia. Because the flaming creatures that he himself sets alight in his short fiction, the thieves, the bandits, the slobs, the immigrants are far from the positive examples that homophilia was trying to push to the front. Genet is too dirty for the homophiles and anticipates the impious attitude of the queer movement. If you prick us, it will turn us on. Just a few minutes from the film, which encompass the short oneiric escapade of the two jailbirds into nature, can be attributed to a homophile heritage. Gentle touches, running around through the trees, flowers as sexual metaphors, a love set in the middle of nature, because nature cannot be dirty, and so any act of love that takes place in its midst is cleansed of its social stains.”

Unlike Genet, Reichenbach was a true homophile, presenting his figures in both films in natural settings, from which only in Last Spring does one character “stray.” For this very reason, certainly compared with the highly poeticized presentations of gay life by Cocteau and the raw blood and sweat depictions of Genet, Reichenbach’s two short works may seem, as Boto suggests, somewhat “dim.” “We can call them notes, because that is what they actually are, since both give off an air of incompleteness. Even if they are to be taken together, as they should be, the sensation doesn’t dissipate.” 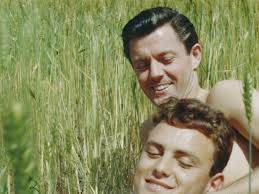 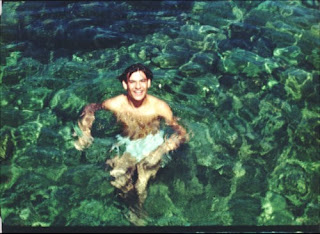 When I first watched Nous masculins—which features very few nudes and even when it does, primly places their bodies in fields, forests, and streams—I found the film almost to be effete, with its prettified pictures of good looking boys wandering through gardens, posing with statues, or visiting piazzas, churches, and other tourist-like destinations throughout Europe. It reminded me of the numerous coffee-table books of photographs of males dressed, partially undressed, and nude by photographic artists such as, George Platt Lynes, Imogen Cunningham, Minor White, Larry Clark, Dave Martin, Brian Harris, and so many others. Even the numerous physique photographers of the 1950s and early 1960s appeared to be more interested in the only slightly hidden—and accordingly provocatively forbidden— sexuality of their subjects in comparison to the men filmed by Reichenbach in what is often described as his cinematic “travelogue.”

Certainly, the young Taormina boys and adolescents who posed for turn-of-the-century photographer Baron Wilhelm von Gloeden were imbued with more sexual potential and, on the part of the photographer of more sexual interest than the French director allowed his handsome Italian men, like the one walking the stairs of Forio, Ischia’s famed Chiesa del Soccoroso, to betray.

Nonetheless, there was no question here that the director was focusing his gaze almost exclusively upon the dozens of handsome male individuals almost as if he couldn’t get enough of his seemingly voyeuristic pleasure. And when he finally reaches New York, the males he follows in tight denim jeans smoking alone or sharing a cigarette, and the men who inhabit Central Park, some seemingly romping rather campily in what appears to be a fashion shot, appear to elicit a subtle narrative that more fully involves the filmmaker. 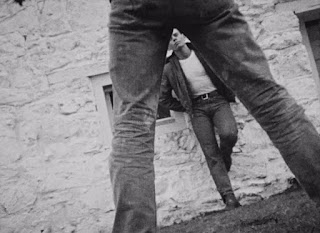 Boys in skin-tight denim sharing a cigarette also are the stars of his far more significant gay narrative work, Last Spring. Here too the young men at the center of the piece do not actually engage in sex or even take off their clothes. They needn’t, given the way the camera positions them neck to neck, hands spatially stretched toward one another’s crotch, and their physical acrobatics in the apple trees and other nearby natural spaces. These two James Dean look-alikes most definitely are a couple in love who sensuously portray their sexuality as surely as if they were engaged in a balletic tango.

This is a totally romantic vision of homosexual love, a love that although almost idyllically presented in the earliest scenes has the potentiality for a much more dramatic and queer-tragic ending. We have hardly observed but a few moments of their exuberant interchange with their bodies alive in nature than we begin to hear the highly romantic strains of the Baroque composer Tomaso Albinoni’s Adagio in G Minor which, in this context, might as well be Arnold Schoenberg’s Verklärte Nacht in its dark tonal presage of desire and loss. 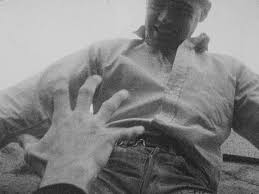 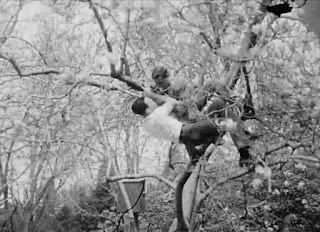 One might almost argue that if Last Spring begins as a homophile telling of gay love, it soon moves to a queer telling as one of the boys travels, for what reason we are never told, to the city, leaving the other behind in growing despair as day by day he expectantly visits his mail box only to find it empty.

What begins as a joyful interlude between what appears to be an expectation of the other’s return, gradually shifts to a more poignant version of “Johnny’s so long at the fair.”

Johnny's so long at the fair.

Indeed, as his lover begins imagining what might be happening to his friend in the city, as Boto puts it, “a foreign and dangerous place, a playground of hotels and seamen, subways and dive bars,” he also recalls the joys of their past, including the two of them attending a rural fair, riding a merry-go-round, playing games on the midway, and watching the clowns which, in his fears, quickly are overlaid upon his nightmare images of the city, the midway turning into a neon-lit main street that is precisely the “dirty” queer world that tortures his thoughts. 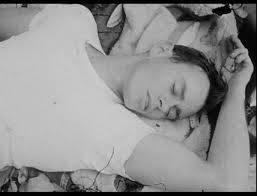 In an amazingly surreal scene as he sleeps under the apple tree of his “last spring” his imagination conjures up a frightening adventure in which he travels to the city in an attempt to bring back his now drunken lover, who still eludes him, forcing him to chase after his loved one with the hope of restoring their bucolic existence.

Yet the more he chases, the faster his lover disappears as the entire scene is transformed almost into a modern balletic expression of his fears in which he is forced to climb to a seemingly forbidden temple atop a hill where his lover stands someone like a god—a figure perhaps of his own making. By the time he finally reaches the summit the lover has seemingly disappeared, his after-image only vaguely being reflected into a small pool of water into which the would-be redeemer peers only to now witness his own reflection, like a Narcissus who has no one other than himself left to love. Stranded in a natural world that once seemed to protect his and his lover’s innocence he must now face the horror of a world emptied by a society willing to tear the gay couple apart. The apple leaves falling upon his nightmare-ridden body can now only remind him of the Eden he las lost.

Reichenbach, accordingly, has pulled the two strands of French homosexual representation together to suggest that those who also bleed can still be tortured by a society that transforms their innocent love into a luridly destructive act. No short gay film, to my knowledge, has better expressed the repression of homosexual love by what is clearly an unstated homophobia. In such a world even the clean eventually is dirtied, denigrated, destroyed.

Posted by greenintegerblog at 3:20 AM